What are stablecoins? How many types are there? What are they used for? Can you invest in them? What is their future? This article has the answers to these 5 questions. Words: 2346

By Lorimer Wilson, Founder & Managing Editor of munKNEE.com and a frequent contributor to eResearch.com, usfinancepost.com, bitgrum.com and talkmarkets.com. An abbreviated version of this article first appeared on bitgrum.com under the title: Stablecoins: What You Need To Know

According to Alex Gailey, in an article for time.com/nextadvisor:

According to 101blockchains.com, it’s quite simple:

These are typically categorized into four different coins as pointed out by 101blockchains.com:

Source: 101blockchains.com (the world’s leading online independent research-based network for Enterprise Blockchain Practitioners. Subscribe to 101 Blockchains to get all the latest news about blockchain)

(Most of the information that follows are edited and abridged excerpts from an article from 101Blockchains.com.) These are backed up by fiat money and, as such, it’s somewhat of a digital form of fiat money and because of that these types of SCs have real money backing them up from the banks. This infrastructure makes the overall concept of decentralization somewhat invalid, however, because ultimately the cryptocurrencies are being controlled by the banks, which is a centralized system.

These are backed up by commodities such as gas, valuable metals, etc., with the most common one being gold which will always be tradable because you’ll always find demand for this metal and you will always have a specific value assigned to each of the coins.

These coins are backed up by a mix of different cryptocurrencies which prevents any volatility risks. If one of the cryptocurrency has a massive price fall then the other currencies can back up that fall ensuring a stable value for the tokens.

These coins don’t have any assets to back them up; rather they use an algorithm to burn or add crypto to stabilize the value and a governed approach that ensures the expanding or limiting of coins on the network whereby, if the demand increases, new coins get minted, and it stabilizes the price hike with the primary objective to make the value as close to $1. 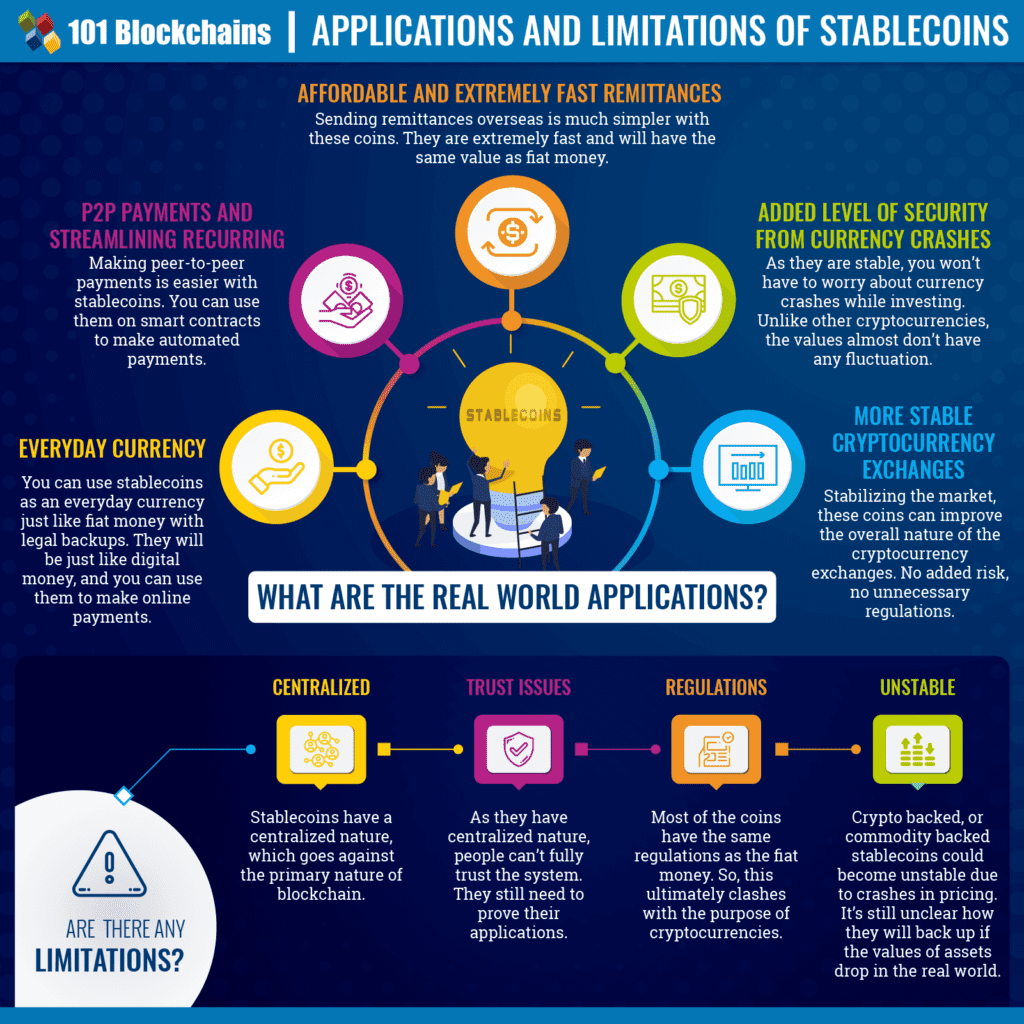 Source: 101blockchains.com (the world’s leading online independent research-based network for Enterprise Blockchain Practitioners. Subscribe to 101 Blockchains to get all the latest news about blockchain)

Another way to look at SCs, according to dmarge.com, is:

The most popular SCs are:

SCs don’t make for great investments and, as such, are better suited for digital transactions and converting digital assets to and from “real” money.

There is not much in the way of government oversight or regulations related to SCs but, because of their potential for future use by everyday consumers to buy things and operate outside the U.S. monetary system, we are likely to see an effort to do so by federal monetary authorities as the year unfolds.