where fair value might be. I believe that we will see the market return to a more reasonable forward P/E of 13, sending SPY to $150.00 – or another 5 percent decline. [Let me explain further.]

So writes Mark Meadows in edited excerpts from his original article* as posted on SeekingAlpha.com entitled SPY Has Another 5% To Fall.

Meadows goes on to say in further edited excerpts:

There is a 0.87 correlation between the Federal Reserve’s balance sheet and the S&P 500. Given that correlation (over the past five years) it is only logical that Bernanke’s announcement that he will begin to taper would send stocks headed lower. 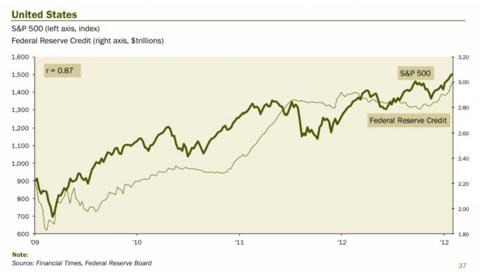 While Q1 saw record profits, the basis of corporate earnings was cost cutting, sending up a caution flag for future margin growth. Revenue growth has lagged growth on the bottom line. First quarter revenue growth was expected to come in at 1% – compared to profit growth of 5%. In addition, less than half – 200 – of the S&P 500 were expected to report revenue growth of 5% or more.

Without revenue growth driving profits higher, companies will have to continue to look to increase margins – something that naturally becomes increasingly challenging. As the below chart demonstrates, profit margin is near 2007 highs. 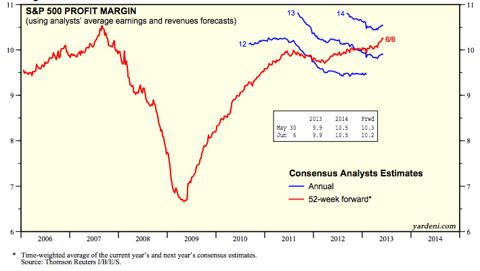 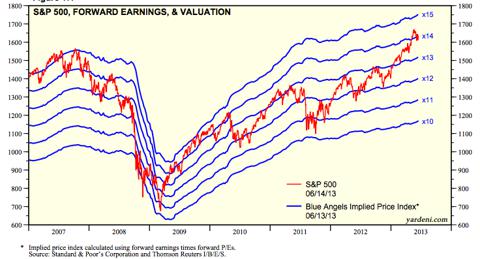 However, in an economic climate where real GDP growth is anemic and real disposable personal income shrunk in Q1 at the fastest rate since 2009, I believe that this forward valuation is rich.

Fundamentally, the S&P 500 rallied through Q1 earnings season, though at this time, the market was still on a QE3 high. As noted above, earnings last quarter were not particularly strong, with weak revenue growth despite record profits.

This earnings season, I will be watching to see if companies start to report more top-line growth that trickles down to the bottom line. If we see a trend, it would not be surprising to see the SPY shake off these recent losses and move back towards recent highs but I believe that is a big mountain to climb.

Given that the bottom-line corporate growth has been driven more by cost cutting than economic expansion, and the impending Fed tapering shrinking the Fed’s balance sheet, returning to a recent, more conservative valuation of 13 times forward earnings seems in the cards – putting the S&P 500 index at 1,500 given current expectations.

1. 30 Analyses of Why Stock Markets Are Tanking – Finally