The magnitude of current private and government debt, coupled with massive 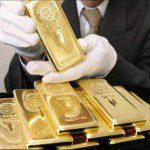 unfunded contingent liabilities for promises of future services to their citizens, will prove to be impossible for many nations to fund. Massive inflation in the money supply will become the preferred vehicle to deflect the default monster and will result in vastly devalued currencies and price inflation as a prelude to default. Such action will be a desperate attempt to buy time to stave off the inevitable and will result in social unrest caused by persons whose comfortable lifestyle and elevated standard of living is about to disintegrate before their very eyes. Words: 926

So says Arnold Bock (www.FinancialArticleSummariesToday.com) in an article edited by Lorimer Wilson, editor of www.munKNEE.com  (It’s all about Money!), for the sake of clarity and brevity to ensure a fast and easy read. Please note that this paragraph must be included in any article re-posting to avoid copyright infringement.

Bock goes on to say:

What is ‘Sovereign’ Debt?
In its simplest form, ‘ sovereign’ debt means ‘government’ debt, the financial debt of a country. It usually also means the accumulated debts of government sub-entities such as states, provinces, municipalities, agencies, boards and commissions for which the senior government is ultimately responsible.

While existing government debt is the problem for today, contingent liabilities for promises of future services to its citizens dramatically complicates the current debt problem. Unfunded future liabilities are obligations which represent the one ton gorilla peering through the front window of many nations.

What does Debt ‘Default’ Mean?
‘Default’ is a word similar to the word ‘bankrupt’ when referring to the inability of a private individual, business or institution to meet its financial obligations. When debt is unable to be repaid, a formal declaration of this fact triggers a bankruptcy in a court of law. In the case of government, the inability to pay its accumulated debt from past spending, because it can’t raise adequate taxes or borrow additional funds, means that the government has become insolvent forcing a formal default on its debt.

Which Countries are Most Likely to Default?
Economists Reinhart and Rogoff comprehensive research covering several hundred years of economic history determined that countries that reached debt levels of 90% of their GDP, rapidly descended into the flames of default hell. Specifically they found that when government debt-to-GDP rise above 90%, it lowers the future potential GDP of that country by more than 1% and locks in a slow-growth, high-unemployment economy. The authors point to history that shows that public debt tends to soar after a financial crisis, rising by an average of 86% in real terms. Defaults by sovereign entities often follow. That being the case, it certainly raises a very red flag as to what we can expect the future to hold for the U.S. and the U.K. let alone Japan, Spain and Italy.

Given that current interest rates are at multigenerational lows, it seems entirely plausible that when interest rates start rising, the burden of higher interest rates on the bonds issued to secure additional borrowed funds, will become virtually unserviceable.

What are the Common Characteristics of Debt Default Candidates?
Many countries are advanced first world economies with high standards of living. Most share political traditions and values whereby the welfare state ensures high living standards and guarantees protection and security against most of life’s challenges. Such cradle to grave security requires ever higher levels of savings and investments which result in wealth generation and serve as a growing tax base sufficient to deliver on promises of current and future benefits, especially with the universal demographic of rapidly aging populations.

Virtually all countries subject to concerns about default, however, show shortfalls in economic growth resulting in anaemic tax revenues requiring more credit and borrowing in order to compensate.

Can Debt Default be Avoided?
Financially broken nations will be funding other financially broken nations. Does that seem like a workable plan? What happens when the banks which are creditors of these nations line up for assistance again, as they did in late 2008? Who bails them out this time when their own governments are broke?

Can sovereign debt default be avoided? Unfortunately, it doesn’t look like that is in the cards.

Where Should You Invest in Times Such As These?
Precious metals are ‘Real Money’ which will be your safe haven during the very financially troubled and volatile period ahead and shield you from the rampant inflation and currency devaluations that are on the horizon.

As such, I believe that investments in gold and silver in the form of bullion or mining company shares, complemented by investments in other commodities such as select base metals, oil and gas and agricultural grains, will give you peace of mind.

Share
Previous Here's to Facebook: A Tribute to Entrepreneurship That is Long Overdue
Next What Latest QE Means for the U.S. Dollar and the Future Price of Gold