By smoothing out the effect of the business cycle on corporate earnings,

investors get a truer picture of how expensively or cheaply stocks are priced. Yale professor Robert Shiller has popularized this concept and packaged it as the Shiller P/E ratio, alternatively known as the cyclically-adjusted P/E (CAPE) ratio, and it has become a widely followed and efficacious stock market valuation measure. Currently the ratio is standing at a 21.4 (approximately 30% higher than its long-term average) causing many value investors to adopt a cautious stance toward US stocks. [Let me explain more fully.] Words: 690

So says David Larrabee (http://blogs.cfainstitute.org) in edited excerpts from his original article* entitled Asness: Shiller P/E Is Signaling Risk Of Another Lost Decade For U.S. Stocks.

Larrabee goes on to say, in part:

One of those is Cliff Asness of AQR Capital Management who, in “An Old Friend: The Stock Market’s Shiller P/E,” presents his most recent analysis of the Shiller P/E ratio, which suggests that the next decade could very well be another period of subpar returns for equity investors. 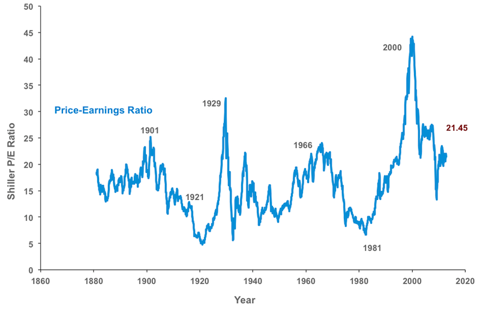 The Shiller P/E divides the inflation-adjusted price level of the S&P 500 Index by its average real reported earnings over the prior 10 years….A key presupposition of the Shiller P/E is that profits are mean-reverting and that by eliminating earnings peaks and troughs, investors are left with a more stable valuation measure. For this reason, Asness considers the Shiller P/E to be a superior, if imperfect, alternative to focusing on one year of trailing earnings.

Asness notes that the Shiller P/E is currently higher than 80% of the time since 1926. He examined S&P 500 Index real returns over rolling decades since 1926 and sorted the data into deciles by starting Shiller P/E ratios.

While it has correctly signaled most major market tops over the past century, Asness concedes that the Shiller P/E has also been shown to be wrong for extended periods of time, which is why he considers his analysis most useful not as a trading tool but for setting investor expectations about future stock market returns.

Critics of the Shiller P/E, including Wharton professor Jeremy Siegel, author of Stocks for the Long Run, often point to the two severe earnings recessions of the last decade as an aberration that unduly distorts the ratio. Asness responds by noting that 10-year real earnings used in the Shiller P/E calculation are actually above their long-term trend. Further, he argues that the huge collapse in earnings was due, at least in part, to earnings being “borrowed from the future.”

Siegel prefers to focus on prospective earnings or trailing earnings, and, perhaps not surprisingly, is widely recognized as being a long-term bull on equities. In a recent article titled “The Case for Dow 17,000,” [Read: Jeremy Siegel: 50% Chance of Dow  Reaching 17,500 By The End Of 2013! Here’s Why] he revisits an earlier prediction that US stocks could rise over 30% by the end of 2013 and, despite a sluggish domestic economy, the approaching fiscal cliff, and recession in Europe, he remains optimistic with this call. Siegel notes that, historically, extended periods of market weakness are followed by market strength. He adds:

Specifically, when stock returns for the preceding five years fall in the bottom 25% of all five-year returns, as did the returns from 2007 through 2011, the annualized return on stocks in the following two-year period is 20% – more than double the market’s long-term return of 9.9% annualized. Moreover, the market achieves annual gains of 10% or more about 70% of the time.

Siegel…thinks the current market P/E multiple on both trailing one-year and projected 2013 earnings positions US stocks as attractive not only on an absolute basis but also relative to fixed-income alternatives. Of course, experience tells us that prospective earnings are often a moving target and, of late, estimates have been moving south.

Asness’ work confirms that the Shiller P/E is not infallible – no valuation measure is – but it also makes clear that to ignore it when it is at extreme levels is usually a mistake.

The market is currently slightly over-valued now which is reasonable since stocks offer a much more attractive return than bonds due to low interest rates. Eventually, however, interest rates will get to levels of at least 4% (which is the minimum normal rate on interest rates) and that would justify a P/E closer to 15. I am no prophet but if I had to guess, I would think future returns will be somewhere between Bogle’s and Shiller’s estimates, i.e. between 8% and 10%.

The Cyclically Adjusted Price Earnings Ratio, abbreviated as CAPE, or the more precise P/E10, closely tracks the real (inflation-adjusted) price of the S&P Composite. After dropping to 13.3 in March 2009, the P/E10 has rebounded to 23.0. The historical average is 16.39 raising concerns about the current price level of the S&P Composite. Let me explain. Words: 1298

More Current Articles on the Future of the Markets:

1. IF These “Head & Shoulders” Patterns Are Correct Then Stock Markets Can Expect a 40% Haircut! Here’s Why

The NYSE Composite and Wilshire 5000 index COULD BE forming one of the largest “Bearish Head & Shoulders” patterns in the past 100 years and IF they, in fact, are then we are about to see a 40% decline in those indices and the S&P 500 would most certainly follow suit. Take a look at the charts that tell the story. Words: 200

2. A Stock Market Rally Is Coming By Year-end: Here Are 10 Reasons Why

In the financial world, the month of October is synonymous with stock market crashes.  So will a massive stock market crash happen this year?  You  never know. Hopefully we’ll get  through October (and the rest of this year) but, without a doubt, one is coming at some point. The truth of the matter is that our financial system is even more vulnerable than  it was back in 2008 and, as such, many financial experts are warning that the next crash is rapidly  approaching and that those on  the wrong end of the coming crash are going to be absolutely wiped out. Let’s take a look at some of  the financial experts that are predicting really bad things for our financial  markets in the months ahead. Words: 1634

6. Goldman Sachs: The Fiscal Cliff Is a Real & Present Danger to Future Level of S&P 500 – Here’s Why

BMO chief investment strategist Brian Belski went on Bloomberg TV yesterday and made a huge call: he told viewers that “we’re on the verge of the next great bull market” in stocks ( see video here) outlining his bullish thesis based on 16 economic and market indicators he factored into his call which can be seen here.

A new position paper by Seth J. Masters, chief investment officer of Bernstein Global Wealth Management, entitled “The Case for the 20,000 Dow” is startling. Masters maintains that the odds Dow will rise by more than 7,000 points  – an increase of more than 50% – by the end of this decade are excellent. [Below is his argument for such a lofty expectation.] Words: 715

Share
Previous U.S. Housing Market Has All the Makings of a Turnaround – Look for Yourself
Next Obamacare is Coming: Here Are Some of the NEW Taxes You’ll Be Paying for It (+2K Views)