Risk of Owning Gold Skewed to the Downside! Here's Why

Lorimer Wilson August 1, 2011 Comments Off on Risk of Owning Gold Skewed to the Downside! Here's Why 2,252 Views

The peak nominal price of gold ($850/ozt.) occurred on January 21, 1980, which would correspond to about $2,450 in today’s dollars according to my calculations using the CPI. If history repeats itself [exactly, then] gold will gain another 35% or so, briefly, before becoming one of the worst investments in the world for the next decade or two. [Let me explain.] Words: 558

So says Scott Grannis, the Calafia Beach Pundit (www.scottgrannis.blogspot.com) in edited excerpts from an article* which Lorimer Wilson, editor of www.munKNEE.com (It’s all about Money!), has further edited ([  ]), abridged (…) and reformatted below  for the sake of clarity and brevity to ensure a fast and easy read. Please note that this paragraph must be included in any article re-posting to avoid copyright infringement. Grannis goes on to say:

Gold is riding the crest of a perfect storm these days. Geopolitical turmoil is all around us, with even the staid streets of the U.K. beset by mindless violence. Several of Europe’s most venerable countries are teetering on the brink of default. Almost every major central bank in the world is trying hard to get inflation to move higher. In inflation-adjusted and trade-weighted terms, the dollar is at an all-time low against a large basket of currencies. The Fed has just announced that it will keep short-term rates unusually low for at least the next two years, thus inviting rampant speculation and leveraging. Gold is the traditional safe haven for political and monetary risk, and there is plenty of both to go around. 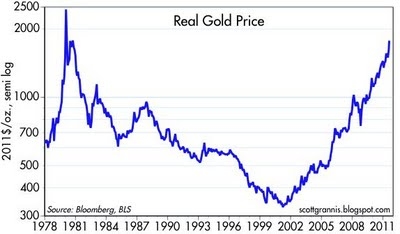 Conditions Currently Favorable for Gold But…

Indeed, it’s hard to imagine conditions being more favorable for gold except for [for the fact] that it is becoming quite expensive relative to other goods and services. It has only rarely been more expensive to buy gold. Some say it could go to $2,500 or even $5,000 per troy ounce, [Editor’s Note: See my article here which identifies 133 analysts who are on record as saying that gold is going to reach at least $2,500/ozt. of which 90 believe it will reach at least $5,000/ozt.] but no one really knows.

As a value investor, I look at the potential upside (35%) versus the potential downside (-80%?) and I shy away. The risks are very disproportionately skewed to the downside.

A Collapse in the Price of Gold is Coming

What could trigger a gold collapse, and could it happen soon? I doubt that any gold-killing development is going to surprise us soon, but it, inevitably, will happen…

[Any] news that inflation is making an obvious comeback would be enough to get central banks to reverse course and raising interest rates [which would cause gold to fall dramatically in price].

Share
Previous Don't Fight the Fed: Buy Some of These 20 Blue Chip Stocks Instead!
Next Should I Have Sold in May and Gone Away?