mark, even in the face of a shrinking GDP print, a lot of investors and commentators have been anxious. Some are proclaiming a rocket ride to the moon as bond money now rotates into stocks….[while] others are ringing the warning bell that this may be the beginning of the end, and a correction is likely coming. I find it a bit surprising, however, that no one is talking of the single largest driver for stocks in the past 4 years – massive monetary base expansion by the Fed. (This article does just that and concludes that the S&P 500 could well see a year end number of 1872 (+25%) and, realistically, another 28% increase in 2014 to 2387 which would represent a 60% increase from today’s level.) Words: 600; Charts: 3

So writes the Macro Investor in edited excerpts from his most recent post* on Seeking Alpha entitled S&P To 1872 From Quantitative Easing.

This article is presented compliments of  www.munKNEE.com (Your Key to Making Money!) and may have been edited ([ ]), abridged (…) and/or reformatted (some sub-titles and bold/italics emphases) for the sake of clarity and brevity to ensure a fast and easy read. Please note that this paragraph must be included in any article re-posting to avoid copyright infringement.

Comparison of S&P 500 Increase vs. U.S. Monetary Base Expansion

[As mentioned in the opening paragraph,] I find it a bit surprising that no one is talking of the single largest driver for stocks in the past 4 years – massive monetary base expansion by the Fed [see chart below]. 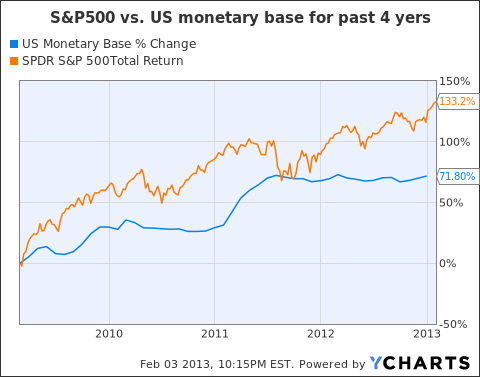 To estimate [the affect of the] monetary base expansion on the S&P 500, I did a simple calculation. Projecting the monetary base in the future is tricky, so I took the Federal Reserve Balance Sheet as a proxy. I plotted the S&P 500 against the Fed’s Balance Sheet on a weekly basis since the market bottom on March 2009 [see chart below]. 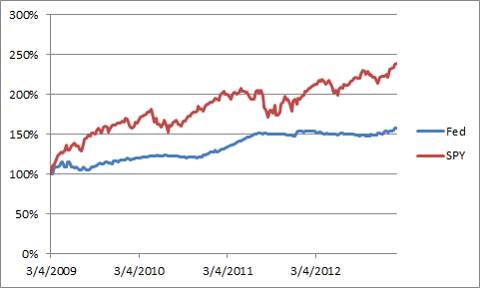 Effects of QE on Past S&P 500 Performance 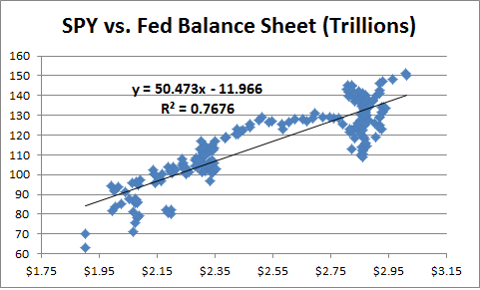 We know that the Fed will be expanding its balance sheet by at least $85 billion each month from QE, which means the ending balance will be ~$4T. Substituting in the equation, this means:

How to Maximize Profits

This market, fueled by massive amounts of liquidity being pumped by the Fed, has legs.

1. 5 Reasons To Be Positive On Equities

It seems clear that there are a number of investors who have gained confidence in the global economy and are seeking to capture the growth opportunities taking place around the world. With the European crisis comfortably in the rear view mirror and global central banks taking the position that they will continue their easing policies, investors have taken their foot off the brake and have begun to accelerate….We see more sunshine and less stormy weather ahead [and explain why that is the case in this article]. Words: 695; Charts: 3

3. Start Investing In Equities – Your Future Self May Thank You. Here’s Why

4. What Recovery? Contradictions Between Reality & Political Claims Are Everywhere!

6. Will We See Real Economic Growth or a Real Decline in World Stock Markets? That is the Trillion Dollar Question

Without economic growth, and real economic growth at that, there can be no meaningful long-term economic recovery in the developed countries.  Growth or lack thereof will have to be reflected in the financial markets over time.  Currently, I continue to see a disconnect between where the financial markets are pricing things, and where I think they ought to be pricing things. Words: 784

7. This False Stock Market Bubble Will Burst, Major Banks Will Fail & the Financial System Will Implode! Here’s Why