France, Italy, and Spain. Let’s take a look at a few countries.

So says Mike “Mish” Shedlock (http://globaleconomicanalysis.blogspot.com) in his original article* going on to say: 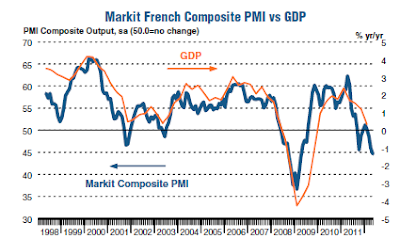 French service providers registered another sharp decrease in business activity during May. Underlying the weak performance was a second successive fall in incoming new business, while backlogs of work fell further. Companies responded by cutting employment. Input price inflation eased to the slowest for over two years, allowing companies to reduce their charges further.

2. Italy: Services Activity Continues Contraction at Sharp Rate in May 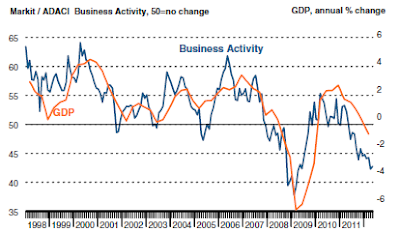 The health of the Italian service sector deteriorated during May, with steep falls in both output and new business recorded. Confidence with regards to activity in the forthcoming year dipped further, though employment levels fell at a slower rate. Cost inflation meanwhile eased to the weakest in six months, but still contrasted with a sustained drop in output prices.

3. Spain: Activity and new business both decline at faster rates 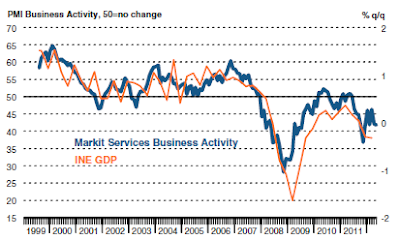 The Spanish service sector fell further into contractionary territory during May as the economic crisis showed no signs of easing. Rates of decline in activity, new orders and employment all accelerated during the month. Meanwhile, input prices rose only slightly as companies attempted to reduce costs, and output prices were cut sharply again in response to strong competition and weak demand. 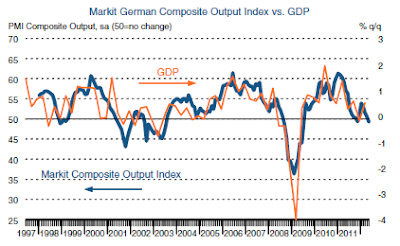 May data pointed to a renewed slowdown in German service sector growth, as falling levels of incoming new work continued to weigh on business activity levels. At 51.8, down from 52.2 in April, the final seasonally adjusted Germany Services Business Activity Index pointed to the slowest pace of expansion since November 2011. Higher levels of output have now been recorded for eight months running, but the pace of expansion in May was below the average seen since the survey began 15 years ago (53.0). 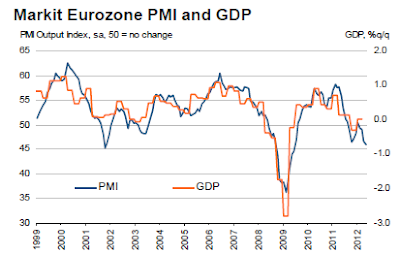 At 46.0 in May, down from 46.7 in April, the Markit Eurozone PMI® Composite Output Index signalled the steepest rate of decline in manufacturing and services output in the single currency area since June 2009. The headline index came in slightly above its flash estimate of 45.9, but remained below the neutral 50.0 mark for the fourth month running.

Chris Williamson, Chief Economist at Markit said: “The final Eurozone PMI edged up on the flash reading in May, but nevertheless indicates that the economy is contracting at the fastest pace for around three years. Companies report business activity to have been hit by heightened political and economic uncertainty, which has exacerbated already weak demand both in the euro area and further afield. Based on these numbers, it would not be surprising to see GDP for the region contract by 0.5% in the second quarter, though an even steeper decline could be seen if the June data disappoint.”

If the ECB is looking for an excuse to cut rates, it sure has one.

2. European Union Will Collapse Before the End of 2012: This is NOT Doom & Gloom – This IS Reality!

[The European Union] will collapse before the end of the year and very likely before the end of the summer. When this crisis hits it will be worse than 2008 and the world Central Banks will not be able to control the damage. What makes this time different are several items: [Let me explain]. Words: 1400

3. The Euro System is Doomed and the End Will Look Like This

In every economic crisis there comes a moment of clarity. In Europe soon, millions of people will wake up to realize that the euro-as-we-know-it is gone. Economic chaos awaits them. [Let us explain why that is the case and how it will come about.] Words: 680

5. Why & How the Euro Came About and What the Future Holds

Introduction: “The crisis in the eurozone is the result of France’s persistent pursuit of the “European project,” the goal of political unification that began after World War II [with the hope] that a political union, a United States of Europe similar to America’s, would…prevent the types of conflict that had caused three major European wars…[and] also make Europe a power comparable to the United States, and thereby give France, with its sophisticated foreign service, an important role in European and world affairs.” [What went wrong and what does the future hold?]

Worries about an economic catastrophe in Europe are heating up again, and dramatic forecasts about doom are popping up everywhere. What’s important? How did we get here? Let’s put this all in perspective. Words: 2356

7. Nigel Farage: The Only Way to Avoid a Depression Is a Break Up of the European Union

We still don’t have many political voices [in the European Union] that have the courage to say, ‘We’re headed for the rocks, and before we hit the rocks, let’s take a different course. Let’s try to break this thing up peaceably, before it ends in disaster….The establishment always supports the status quo…but actually, I think the only way we can avoid a depression is to break this (the EU) up.

8. Graham Summers: Collapse of Europe is Guaranteed! Here’s Why

9. Kunstler: Wake up, Sleepyheads! Things are Heating Up

Europe may soon be choking on that plat du jour of government a la Hollandaise with the side of chopped Greek salad. The whole world, in fact, has got something like a giant hairball stuck in its craw. The hairball is composed of filaments of lies wound over a core of supernatural indebtedness. The lies are promises that the debt will be paid back. Words: 710

10. Germany Could Initiate the Collapse of the European Union Within Months – Here’s Why

As many of you know, my primary forecast regarding Europe is that the EU will be broken up and/or collapse within the coming months. The reasons for this are financial, monetary and political in nature [with much of the latter dependent on what happens in Germany. Let me explain.] Words: 516

11. Europe is Heading Off a Financial Cliff! Here’s Why & How to Protect Your Portfolio

Europe is heading off a cliff! From one end of the continent to the other, the numbers suggest a double-dip recession is striking with brutal force…and with the world as interconnected as it is these days, what happens in Europe WILL impact our companies and markets here so now is the time to position your portfolio to weather the storm. Words: 900

12. This Picture of European Economic Reality is Worth 26,911 Words – Take a Look

Share
Previous European Union Will Collapse Before the End of 2012: This is NOT Doom & Gloom – This IS Reality!
Next Is Now the Time to Acquire Gold – Or Run Away From It?