Share
Can markets find the road back to positive territory? [There are] three reasons investors

should consider [before deciding whether to] remain in equities or…sit on the sidelines, [namely that:] investor sentiment is signaling the market is over-extended to the downside, stocks are trading well below historical valuation trends and the S&P 500 dividend yields are higher than the 10-year Treasury yield. [Let’s take a look at each of the three to help you come to a decision.] Words: 960
So say  Frank Holmes and  John Derrick (www.usfunds.com)  in an article* which Lorimer Wilson, editor of www.munKNEE.com (Your Key to Making Money!), has further edited ([ ]), abridged (…) and reformatted below for the sake of clarity and brevity to ensure a fast and easy read. The author’s views and conclusions are unaltered and no personal comments have been included to maintain the integrity of the original article. Please note that this paragraph must be included in any article re-posting to avoid copyright infringement.
They go on to say, in part:

Citigroup’s Panic/Euphoria model, a proprietary combination of nine facets of investor beliefs and fund managers’ actions, has been in “panic” territory since mid-August. Historically, overly bullish territory (Euphoria) generally signals a market correction is on the way, while a recovery arrives when sentiment is overly pessimistic (Panic).

The current panic level “generates a near 90 percent chance of higher equity prices in six months and a 97 percent probability of teen-like gains in the next 12 months,” says Citigroup.

It’s worth pointing out that gauging investor sentiment isn’t an exact science. Markets reached a panic at the end of June and a rebound never came to fruition. However, Citigroup says it does send a “fairly clear contrarian message of opportunity.”

2) Equities Appear to Be Underpriced

One positive result of the selloff is that many equities now appear to be priced at attractive levels. When a stock trades at fair value, that means the equity is “fairly” priced based on a discounted cash flow (DCF) model. DCF uses future cash flow projections a company may earn and then discounts the projections based on the cost of capital. To put it plainly, the DCF is what the company is expected to earn subtracted by what it will cost to generate those earnings, plus the time value of money (TVM). TVM means that money is worth more today than in the future.

The chart below plots the fair value of the roughly 1,300 U.S.-listed stocks covered by Morningstar. A ratio of one means a company is equal to its fair value. Today’s ratio is 0.81 and is approaching the lows we saw during the worst of the financial crisis in 2008. The current ratio implies roughly 20 percent upside to current equity prices.

This doesn’t mean equity prices have bottomed, but even pessimistic investors can see that many companies are trading at deep discounts relative to their expected cash flows.

BCA Research looked at equity valuations from another angle. The firm analyzed the trailing price-to-earnings (P/E) ratio of the S&P 500 versus the current yield on a 10-year Treasury bill over the past 50 years. Historically, there is an inverse relationship between the two, BCA says, meaning that higher yields on a 10-year Treasury meant lower P/E ratios for equities. This makes sense, because when investors can receive a substantial return from a “safer” government note, there is less incentive to buy equities that may carry a greater amount of risk and vice versa. 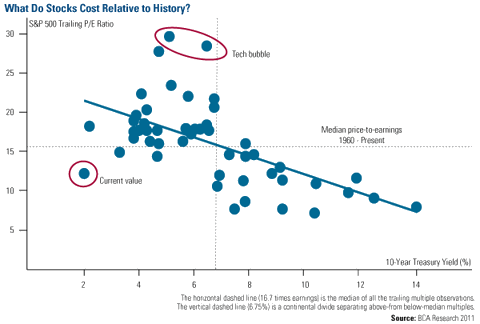 You can see from these plot points that today’s relationship between P/E multiples and yields is a “clear outlier” to historical trends. The other rare instance where values ventured so far from the trendline was during the Tech bubble (when equities were overvalued), but that is the exact opposite than what we have today.

“The multiple-rates analysis highlights that stocks are cheap. However, we do not rule out the possibility that they can get cheaper. Bottom line: If, consistent with our base-case expectation, the U.S. averts a recession, equities are inexpensive enough to provide investors with an attractive risk-reward profile.”

Another “buy signal” for stocks we’ve highlighted many times in the past… is that investors can receive a higher yield from stocks in the S&P 500 than from a 10-year Treasury. The current dividend yield for the S&P 500 is currently 0.67 percent higher than that of a 10-year Treasury, implying investors could receive a higher return with stocks just by receiving the dividend.

Only Fools Rush In

As Elvis sang so many years ago, “Wise men say, only fools rush in.” Now may not be the time for investors to be brave and overload themselves with unnecessary risk. The eurozone continues to struggle to find a way out of the debt mess created by Greece and others, and unemployment in the U.S. stubbornly remains above 9 percent, causing the economy to sputter. Both of these risks could torpedo an economic recovery before it leaves the harbor.

The King’s expression also applies to those investors hiding their cash under their mattresses. Investors must evaluate their individual financial situations to balance risk and uncertainty with opportunity, while keeping their focus on the long term. That’s no easy task but strategies such as dollar-cost averaging can at least get them back on the road again.

No one knows what tomorrow will bring, but varied indicators are signaling now is the time to be contrarian and take advantage of the opportunity the recent sell-off has given long-term investors.

Share
Previous What Does Current Global Crisis Comparison with Those of '08 and '10 Mean for Stocks, Bonds, Currencies and Commodities?
Next Before Buying a Gold-related ETF Check Out These Alternatives (+4K Views)