So says David Nichols (www.fractalgoldreport.com/) in paraphrased remarks from his original article*.

Nichols goes on to say, in part:

The last recession in 2008, with its accompanying financial crisis, caused a massive bout of deflation, which slaughtered gold and other financial assets, while triggering a major run up in the dollar so it’s critical to know if a similar bout of deflation is coming now. And gold is a highly sensitive barometer on this. If we pay careful attention, gold will give us the accurate forecast.

I want to take a minute to briefly discuss deflation and de-leveraging, because these are terms that are bandied about a lot, but perhaps not with optimal clarity, as there is a certain glaze-over factor with this type of economic jargon.

The main idea is that when a debt is written down — or “marked to market” — it tightens the money supply, which in turn causes deflation. For example, if your neighbor has an $800,000 mortgage, and because of declining real estate values he negotiates to have it lowered to $600,000, that is $200,000 wiped from the money supply. [As such,] if a recession triggers another round of debt write-downs – because people and companies don’t have the cash-flow to cover debt payments – it can cause a massive contraction in the money supply. This type of deflation makes the value of the dollar skyrocket, because suddenly there are fewer dollars floating around, and the scarcer something becomes, the more valuable it gets. This is what happened during the financial debacle in 2008.

It’s absolutely critical for gold bulls to realize that this type of de-leveraging, with the accompanying deflation, is just terrible for gold. Gold gets creamed in this macro-environment, along with just about everything else.

It’s also important to understand how this relates to the Fed, and its efforts to re-flate the economy. The reality is the beleaguered Fed can’t create new dollars quickly enough to keep up with the dollars being wiped out by bad debts. This is why the Fed can pump trillions of dollars into the economy and not cause hyper-inflation – [and why] it’s a big deal when the Fed tells us it’s going to keep fighting deflation into “late 2014.” That’s nearly 3 years from now. There are a lot of trillions between now and then.

Essentially, the Fed just [said] that they – along with every other politician and central banker out there, in…[North America], Europe and Asia – will continue to make the easiest, most expedient policy decisions that carry the least amount of potential “blowback” on their own careers and future earnings. The fix-it-as-best-you-can macro-environment will continue, as it always does.

[True,] there are “Black Swans” and “Derivative Risks” and a bunch of scenarios that could cause another bad crisis, but here’s the thing: the gold market is not sensing any black swans – and it always gives plenty of warning if it does.

This is a long-winded way of establishing that gold is free to soar right now. In fact, if this latest correction is over, then there is a juicy 17-month window of opportunity for gold to really, really soar…because the interim peaks in gold are spaced 21 months apart [as can be seen in the graph below]. 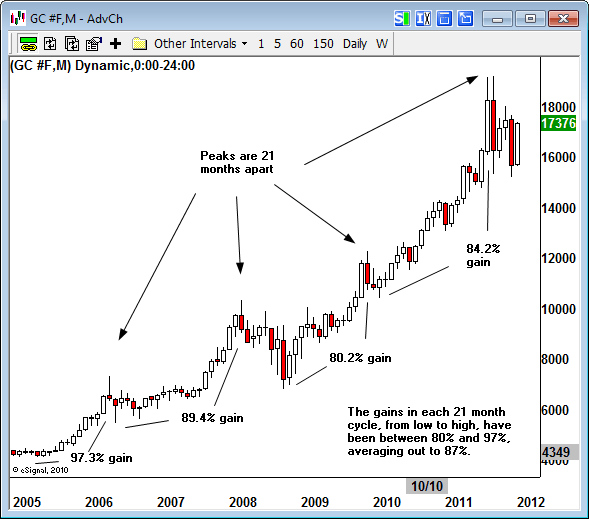 21 is a very important number for market timing cycles, in every time-frame. I won’t go into the details on why right here, but I do discuss the cycles in depth in my daily reports. It’s a simple thing to do the arithmetic on the size of each move up during these 21-month cycles, measuring from the corrective low to the Month 21 peak.

These 21-month cycles took gold up:

The low of this last correction came in at $1,524, so that is the starting point for the forward projection on the next 21-month peak.

If we go ahead and make the not-so-difficult assumption that gold is launching into another 21-month cycle to the upside — thank you Fed, thank you ECB — the target for this move is $2,750 to $3,000, with the next peak scheduled to arrive in June 2013, [early July at the latest]… (These projections…are subject to revision as real-time data comes in to confirm or refute. The key is to remain aware of the big road-map, but flexible if events don’t unfold as expected.)

Share
Previous The GOOD, the BAD, and the Downright UGLY Factors Affecting the USD!
Next American Grads: Here’s a Great Guide to Personal Finance