Negative Interest Rates Won’t Happen In the U.S. – Here’s Why

Investors have watched bond yields in Europe and Japan slide below zero into negative territory, and some have wondered: Could it happen here? Although you can never say never when it comes to markets, I believe the odds are slim, for reasons discussed below.

First, some background: As central banks around the world have struggled to revive inflation and support economic growth, short-term interest rates (“policy rates”) set by the Bank of Japan and the European Central Bank have been at or below zero for quite some time. However, the recent decline in intermediate and long-term bond yields to negative territory has been unprecedented. There are currently about $13.6 trillion in negative-yielding bonds around the world. #munKNEE/Money! 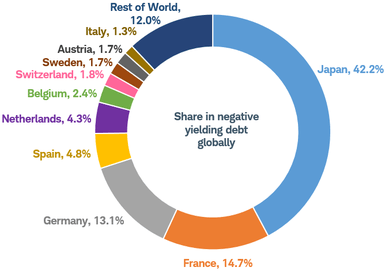 However, I believe negative yields are unlikely in the United States. Here are five reasons why:

1. It’s unclear whether the Federal Reserve can push yields into negative territory under the terms of its congressional charter

Former Fed Chair Janet Yellen made this point in 2016 and said that the Fed “would look into it.” To the best of my knowledge, the Fed hasn’t published anything on the topic in the interim, which means it isn’t under active consideration.

The purpose behind negative rates is to force money into the economy. If there is a penalty to holding money, then it is assumed the money will end up in the economy instead. Consumers will spend it, companies will invest it, and banks will lend it. Currently, those things are happening in the U.S. with positive interest rates.

Business investment is slowing, but not because of tight money. The primary cause of the slowdown appears to be uncertainty over trade policy rather than lack of credit availability. In fact, the capital markets are wide open for companies to raise money. Issuance in the corporate bond market has picked up sharply as interest rates have fallen, and even low-rated, junk companies are finding it easy to access capital.

3. The risk of recession is low

With financing conditions easy, the risk of recession has diminished. There are several models that attempt to rate the probability of recession.

Historically, it has been rare to enter a recession without tight credit conditions.

4. Deflation is not an imminent threat

Note: M2 is a measure of the money supply that includes cash, checking deposits, and easily convertible near money. M2 is a closely watched as an indicator of money supply and future inflation, and as a target of central bank monetary policy.

While the European Central Bank (ECB) and Bank of Japan (BOJ) have supported the view that negative rates have been successful in lifting economic growth and inflation, the results have been mixed at best.

In Europe, one of the drivers behind negative yields is tight fiscal policy, especially in Germany. With a budget surplus, Germany is actually paying down debt, reducing the supply of government bonds to the market. Meanwhile, the ECB is buying government bonds. Consequently, yields are plummeting – especially in Germany, where the continent’s largest economy is slipping into recession. It’s no surprise that departing ECB President Mario Draghi has pleaded for easier fiscal policy to augment monetary policy. The U.S. has a very different set of issues: a large and growing budget deficit, and an increasing supply of Treasuries.

A long way to zero

Negative bond yields can’t be entirely ruled out, but the bar to such a move is high. A steep and prolonged recession, with the prospect of deflation and tight credit conditions, would be pre-conditions in my view – but we haven’t seen that. In the meantime, the Federal Reserve has plenty of room to lower the federal funds rate, currently at 1.75% to 2%, before reaching zero or below.

We expect the Federal Reserve to lower interest rates to a range of 1.5% to 1.75% over the next few quarters, which should cause the yield curve to steepen to a more normal shape, in which longer-term rates are higher than short-term rates. Barring a recession, 10-year Treasury yields are likely to move back above 2%, although the upside is limited by the low levels of yields in other major markets.

We continue to suggest investors consider:

Editor’s Note: The above excerpts from the original article by Kathy A Jones, have been re-formatted, color highlighted, edited ([ ])* and abridged (…) by Lorimer Wilson, editor of munKNEE.com – Your KEY To Making Money! – for the sake of clarity, and brevity to provide a fast and easy read.

*(The author’s views and conclusions are unaltered and no personal comments have been included to maintain the integrity of the original article. Furthermore, the views, conclusions and any recommendations offered in this article are not to be construed as an endorsement of such by the editor.)