Gold is not a solution to investing problems. It is an insurance policy against an inflationary explosion. The higher the probabilities of inflation, the more gold I hold. [Let me explain.] “Monty Perelin” – www.economicnoise.com

Perelin goes on to say in edited excerpts from his original* article:

Regular readers know that I favor holding gold when inflation is a perceived threat. Gold is less an investment than a store of value, a means of retaining purchasing power. Gold is not an investment with which to make money. It is a means of protecting money you already have.

There is no certainty regarding an outbreak of inflation of hyperinflation. These are not economic events even though many consider them such. They are outcomes initiated by political action(s). Inflation and hyperinflation are everywhere and always political events.

It has been said that to believe in gold is to distrust politics and politicians. While I have always distrusted politicians, I have not always owned gold. Only because I believe inflation is likely do I use gold as a hedge against a loss in the purchasing power of cash. Nothing can destroy a nest egg or a society faster than high inflation. Hyperinflation is devastating.

Jeff Clark describes what hyperinflation was like in Weimar Germany and how gold performed:

The most famous case of hyperinflation is the one that occurred in Germany during the Weimar Republic, from January 1919 until November 1923. According to Investopedia, “the average price level increased by a factor of 20 billion, doubling every 28 hours.”

One would expect gold to fare well during such an extreme circumstance, and it did – in German marks, quite dramatically. In January 1919, one ounce of gold traded for 170 marks; by November 1923, that same ounce was worth 87 trillion marks. Take a look. 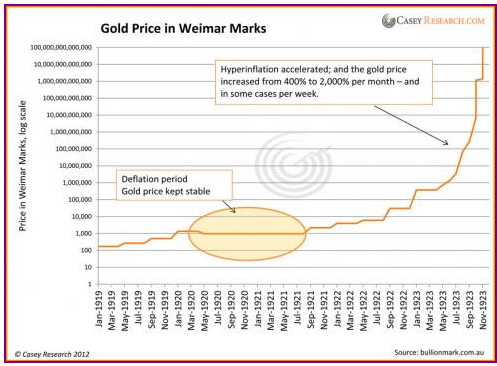 Inflation was at first benign, then began to grow rapidly, and quickly became a monster. What’s important to us as investors is that the price of gold grew faster than the rate of monetary inflation. The data here reveal that over this five-year period, the gold price increased 1.8 times more than the inflation rate.

The implication of this is sobering: while hyperinflation wiped out most people’s savings, turning wealthy citizens into poor ones literally overnight, those who had assets denominated in gold experienced no loss in purchasing power. In fact, their ability to purchase goods and services grew beyond the runaway prices they saw all around them.

The level of inflation experienced in Germany is incomprehensible to most Americans. Will it occur here? At this stage no one knows. There is nothing unique about the U.S., however, that makes it immune to what happened in Germany.

Whether…[hyperinflation] occurs here or not depends entirely upon what the politicians do. Based on their history and character, there is little reason to be optimistic.

*http://www.economicnoise.com (http://s.tt/1ffuq)  (To access the above article please copy the URL and paste it into your browser.)

1. The Scene is Set: The Euro – and Other Currencies – Will Collapse Resulting In a Hyperinflationary Depression

It’s incredible that the Mayans forecast 2012 would be the end of a major era. It looks, today, like we are standing on the eve of massive changes in the world that will have consequences for a long, long time to come. The scene is already set….the euro will collapse, and…other major currencies will collapse. The consequences of these (eventual) collapses will be horrible because we will have a hyperinflationary depression.

2. Embry: Global Financial Crisis II is Coming – and It Will Be Even Worse! Here’s Why

“Either you take the debt clean-out right away, and that means a very hard deflationary depression, or you do what I suspect they will try to do and that is keep pumping money into the system to keep the whole banking (system), derivatives and economies afloat [and] that will lead to some sort of monetary distress that could end in hyperinflation. I think that’s the worst outcome, but there is no good outcome.”

3. Major Price Inflation Is Coming – It’s Just a Matter of Time! Here’s Why

The U.S. economy is in an intensifying inflationary recession that eventually will evolve into a hyperinflationary great depression… [at which time] a $100 bill in the United States will become worth more as functional toilet paper/tissue than as currency. The U.S. government and Federal Reserve already have committed the system to this course through the easy politics of a bottomless pocketbook, the servicing of big-moneyed special interests, and gross mismanagement. The article is long but well worth the read. Words: 3565

6. A Hyperinflationary Great Depression Is Coming to America by 2014! Here’s Why

7. Williams: Expect Hyperinflation Within the Next 5 Years

Pushing the big problems into the future appears to have been the working strategy for both the Fed and recent Administrations, yet the U.S. dollar and the budget deficit do matter, and the future is at hand. The day of ultimate financial reckoning has arrived, and it is playing out. Words: 1096

In our estimation, the most likely time frame for a full-fledged outbreak of hyperinflation in America is between the years 2013 and 2015 [based on 12 warning signs that are on the horizon.] Americans who wait until 2013 to prepare, will most likely see the majority of their purchasing power wiped out. It is essential that all Americans begin preparing for hyperinflation immediately. Words: 2065

It is my view that the world has entered a new boom-bust cycle driven by oil prices. Oscillating oil prices – as opposed to credit cycles – will repeatedly stimulate and crash the highly levered global economy. Governments have not recognized this new cycle, and as part of a fruitless effort to retain control over deteriorating real growth and rising unemployment central banks will print more and more money, risking a hyperinflationary depression (stagflation at best). [As such,] the only respite for many investors is gold. [Let me explain.] Words: 925

12. How Likely Will Hyperinflation Occur in the U.S.?

13. 21 Countries Have Experienced Hyperinflation In Last 25 Years – Is the U.S. Next!

[Hyperinflation is not an unusual phenomenon. 32 countries have experienced hyperinflation over the last 100 years of which no less than 21 have experienced it in the past 25 years and 4 in the past 10 years. The United States is one of the few countries to have experienced two currency collapses during its history (1812-1814 and 1861-1865). Is it about to happen again?] Words: 1450
Share
Previous Graphite: The Driving Force Behind Green Technology
Next And the Winners & Losers in the Current Global Banking Crisis Are…