gold, but a second chance to get positioned for what should be a  very profitable intermediate degree rally over the next 2-3 months. [Let me explain further with a number of charts to support my position.] Words: 469

[While] I  think the market will easily make new highs in the next two or three  months, possibly even significant new highs… as QE3 starts to work its magic, I believe stocks and gold are  now due for a short-term breather…[due to] the daily dollar cycle.

[As of last] Friday the USD index was in the 24th day in the current daily cycle…[which] generally runs about 18-28 days trough to  trough. At 24 days the cycle is well into the timing band for a bottom  and bounce…[which] should force stocks into a short-term correction, or sideways consolidation, and gold into its next daily cycle low. 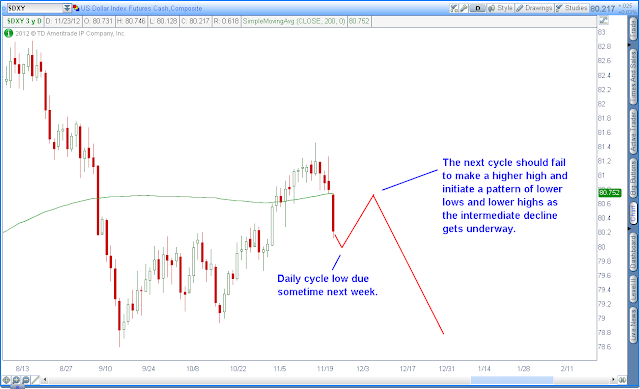 However don’t be fooled by any  short-term corrective move as stocks and gold have all clearly formed  major intermediate bottoms. There are always corrective moves along the  way, nothing goes straight up, but intermediate cycles don’t usually  form a final top until sometime around week 12-15. As last week was only week 2 of a new intermediate cycle, we probably don’t need to look for a final top until sometime in February, or early March. 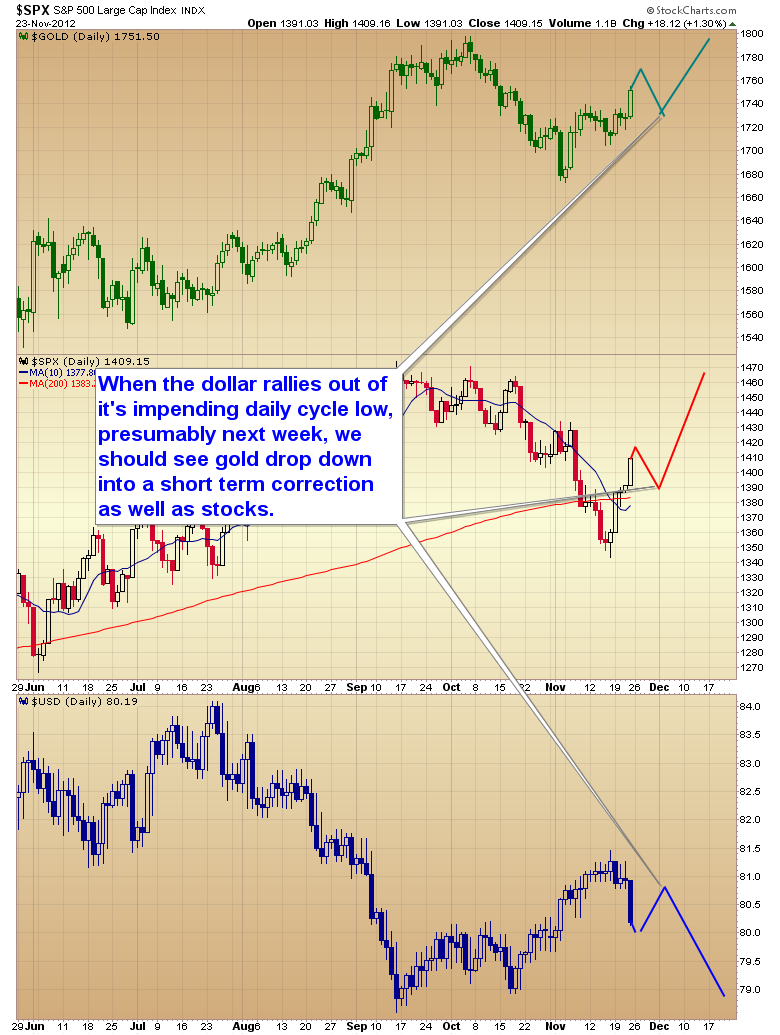 Coincidentally, that is when the  dollar is due to form its yearly cycle low. A yearly cycle bottom is the most severe cyclical decline other than a three year cycle low (the next one of those isn’t due until mid-2014). I think we can safely  assume that QE3 is going to complete the head and shoulders topping  pattern for this particular three year cycle. 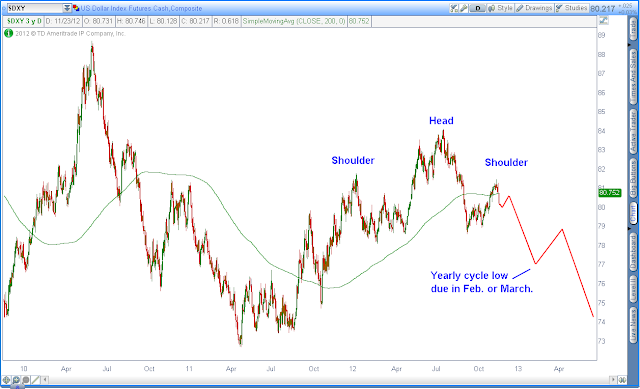 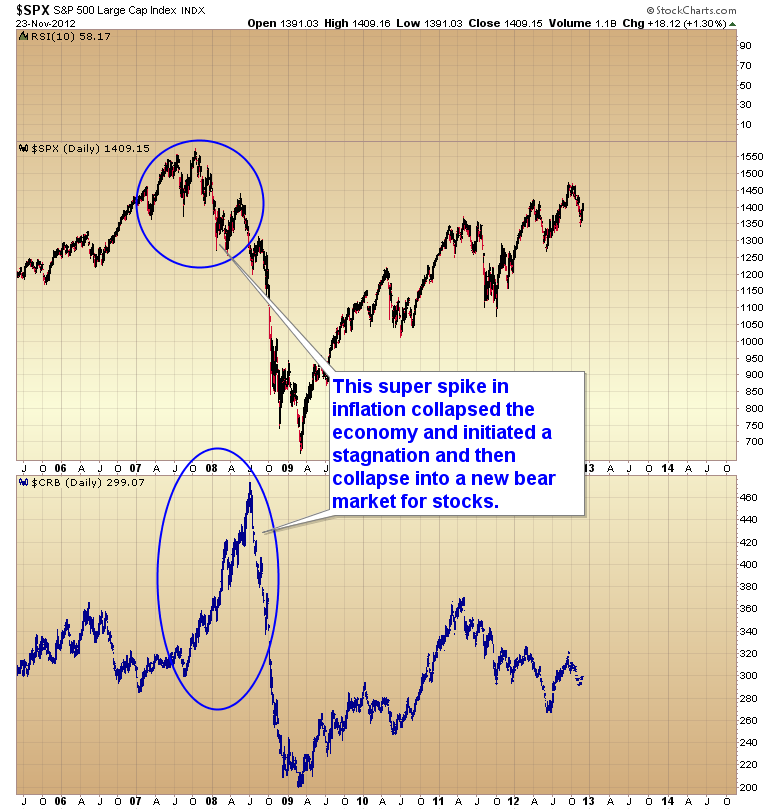 I think we will experience the same  phenomenon this time as QE3 eventually generates the same unexpected  consequences and spikes commodity inflation. 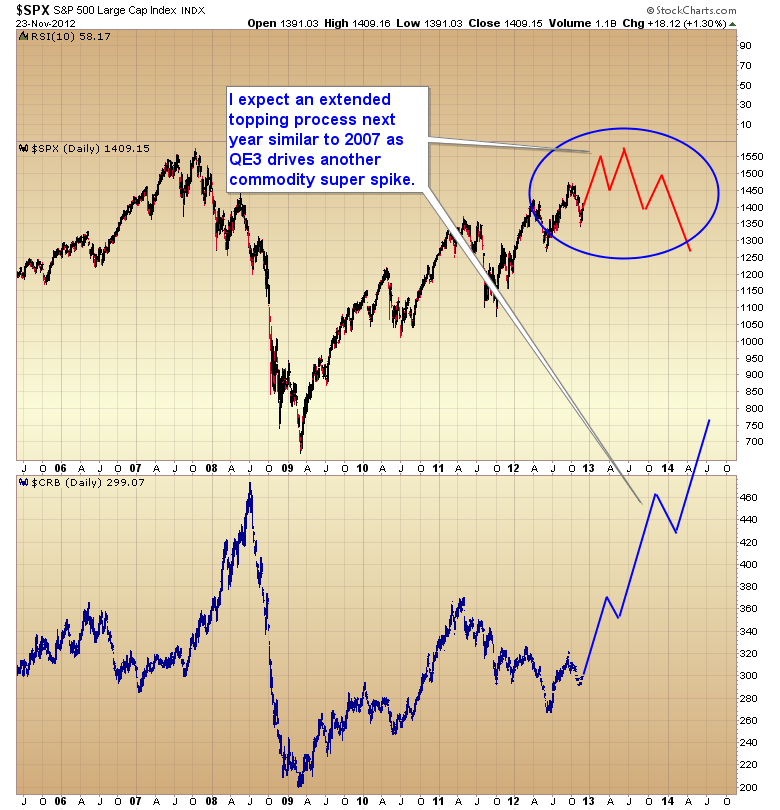 Understand that what is developing is not the beginning of  another leg down, but a second chance to get positioned for what should be a  very profitable intermediate degree rally over the next 2-3 months.

Our subscription service provides detailed technical analysis of where the price of gold, silver and precious metal stocks are going short term (in the next week or two), intermediate term (within the next 3-6 months) and long term (the ultimate top) in each stage of their respective bull runs. This service comes with detailed charting based on conventional technical analysis and our proprietary fractal analysis based on the ’70s. Below are some of our latest comments and rationale for expected price movements in gold without illustative charts which are only available to subscribers. Words: 1000

3. What, Me Worry? Not When You Look at These Monthly Gold & Silver Charts

We’ve been surprised at the recent action in the precious metals complex. During the recent correction the shares were showing quite a bit more strength than the metals. Then the shares took a dive below support yet the metals maintained their recent lows! How do we interpret this wild volatility in the relationship between the shares and the metals? Quite often we look at daily and weekly charts. Now is the time to take a look at the monthly charts which can help us get a better read on the larger trends at hand. Words: 636

With President Obama being re-elected we can expect four more years of a Washington-centric controlled economy with a rolling program of borrow, print, spend and pretend; similar to the last four years….[What affect will such fiscal irresponsibility have on the U.S. dollar, gold and silver? Read on!] Words: 717

Share
Previous Do You Have Enough (Any?) Gold or Silver to Meet Living Expenses During a Time of High Inflation? Here’s What You Need
Next Gold Belongs in EVERY Portfolio – Including Yours! Here’s Why (+2K Views)