Is This Pessimistic Outlook For the World Economy Likely to Unfold? (Almost 2K Views)

Lorimer Wilson February 21, 2012 Comments Off on Is This Pessimistic Outlook For the World Economy Likely to Unfold? (Almost 2K Views) 2,408 Views

The almost universal consensus, even among mainstream orthodox economists, is 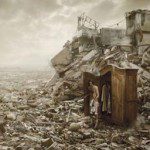 pessimistic regarding the world economy. Even though their predictions understate the scope and depth of the crises, there are powerful reasons to believe that we are heading toward a steeper decline than what was experienced during the Great Recession of 2008 – 2009…[Let me explain.] Words: 1656

So says James Petras (http://lahaine.org/petras) in edited excerpts from an article* which Lorimer Wilson, editor of www.munKNEE.com (Your Key to Making Money!), has further edited below for length and clarity – see Editor’s Note at the bottom of the page. (This paragraph must be included in any article re-posting to avoid copyright infringement.)

Petras goes on to say, in part:

Many of the major institutions and economic relations which were cause and consequence of world and regional capitalist expansion over the past three decades are in the process of disintegration and disarray. The previous economic engines of global expansion, the U.S. and the European Union, have exhausted their potentialities and are in open decline. The new centers of growth – China, India, Brazil and Russia – have run their course and are de-accelerating rapidly and will continue to do so throughout the year.

The Collapse of the European Union

Specifically, the crises wracked European Union will break up and the de facto multi-tiered structure will turn into a series of bilateral/multi-lateral trade and investment agreements.

The U.S.: The Recession Returns with a Vengeance

China will face the global recession of 2012 with several possibilities of ameliorating its impact.

The Transition 2011 – 2012: From Regional Stagnation and Recession to World Crises

The austerity programs imposed in Europe, from the UK to Latvia to southern Europe will really take hold [this year].

The Coming Wars that Ends America “As We Know It”

All indications point to this year being a turning point year of unrelenting economic crisis spreading outward from Europe and the U.S. to Asia and its dependencies in Africa and Latin America. The crisis will be truly global. Inter-imperial confrontations and colonial wars will undermine any efforts to ameliorate this crisis. In response, mass movements will emerge moving over time from protests and rebellions, to social revolutions and political power.

1. What Do Americans Fear Most for Their Economy?

There’s been a major swing in what people now fear the most for the U.S. economy. Take a look. Words: 255

The International Monetary Fund (IMF) painted a stark picture of the global economy this week slashing the outlook for world growth while forecasting a damaging recession in Europe that will leave no country, including Canada and the U.S., unscathed. The report stated that financial conditions have deteriorated, growth prospects have dimmed, and downside risks have escalated and, as such, policymakers must immediately move forward together to save the world economy from falling into a 1930s-style death spiral because the longer corrective action is put off the worse it will actually get. Words: 640

This analyst sees the perfect storm of converging criteria almost perfectly timed and aligned with the 2012 election cycle. When the moment arrives, the financial earthquake will rapidly demolish the existing highly precarious financial system. Government will stand by helpless, unable to shield itself, much less its vulnerable citizens or private financial institutions from the tsunami of debt and currency destruction. 2012 is shaping up to be the blockbuster main event of the ongoing financial crisis. Massive amounts of new debt, vast quantities of additional digital dollars and the spark of higher interest rates will set off version 2.0 of the credit-driven financial implosion. Let me explain. Words: 1443

6. Will This Hypothetical Outlook and Imagined Resolution of America’s Financial Crisis Occur in 2012? Let’s Hope Not!

7. Where Is This Unprecedented Global Financial Crisis Headed? A Retrospective from Alf Field

8. The U.S. is Headed Toward a Complete and Utter Collapse of its Financial System

13. Brace for Impact: U.S. About to Go Off a Financial Cliff!

The kind of impact [our economy is] going to have will not be like flying into the side of a mountain. It will be the kind of crash that skids over land, clipping trees and buildings until the plane ends up wingless in a smoldering heap. I just hope the fuel tanks don’t ignite when the long rough ride is over. [Let me explain.] Words: 832

14. Another Economic Collapse and Great Depression are Coming! Here’s Why

It really is hard to find the words to describe the true horror of the national debt of the U.S. The U.S. government has been on the greatest debt binge in all of human history, and a day of reckoning is coming that is going to be so painful that it is going to shock America to the core. We have lived so far above our means for so long that none of us really has any concept of what “normal” is like anymore. The United States has enjoyed the greatest party in the history of the world, but now this decades-old party is ending and the bills are coming due. Our current system is headed for an inevitable collapse. There is no way of getting around it – a horrific economic collapse is coming [and] it is going to change the world. You better get ready. [Let me explain further.] Words: 1771

Share
Previous NOW Is the Time to Get Out of the Stock Market! Here’s Why (+2K Views)
Next Monumental Change is Coming for Most Americans – Here's Why