Graham Summers: Spain Has Brought Europe to the Point of NO Return – Here's Why

Lorimer Wilson April 30, 2012 Comments Off on Graham Summers: Spain Has Brought Europe to the Point of NO Return – Here's Why 2,542 Views

that is the case] we need to understand Spain in the context of both the EU and the global financial system. [Once you read what I outline below you will more fully understand why] I believe that the EU, in its current form, is in its final chapters. Whether it’s through Spain imploding or Germany ultimately pulling out of the Euro, we’ve now reached the point of no return: the problems facing the EU (Spain and Italy) are too large to be bailed out! Words: 1345

So says Graham Summers (http://gainspainscapital.com/) in edited excerpts from his original article*.

Lorimer Wilson, editor of www.munKNEE.com (Your Key to Making Money!), has further edited the article below for length and clarity – see Editor’s Note at the bottom of the page. This paragraph must be included in any article re-posting to avoid copyright infringement.

The headline economic data points for Spain are the following:

Why is Situation So Bad in Spain?

On the surface, Spain’s debt load and deficits aren’t too bad. So we have to ask ourselves, “Why is unemployment so high and why are Spanish ten year bills approaching the dreaded 7%?” (the level at which Greece and Portugal began requesting bailouts). The answer to these questions lies within the dirty details of Spain’s economic “boom” of the 2000s as well as its banking system.

For starters, the Spanish economic boom was a housing bubble fueled by Spain lowering its interest rates in order to enter the EU, not organic economic growth. Moreover, Spain’s wasn’t just any old housing bubble; it was a mountain of a property bubble (blue line below) that made the U.S.’s (gray line below) look like a small hill in comparison. 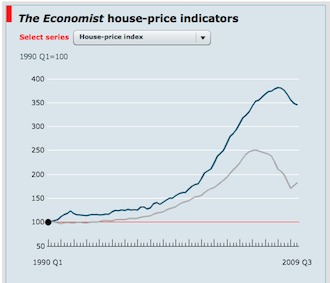 In the U.S. during the boom years, it was common to hear of people quitting their day jobs to go into real estate. In Spain the boom was so dramatic that students actually dropped out of school to work in the real estate sector (hence the sky high unemployment rates for Spanish youth).

Spanish students weren’t the only ones going into real estate. Between 2000 and 2008, the Spanish population grew from 40 million to 45 million (a whopping 12%) as immigrants flocked to the country to get in on the boom. In fact, from 1999 to 2007, the Spanish economy accounted for more than ONE THIRD of all employment growth in the EU. This is Spain, with a population of just 46 million, accounting for OVER ONE THIRD of the employment growth for a region of 490 million people.

This, in of itself, set Spain up for a housing bust/ banking Crisis worse than that which the U.S. faced/continues to face. Indeed, even the headline banking data points for Spain are staggeringly bad:

As bad as these numbers are, they greatly underestimate just how ugly Spain’s banking system is. The reason for this is due to the structure of the Spanish banking industry.

Automatic Delivery Available! If you enjoy this site and would like every article sent to you automatically then go HERE and sign up to receive FREE Your Daily Intelligence Report. We provide an easy “unsubscribe” feature should you decide to opt out at any time.

Until recently, the caja banking system was virtually unregulated. Yes, you read that correctly, until about 2010-2011 there were next no regulations for these banks (which account for 50% of all Spanish deposits). They didn’t have to reveal their loan to value ratios, the quality of collateral they took for making loans… or anything for that matter.

As one would expect, during the Spanish property boom, the cajas went nuts lending to property developers. They also found a second rapidly growing group of borrowers in the form of Spanish young adults who took advantage of new low interest rates to start buying property (prior to the housing boom, traditionally Spanish young adults lived with their parents until marriage).

In simple terms, from 2000 to 2007, the cajas were essentially an unregulated banking system that leant out money to anyone who wanted to build or buy property in Spain.

Things only got worse after the Spanish property bubble peaked in 2007. At a time when the larger Spanish banks such as Santander and BBVA read the writing on the wall and began slowing the pace of their mortgage lending, the cajas went “all in” on the housing market, offering loans to pretty much anyone with a pulse.

To give you an idea of how out of control things got in Spain, consider that in 1998, Spanish Mortgage Debt to GDP ratio was just 23% or so. By 2009 it had more than tripled to nearly 70% of GDP. By way of contrast, over the same time period, the U.S. Mortgage Debt to GDP ratio rose from 50% to 90%. Like I wrote before, Spain’s property bubble dwarfed the U.S.’s in relative terms.

The cajas went so crazy lending money post-2007 that by 2009 they owned 56% of all Spanish mortgages. Put another way, over HALF of the Spanish housing bubble was funded by an unregulated banking system that was lending to anyone with a pulse who could sign a contract.

Indeed, these banks became so garbage laden that a full 20% of their assets were comprised of loan payments being made by property developers. Mind, you, I’m not referring to the loans themselves (the mortgages); I’m referring to loan payments: the money developers were sending in to the banks.

This is the REAL problem with Spain’s banking system. It’s saturated with subprime and sub-subprime loans that were made during one of the biggest housing bubbles in the last 30 years.

Indeed, to give you an idea of how bad things are with the cajas, consider that in February 2011 the Spanish Government implemented legislation demanding all Spanish banks have equity equal to 8% of their “risk-weighted assets.” Those banks that failed to meet this requirement had to either merge with larger banks or face partial nationalization.

The deadline for meeting this capital request was September 2011. Between February 2011 and September 2011, the number of cajas has in Spain has dropped from 45 to 17.

Put another way, over 60% of cajas could not meet the capital requirements of having equity equal to just 8% of their risk-weighted assets. As a result, 28 toxic caja balance sheets have been merged with other (likely equally troubled) banks or have been shifted onto the public’s balance sheet via partial nationalization.

On that note, I fully believe the EU in its current form is in its final chapters. Whether it’s through Spain imploding or Germany ultimately pulling out of the Euro, we’ve now reached the point of no return: the problems facing the EU (Spain and Italy) are too large to be bailed out. There simply aren’t any funds or entities large enough to handle these issues.

* http://gainspainscapital.com/?p=1697 (To access the articles please copy the URL and paste it into your browser.)

On the surface, Spain’s debt woes have many things in common with those of Greece – bad age demographics and a toxic bank system – but you’ll note that, as we tackle each of these, Spain is in fact in far worse fiscal shape than Greece. [Let’s take a look.] Words: 700

2. Spain is an Absolute Disaster! Here’s Why

Spain is an absolute disaster on a level that [it seems] few, if any, analysts can even grasp. [Let me try to.] Words: 428

3. Graham Summers: Collapse of Europe is Guaranteed! Here’s Why

4. The Coming Crisis in Europe Will Result in a MAJOR CRISIS in the U.S.! Here’s Why

On the surface things may appear to be calm, but I don’t think the European crisis is anywhere near its conclusion. Losses still have to be taken from Ireland, Spain, Portugal and possibly even Italy…There are a number of ways out of Europe’s problems. One of them is higher inflation…[which] is going to be very positive for gold… because the central banks will be under pressure to print.

7. Where Is This Unprecedented Global Financial Crisis Headed? A Retrospective from Alf Field

Everyone must be wondering where this “unprecedented global financial crisis”, (the World Bank’s words), is heading. What follows, for what they are worth, are my cogitations on this crisis. Words: 1641
8.  This Picture of European Economic Reality is Worth 26,911 Words – Take a Look

9. IMF’s Attempt to Use Spain’s Financial Woes to Increase Its Powers a Momentous Move – Here’s Why

The International Monetary Fund wants the rules of the IMF changed so it can lend directly to banks and underwrite a rescue of the Spanish financial system without increasing Spain’s government debt. If the IMF is permitted to do so, however, the banking system’s control would pass to the IMF and such an increase in powers would be momentous. Here’s why. Words: 755