think a strong case can be made [to support my contention]  that the current bull market in gold is far stronger than the one from the 1970s. [I present below] the major observations I feel…support such a thesis. Words: 700

So says Simit Patel (www.informedtrades.com) in edited excerpts from his original article* which Lorimer Wilson, editor of www.munKNEE.com (Your Key to Making Money!), has edited below for length and clarity – see Editor’s Note at the bottom of the page. This paragraph must be included in any article re-posting to avoid copyright infringement.

Patel goes on to say, in part:

According to Dow Theory, secular bull markets have three phases:

As the chart below illustrates, a case can be made that gold is about to enter phase three — the mania phase.

The fundamentals supporting a mania in gold and gold stocks remain intact, as the world is still awash in debt. Considerable weakness remains in the European and U.S. bond markets likely as a result of bond investors losing faith as $7.6 trillion in sovereign debt is maturing this year.

Based on these factors, I thought it would be a good time to revisit the bull market in gold from the 1970s in order to see how history may repeat, as well as differences investors should be aware of. [Let’s take a look:]

1. More Debt Now Than Before. Gold is a function of debt; its economic purpose is to balance debt when nothing else can, when politicians refuse to restructure out of their own will, and when the monetary system does nothing but create more debt. The chart below tells the story of U.S. public debt; it is clearly much larger now than it was during gold’s bull market in the 1970s. 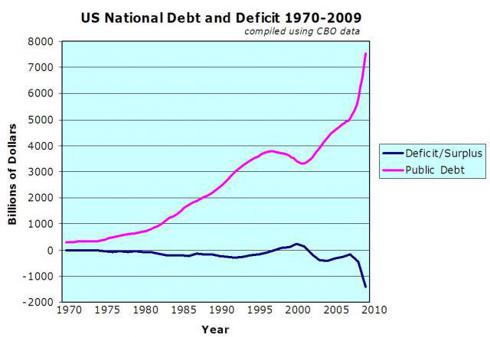 The above is, of course, just a snapshot of U.S. public debt; it does not include U.S. private debt, nor does it look at the situation around the world. As we are in a fiat monetary system in which all money is loaned into existence, the natural tendency of such a system is to create more and more debt. Gold’s bull market in the 1970s was just a warning sign of the inherent instability in the design of the monetary system. However, with debt levels where they are now, it is clear the warning has been ignored and the system is insolvent. Because the debt problem is so much greater now, I think the current bull market in gold will far outperform the one of the 1970s.

2. The Current Crisis Is Global. Unlike during gold’s bull run in the 1970s, the current crisis is global. Europe, Japan, Britain, and the U.S. are all mired in debt. In fact, a strong case could be made that the next big crisis could come from Japan, and could send an influx of capital into U.S. equity markets and gold. The infographic below, created by Glassman Wealth Services, tells the story. 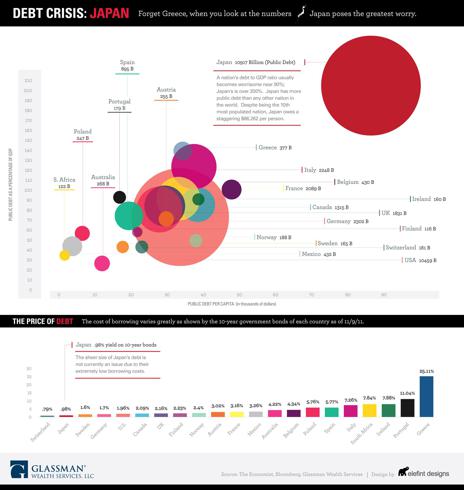 In the 1970s, the crisis was just about the U.S. [This time round] the current debt crisis is a global one [and] that means capital from all around the world will go rushing into gold. Therefore, the current bull market is going to be even more spectacular.

3. Bond Yields Are Currently Very Low. Perhaps the biggest difference between the current gold bull market and the one from the 1970s is that bond yields are currently very, very low. Contrast this with the 1970s, a time during which the yield on the 10-year Treasury bond consistently rose, as the chart below illustrates. 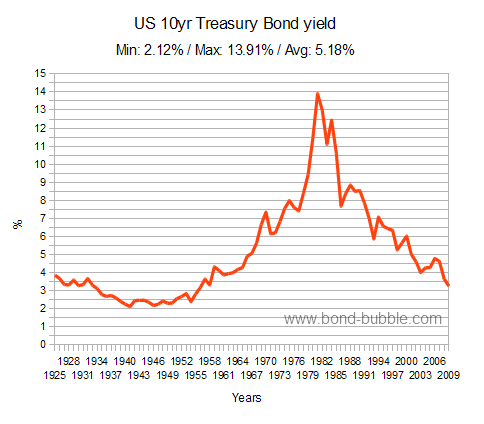 Low yields means that the bond market is increasingly incapable of competing with gold for capital. Given that these countries are still engaging in rampant deficit spending, raising rates would prove to be a dangerous strategy as it would increase the interest burden from governments, which would make them more insolvent and less capable of funding their programs. Low yields also make it more likely that capital-chasing income streams will find their way into high dividend stocks, and as the price of gold rises, many gold miners will be well-positioned to increase their dividends. Indeed, Newmont Mining (NEM) is the role model here, as the company has established a policy of pegging its dividend rate to the price of gold. As investors become increasingly disillusioned with bonds that have no real yield, gold stocks such as Newmont will be there to receive the capital.

For all of the above reasons, I think the bull market in gold will go much, much further than it did in the 1970s. In those days, gold ran from $35 to $850 — an increase of 24 times. If we identify the start of the current gold bull market as 2001 at a price of $250, a 24 times move would put the price of gold at $6,000. In light of how severe the debt problem currently is, a higher price is certainly feasible; the only question is when the parabolic move will truly start. Given the debt coupons that are due this year, and that much of the bullish sentiment in gold has subsided in the wake of the selloff after gold’s run up past $1,900 this past September, I think the stage is being set for the mania to start soon — perhaps by summertime.

There are two potential spoilers to my thesis here:

In light of all these factors, I think owning gold and gold stocks in anticipation of a parabolic mania is prudent. The challenge will be to preserve one’s discipline and poise if a mania does in fact emerge.

*http://seekingalpha.com/article/486851-why-the-current-bull-market-in-gold-is-bigger-than-the-one-in-the-1970s?source=email_macro_view&ifp=0  (To access the article please copy the URL and paste it into your browser.)

Nick Laird has put together an Elliott Wave theory prediction using ‘The Golden Mean’ & ‘Fibonacci Sequences’ to arrive at future prices for gold…which he is hopeful will serve as ‘a roadmap which gold may take as it climbs to new highs’. See the chart below. Words: 625

2. Richard Russell: NOW is the Time to Begin Amassing Your Future Fortune – Here’s Why and How

Great fortunes are made at super-bear market lows but you must have the money at the lows. [That is precisely] why gold is so singular and valuable. If you have gold at the bottom of the next bear market, you can exchange it for a collection of great common stocks or funds, and then sit back and relax.

Before we end the year we will hit new highs in both [gold and silver]. Then the mining stocks [will] react. The big problem has been [to date has been that] there is not this momentum in the prices of bullion, which is keeping people away from the gold stocks. If we can get the price of gold and silver going back up, I’m sure people will come back into the mining stocks.