Silver and gold remain near all-time lows relative to the stock market despite gold and silver going up and stock indexes going down in Q1 (January through March). As such, it might be wise to allocate a portion of your portfolio to silver and gold now because, at the current ratios, your risk appears to be very low.

This version of the original article by Jeff Clark from swpcayman.com has been edited [ ] and abridged (…) to provide you with a faster and easier read. Also note that this complete paragraph must be included in any re-posting to avoid copyright infringement.

[As you can see from the above chart] the current ratio is basically where it was in 2006 and, as such,] gold remains deeply undervalued relative to the stock market…

Here’s the ratio for silver. As you can see, despite its rise in Q1 and the decline in stocks, in the big picture it has barely budged and remains near all-time lows. 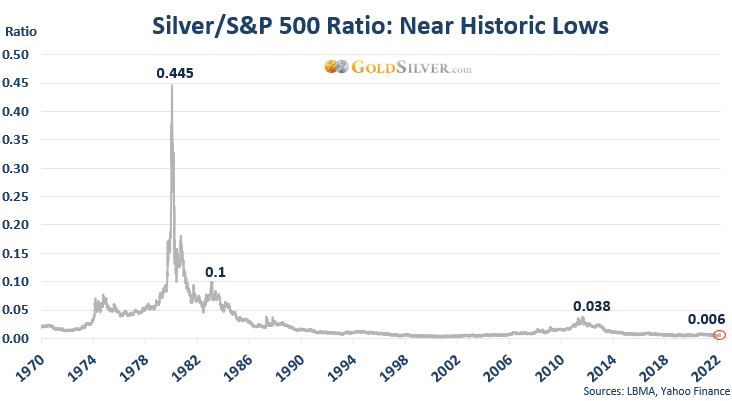 Only at the beginning of the new millennia has silver’s ratio to the S&P been lower than it is right now…and, since the ratio is sitting near historic lows, the reversal is likely to be breathtaking, even more than gold’s…

Given that bull markets don’t last forever, and that it takes longer to recover from crashes than what many investors think, it might be wise to allocate a portion of your portfolio to silver and gold now because, at the current ratios, your risk appears to be very low…