So writes David Hunkar (www.topforeignstocks.com) in edited excerpts from his original post* entitled On The Gold And Silver Price Super-Cycles.

This post is presented compliments of www.FinancialArticleSummariesToday.com (A site for sore eyes and inquisitive minds), www.munKNEE.com (Your Key to Making Money!) and the Intelligence Report newsletter (It’s free – sign up here) and may have been edited ([ ]), abridged (…) and/or reformatted (some sub-titles and bold/italics emphases) for the sake of clarity and brevity to ensure a fast and easy read. Please note that this paragraph must be included in any article re-posting to avoid copyright infringement.

Hunkar goes on to say in further edited excerpts:

The following chart shows real gold and silver prices from 1850 to 2012: 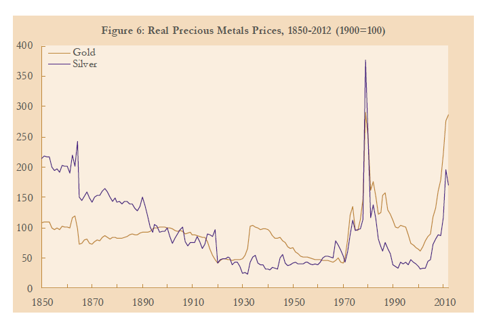 The tables below show the dates of super-cycles and dates of booms and busts: 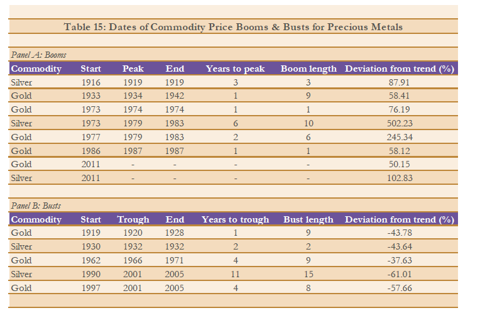 It is interesting to note the boom and bust lengths for these two precious metals. During the depression of the 1930s gold had one of the long boom periods. The recent long boom lasted 6 years from 1977 through 1983.

[How long will the current boom periods last for each of gold and silver? Time will tell but the above analyses should give you some idea of when.]

The breakdown after the QE4  announcement, and now the extreme move into a yearly cycle low has, I  daresay, convinced everyone that the gold bull is over. I would argue that it is impossible for the gold bull to be over as long as central  banks around the world continue to debase their currencies [and that] gold is just creating the conditions – a T-1 pattern – necessary for its next leg up to what I expect to be…around $3200 sometime in late 2014 or early 2015. [Let me explain.] Words: 560; Charts: 3

4. Past Bubble Movements Suggests a Parabolic Peak Price of $9,000 for Gold & $250 for Silver Is NOT Unreasonable – Take a Look

Bubbles tend to follow the 80/20 ratio indicated in the Pareto Principle where approximately 80% of the price move occurs in the LAST 20% of the time. That being the case it would appear that gold and silver could conceivably top out around $9,000 per troy ounce and $250/ozt respectively .This is not a prediction of future prices of gold and silver; it is an indication of what could happen in a speculative bubble environment based on the history of previous bubbles. Words: 1280; Charts: 1

When the price of gold is mentioned as costing “x dollars per troy ounce” do you fully appreciate the signifance of the term “troy”? When looking to buy gold jewellery do you fully understand what the difference is between an item that is 10 “karat” gold and another item stamped 18 “karat” gold (other than that it is much more expensive)? Let me explain. Words: 587

6. Keep the Faith – This Bull Market in Gold STILL Promises to Be One for the History Books! Here’s Why

Seeing the S&P 500 outperform gold and seeing gold stocks get decimated…has been enough to create suicidal sentiment…in the precious metals (PM) sector…but, as the many calls for an end of the PM bull market…[are expressed,] the risk in the PM sector gets lower and lower. The bigger picture hasn’t changed and isn’t going to for some time [so] keep the faith and hold onto your PM sector items tight. Don’t let the short and intermediate-term noise distract you from what STILL promises to be a secular bull market for the history books. The Dow to Gold ratio will hit 2 and might even go below 1 this cycle. [Let me explain.] Words: 873

There is a high probability that the correction in the gold price that started in early October at $1797 has been completed. Once $1800 is taken out on the upside the gold chart will look tremendous. A beautiful “cup and handle” base would then provide strong support for a vigorous upward climb in the precious metal. At this stage there is no reason to abandon the rough target of $4500 for this coming upward wave. [Below is my analysis and some charts on the situation.] Words: 434; Charts: 2

9. What Do the Similarities & Differences Between the 1980 Top in Gold & the Current Situation Mean for Its Future?

The fact that nobody really knows with absolute certainty where gold will really go from today onward makes people try to make their own guesses about what can happen with the yellow metal. One of the methods to do that is to look back into past situations and try to estimate if what is happening now is somehow similar to those past events. The situation in the gold market today is different than the one in 1980 in a few important areas. Even if past patterns don’t give you any certainty, though, sometimes they can limit the uncertainty. Let us analyze that in more detail. Words: 1260; Charts: 2

14. Goldrunner: What We ‘Know’ & ‘Don’t Know’ About Where Gold, Silver and PM Stocks Are Going

One never knows exactly where Precious Metals are going so I always try to keep in mind a list of items that are probable based on the facts that are evident.  I call this “what we know” and “what we don’t know”  so let’s take a look what we “know” and “don’t know” at this point in time. Words: 872

The price of gold, on a quarterly basis, is 86% correlated – yes, 86%! – to total government debt going back to 1975… and a shocking 98% over the past 15 years! [As such,] it would seem like a no-brainer investment thesis to buy gold… as a proxy for the not-otherwise-investable thesis that US total government debt will increase in the future. [But there is more – and it is disappointment for gold bugs – read on!]

Share
Previous Dumpster Diving for Gold – An Infographic on “Urban Mining”
Next Sorry Bears – The Facts Show That the U.S. Recovery Is Legit – Here’s Why (+2K Views)