supported, but that later in 2017 the inflation conditions and the value of the dollar, might provide a foundation from which a new gold bull market rally could grow. We, therefore, expect gold to drop down to meet the curve and test the $1,000/ozt. level as the dollar climbs out of its trading range. [Below are some charts to support my point of view.]

The comments above and below are excerpts from an article by ANGTraders.com which may have been enhanced – edited ([ ]) and abridged (…) – by

to provide you with a faster & easier read.

Gold vs. the USD

For several decades now, gold and the dollar have been trading with a negative correlation; the gold price moving opposite to the dollar index (chart below). 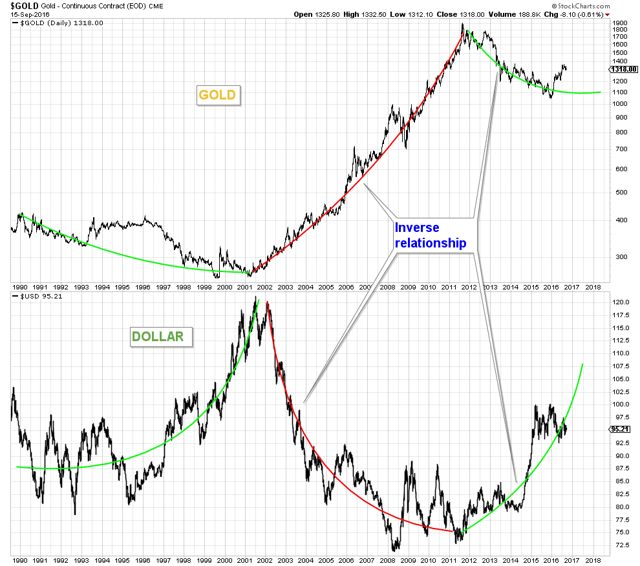 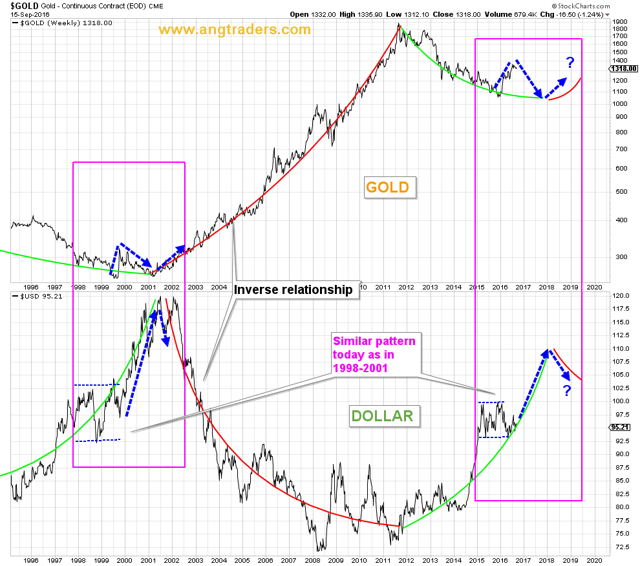 The next two charts show expanded views of both time periods. 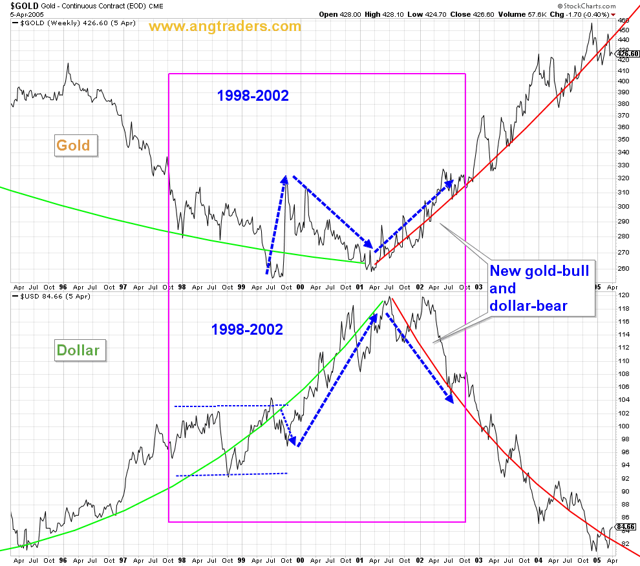 During 2000, the dollar rallied and gold dropped-down to meet the curve, after which it turned around and started a new bull market in 2001…

The chart below shows the consistent inverse relationship between gold and the 2-year Treasury rate. Chances are that the upward bias in rates will stay in place as long as the FED keeps chattering about raising rates. This creates a negative bias for gold.

Inflation is a fundamental reason for gold to rise (the chart below shows the strong positive correlation between the two)…[but it] does not look like it is going to run out of control before the end of the year. It is not even at the 2% level that the FED is looking for, and if it does start to rise, the FED is just itching for the excuse to raise rates which would, again, hurt gold.

For the rest of the year, whether inflation rises or not, gold is going to be constrained. After the election and further into 2017, however, the conditions for a gold rally may develop; if inflation starts to take hold and if rate increases are unable to contain it, the dollar will weaken and gold will start a new bull market.

Despite the high probability we see for weaker gold prices, the markets in general, both gold and equities, are in a highly unpredictable state so we continue to hedge our short gold positions with options and suggest that traders buy insurance whether going long or short.