Lorimer Wilson November 18, 2011 Comments Off on Market Fear and Uncertainty Is Inhibiting Economic Growth – These 8 Charts Show How 2,143 Views

The market believes that there is more profit to be made in speculation than in new business investment – and speculation is what you get when you weaken the incentives to invest in productive activities for the long haul. In fact, fear and uncertainty are inhibiting growth [- almost everywhere – as shown in graphic form in the 8 charts below]. Words: 1000

So says Scott Grannis (http://scottgrannis.blogspot.com) in edited excerpts from his original article*.

Lorimer Wilson, editor of www.munKNEE.com (Your Key to Making Money!) and www.FinancialArticleSummariesToday.com (A site for sore eyes and inquisitive minds) has further edited ([ ]), abridged (…) and reformatted (some sub-titles and bold/italics emphases) the article below for the sake of clarity and brevity to ensure a fast and easy read. The author’s views and conclusions are unaltered and no personal comments have been included to maintain the integrity of the original article. Please note that this paragraph must be included in any article re-posting to avoid copyright infringement.

All [of the above] are symptomatic of a market [see the 8 charts] that believes that there is more profit to be made in speculation than in new business investment. Speculation is what you get when you weaken the incentives to invest in productive activities for the long haul. [Below are 8 charts that show that to be the case in graphic form.]

October Industrial and Manufacturing Production came in stronger than expected, but the bigger picture is that industrial output is rising at a moderate 4% rate: nothing to get excited about, but nothing to worry about either. 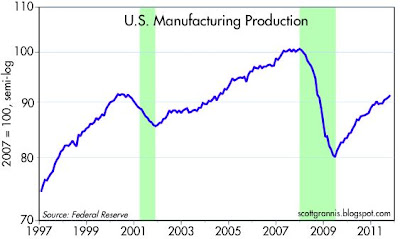 A survey of home builders’ sentiment ticked up—surprisingly—this month, and this adds some weight to the case that we have seen the worst in the housing market and may be on the cusp of some improvement. 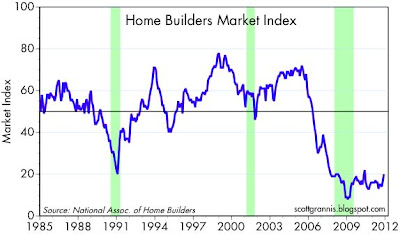 This next chart, showing an index of homebuilders’ stocks, also suggests we have seen the worse and are seeing some gradual improvement on the margin. Painfully slow, to be sure, but the trend appears to be heading up. 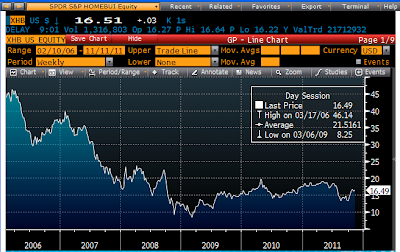 The home vacancy rate also suggests that we have seen the worst and things are improving, although of course there needs to be a whole lot of improvement before we can get back to “normal” conditions. 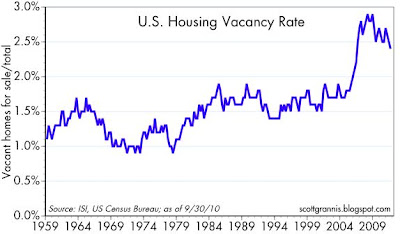 Even though we are still a long way from seeing what might be termed “strength” in the housing market, simply ruling out further weakness is nevertheless quite comforting. As excess housing inventories are worked off and the economy continues to grow and as household formations continue to exceed new construction starts, the case for a rebound in residential construction and a rebound in prices gets stronger.

October consumer price inflation showed some moderation. On a year-over-year basis, there is nothing alarming going on here. However, declining energy prices have played a big role in moderating overall inflation in recent months, and that is almost surely going to reverse in coming months, since crude oil has now broken above $100/bbl. (up almost 35% from the early October low). 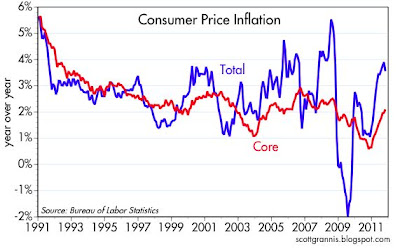 The following chart compares the yields on 30-yr Treasuries to core inflation. In an ideal world, bond yields would be at least 2 percentage points higher than inflation, and this chart is set up to show that [that] is the case when the two lines are on top of each other. 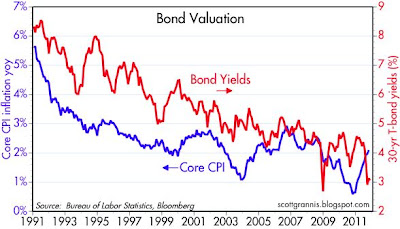 Reality rarely matches the ideal, of course, but the [above] chart is nevertheless helpful in gauging the valuation of bonds on a real return basis. On that score, in the past several decades, bonds have only been less unattractive at the end of 2008 (not to mention several times back in the rising-inflation 1970s) and considering that core inflation has been trending up while bond yields have declined to very low levels, the real-yield-valuation case for owning long Treasuries is very weak.

Long bonds are only attractive as an antidote to fear: fear of an implosion in European financial markets that will rock the global economy and deliver us into years of recession or even a global depression. You have to be extremely worried about the future to want to own long Treasuries these days.

The chart [below] compares the year over year growth rate of the consumer and producer price inflation. Both are trending higher, and the PPI seems to be leading the CPI in recent years, suggesting that the rise in the core CPI is likely to continue. 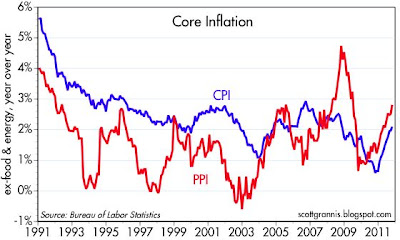 I [have added this next] chart to show some long-term perspective on core inflation. Note the extremely low levels of inflation in the early 1960s, when monetary policy was constrained by the gold standard, the dollar was the king of the hill, and the economy enjoyed very strong growth. Note also how this measure of inflation has crept higher since 2002-3, which was when the Fed first started to ease aggressively and the dollar began to decline. 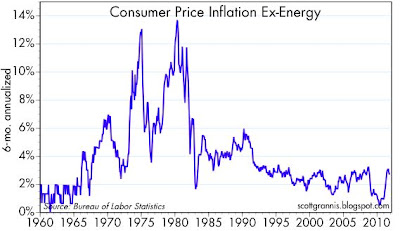 I don’t think it’s a coincidence that growth has been very disappointing in the past four years. With a weak dollar and very low real interest rates, speculative activity becomes more appealing than investing in the real economy. Business investment is rising, but it is lagging woefully behind the growth in corporate profits.

1. Wise Words of Advice for Today’s Economists from a Veteran Observer

[Below is] a list of my favorite 25 rules for analyzing the economy. There are probably many more than this and many that have yet to be discovered, but this list has served me well over the past quarter century and hopefully will be of use to others. Words: 1849

50 economists forecast their estimates for real GDP over the next 6 quarters in a recent Wall Street Journal survey [and their projections, on average, show a modest increase through to the end of 2012 as the table below shows. In addition, they were asked] to forecast… the probability of a recession in the U.S. in the next 12 months] and the results were quite surprising – quite. Let me show you.] Words: 600

3. What is the Primary Reason for Lack of Economic Growth in America? Here is the Answer

The widespread stagnation in wages, rather than the level of unemployment, may offer a better explanation for the failure of economic growth to accelerate two years after the end of the recession. Workers’ ability to negotiate higher earnings won’t return until the job market strengthens, and flagging confidence has raised the risk that consumers may retrench. [Let us explain.] Words: 1018

[A look below at the trend in the U.S.’s share] of world GDP (data here) from 1969 to 2010… [shows an] amazingly stable share of world output which has remained [constant at 26.3%] for more than forty years…[and] is a testament to how America’s dynamism, resiliency, and culture of innovation and entrepreneurship have enabled us to be productive in a tough world. [Let me expand on this further.] Words: 730
Share
Previous Do Recent Gold & Silver Correlation/Return Comparisons With S&P 500 Refute Their Safe Haven Status?
Next Market & Economic Cycles Suggest We’re in the Fall Season in More Ways than One – Here’s Why (+2K Views)