Europe Has Its PIGS, America Its CAIN and Un(Abel) – Both Will Be Good For Gold

Lorimer Wilson December 15, 2010 Comments Off on Europe Has Its PIGS, America Its CAIN and Un(Abel) – Both Will Be Good For Gold 2,204 Views

Polishing My Gold Strategy for 2011

In Europe, they were able to come up with a clever moniker, PIGS, to succinctly represent [and name the countries in dire financial straights – Portugal, Iceland, Ireland, Greece and Spain] the most boorish animals on the farm, and [I have taken it upon myself to call the U.S. state budget crises] the story of CAIN (California, Arizona, Alaska, Illinois, New York and New Jersey), the seven most rotten pillars of our union, and (Un)Abel, the country as a whole, which is (Un)Abel, i.e. unable, to do anything about the impending crises. Given the current political climate and implicit anti-bailout mandate of the new Congress, the Federal government might be powerless to do anything but accept painful state defaults. Before we know it, we could all be ancestors of evil… 2011 could be the year that CAIN starts to face some serious trouble, and may need some serious help to avoid killing his brother (Un)Abel!  Words: 1529

So say Scott Redler and John Darsie (blog.t3live.com) in an article* which Lorimer Wilson, editor of www.munKNEE.com, has reformatted and edited […] below for the sake of clarity and brevity to ensure a fast and easy read. Please note that this paragraph must be included in any article re-posting to avoid copyright infringement. Redler and Darsie go on to say:

Many people judge “bubbles” and over-hyped phenomena in the financial world based on when the retail public take notice en masse. Conventional wisdom now says that when the retail public starts hearing the story and jumping on the bandwagon, a top is imminent. With cash for gold ads polluting our television screens, gold vending machines popping up around the country, and gold stories starting to populate the covers of mainstream magazines, it certainly feels like the gold story fits the bill. It would be fallacious, however, to blindly judge something only on such a basic level without digging deeper… [and,] in this instance, I believe the facts supporting another surge higher in gold prices outweigh the doubts accompanying this analogy. [Frankly,] even without the worst case scenario [mentioned below] coming to fruition, gold seems destined to go higher as long as fear remains a part of the equation.

All indications are that the European sovereign debt crisis will get worse before it gets better. A massive bailout for Portugal seems almost inevitable at this point, and then we start getting into the real big kids on the block. A bailout for Spain, the ninth largest economy in the world, might require more money that the system could tolerate. If a domino of that size were to fall, who knows what could be next to follow?

The Equity Market Rally Could Be Fool’s Gold

Over the last couple months, as the market trudged ever higher, we were lulled into a sense of complacency. The market, once ruled by headline risk and overnight moves, had become more focused on earnings and valuation but that doesn’t mean things couldn’t return to what they used to be. The rosy complexion of the market was driven largely by expectations that the Fed would prop up asset prices at every turn, and it could be argued that prices are artificially inflated at current levels. The Fed has taken a “fake it until you make it” approach; continue to prop up asset prices until the economy picks up. If it doesn’t work, at what point are QE3, QE4 and QE5 no longer an option? Over the last week or so we have seen headlines reassert their power, with the Ireland debacle and the Korea skirmish serving as a stark reminder of what can happen. Tinkering with asset prices causes price instability, and investors will not be so quick to fall into the same old trap.

The Giant Elephant in the Room: Inflation

Many argue that we are currently in a strictly deflationary environment that needs to be fought at all costs, and that if real inflation does appear, the Fed has tools to fight it. Government officials still claim there is no inflation, but as food and gas prices skyrocket around the world, consumers are scratching their heads over such an assertion. We have also seen “shadow inflation”, which can be understood as value deflation. Instead, for example, of getting a 7-ounce bag of coffee beans at Wal-Mart, you can now only get 6-ounce bag that costs the same price, a fact that is not taken into account in the Consumer Price Index (CPI). While a gym is cutting costs or keeping fees stable, for example, they are getting rid of water fountains and turning off the air conditioning. In general, the average investor has grown skeptical of our already discredited leadership. 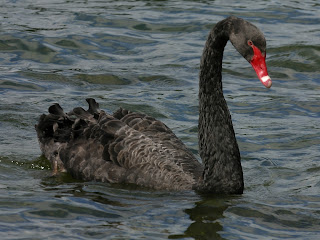 Nassim Taleb, a renowned expert on understanding black swans and left tail risk, describes the potential hyperinflation phenomenon as trying to get ketchup out of the bottle. Upon the first couple of smacks, little-to-nothing might come out. Smack the bottom of the bottle three or four more times, though, and the whole contents might end up on your plate. The Fed’s QE program is arguably the biggest science experiment of all-time, performed with taxpayer money, and the end result is unclear. Even Ben Bernanke admits that he does not know what the outcome will be given the complexity and ground-breaking nature of his Fed’s bold actions. For all we or they know, all this money printing and monetization of debt could be setting the stage for a period of high and difficult-to-fight inflation. It remains to be seen whether, at that stage, the Fed would have the credibility or the tools to combat runaway prices.

If all-out disaster can be averted in Europe, and the U.S. economy can continue to grow, gold can still see a slow technical grind to $1600-$1800. If Europe starts to falter even more (remember, debts come due over the next several years), which seems likely at this point, gold can really go parabolic to $2000+. We are heading toward an environment in which nobody feels comfortable holding any fiat currency. Gold, something that cannot be conjured out of thin air and has universally recognized value, would be seen as the primary store of value. Other precious metals like silver, which has outperformed gold handily this year, would likely behave in a similar fashion. The U.S. mint has seen a dramatic rise in demand for silver eagle coins, with sales up 30% since 2007.

The two most likely scenarios for the world economy both offer strong support for higher gold prices. Further deterioration in Europe and the U.S. would trigger an exodus from fiat currencies into gold, and a high-inflation recovery would send gold prices soaring. Gold is both a safe-haven play and an inflation hedge. The only scenario where gold could burst like a bubble is if, against all odds, the economy recovers, budget deficits self-correct as aggregate demand and tax revenues soar, the Fed is able step in to stem the tide of high inflation at just the right time and the world presses on into the 21st century like this little recession never happened. Sorry folks, but I just don’t see that happening.

The U.S. Could Face Serious Problems In 2011

If large state dominoes start to fall and creditors are forced to the table, it could lead to rehashing of the widespread fears from 2008. California, after all, is the fifth largest economy in the world, and would be a mighty large domino. The non-partisan Legislative Analyst’s Office projected on November 10th that the budget shortfall in California will be $25.4 billion, twice as large as state political leaders had predicted and more than a fifth of the general fund. A default by a sovereign state (and it’s biggest, at that) would affect the credit rating of the United States as a whole. A bailout, if it were approved, with deep cuts for pension holders and other programs would likely be met with angry demonstrations by Californians, much like we have seen in Greece, Ireland and across Europe. Civil unrest would do wonders for the price of gold. [Indeed,] this entire situation amounts to a Federalist crisis for the United States. These issues are not limited to California. [See this 60Minutes report on the subject.]

Conclusion: Gold Has A Compelling Long-term Story for Higher Prices

[As such,] if nothing else, investors should… protect a portion of their portfolio against the possibility of further deterioration of the world economy and high future inflation by owning gold and/or other precious metals.

Share
Previous Why Quantitative Easing WILL NOT Help the Economy – But WILL Help Gold and Other Commodities! (+2K Views)
Next Upcoming Market Decline Will Be Worse Than Last Time – Here's Why