Economic Contraction Has Caused Vehicle Traffic to Decline – Guess How Much?

Lorimer Wilson July 21, 2011 Comments Off on Economic Contraction Has Caused Vehicle Traffic to Decline – Guess How Much? 1,745 Views

The Depart of Transportation’s Federal Highway Commission has released the latest report on Traffic Volume Trends data through May. The lead observation is that travel on all roads and streets declined by -1.9% (-5.0 billion vehicle miles) for May 2011 as compared with May 2010. [Let’s take a look at some graphs to illustrate the trend going back to 1971.] Words: 370

So says Doug Short (www.advisorperspectives.com)  in edited excerpts from an article*  which Lorimer Wilson, editor of www.munKNEE.com

(It’s all about Money!), has further edited ([  ]), abridged (…) and reformatted below  for the sake of clarity and brevity to ensure a fast and easy read. Please note that this paragraph must be included in any article re-posting to avoid copyright infringement. Short goes on to say:

Here is a chart that illustrates this data series from its inception in 1970. 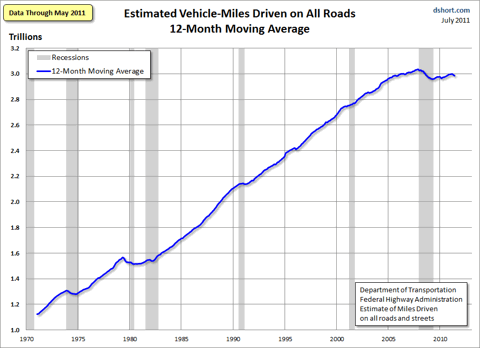 Total Miles Driven, however, is one of those metrics that must be adjusted for population growth to provide the most revealing analysis, especially if we’re trying to understand the historical context. We can do a quick per-capita adjustment of the data using an appropriate population group as the divisor. I use the Bureau of Labor Statistics’ Civilian Noninstitutional Population Age 16 and Over.

The next chart incorporates that adjustment with the growth shown on the vertical axis as the percent change from 1971. 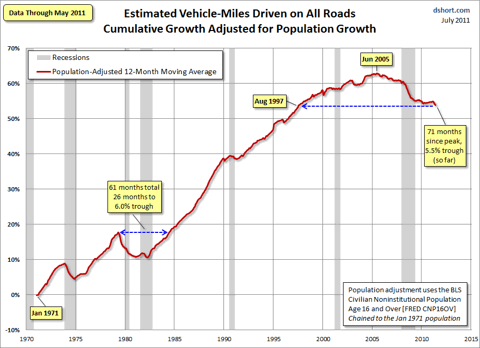 Clearly, when we adjust for population growth, the Miles-Driven metric takes on a darker look. The nominal 39-month dip that began in May 1979 grows to 61 months, slightly more than five years. The trough was a 6% decline from the previous peak.

The population-adjusted all-time high dates from June 2005 which is 71 months — nearly six years – and since the latest data is the lowest reading since the all-time high, the best we can hope for is that May “might” have been the trough.

Share
Previous (: This Mathematical Formula is the Key to Getting What You Want :)
Next Get Ready: More Taxes/Less Tax Breaks are Coming!