So say the authors of an article* posted at www.newlowobserver.com in edited excerpts from his original article* which Lorimer Wilson, editor of www.munKNEE.com

(It’s all about Money!), has further edited ([  ]), abridged (…) and reformatted below  for the sake of clarity and brevity to ensure a fast and easy read. Please note that this paragraph must be included in any article re-posting to avoid copyright infringement. The article goes on to say:

The last confirmation of the bull market that we received was on April 6, 2011 at which time we suggested that the market, as a leading indicator for the economy, would continue to rise “… at least for the next month and a half …” As far as the market is concerned, the top came in early May [and,] almost as a total shock to some, the announcement of the extension of the debt ceiling didn’t help the market in the least. In fact, one could have applied the adage “buy the rumor (of a deal), and sell the news.”

While we had looked for a breach of the June 2011 low to be a key indicator of the bearish trend, we were primarily focused on the March 2011 low to be the most revealing level. The charts below graphically make clear what may become the trend for the market over the next several months. 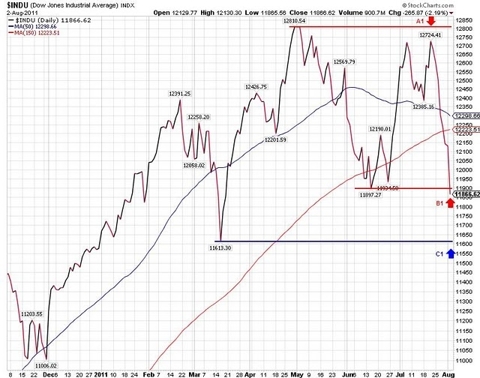 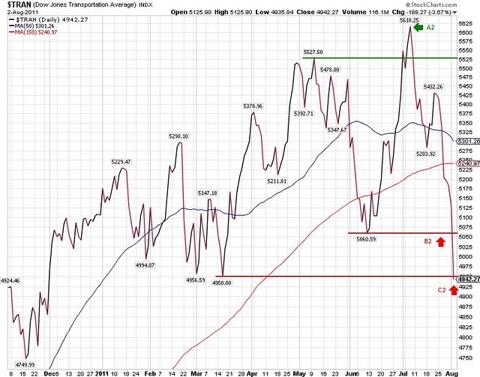 Starting back in May 2011, both indices had risen to the high then retraced (secondary reaction) in June before heading higher. The Transports broke above the May high hitting 5,618 (point A1). The Industrial, however, failed to confirm by going to a new high and reached only 12,724 (point A2). This first non-confirmation was a definite sign of bearishness, although it did not signal a bear market had begun.

As our April 6, 2011 Dow Theory article indicated, “What we see from the Transports on the way up we may also see on the way down.” August 2, 2011 was no exception to that idea. The Transports didn’t bother falling to the prior secondary reaction levels set in June, instead it plummeted past the March 2011 low. Both the Industrials and the Transports closed the day lower than such key support as noted in point B. The Industrials closed slightly below at 11,866 (point B1) while the Transports tumbled to 4,942 (point B2).

What is most worrisome now is that the Transports have taken out both the June low and the March low of 4,950 as seen on the chart at point C2. The Industrial index may appear to have quite a distance to go, but our calculations reveal that it would take only -2.1% decline for the index to confirm the Transports (point C1) action. Confirmation of the March lows by the Dow Industrials would be a devastating signal for the stock market and economy going forward.

The characteristics of the market in the last several months are not unlike what was experienced back in November 2007…The similarities between now and 2007 don’t end there. The charts of the Industrial Production Index ((INDPRO)) show a pattern of trying to achieve new highs in 2007 and the present but then failing. 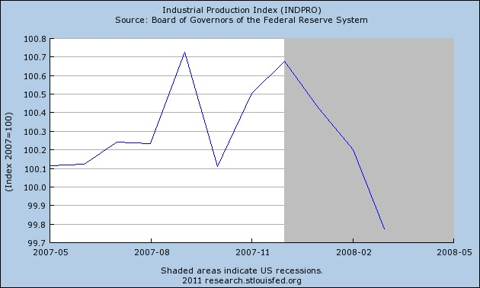 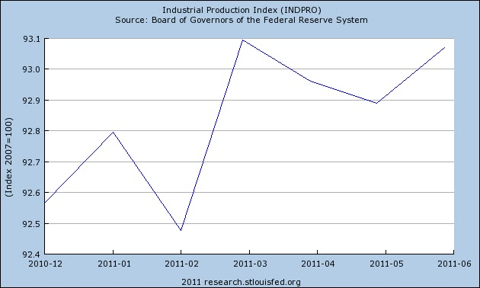 We’d be jumping to conclusions if we went so far as to conclude that the July Industrial Production Index numbers would not exceed the March 2011 high of 93.0943. However, we would be surprised if the INDPRO, despite already being so close to the high, manages to go above the (revised) highs that were set in June and March 2011.

The caveat to our analysis on the Dow Industrials and Dow Transports is the possibility that the Industrials actually don’t go below the low set in March 2011 (considered a divergence or non-confirmation of the trend)…[in which case] we would essentially be in a Dow Theory no-man’s land. Under such conditions, the bias should be towards being bearish but on a wait and see basis.