The S&P500 is likely to achieve a secular (long term) peak this month, then

So says Greedometer (www.TriWealth.com) in edited excerpts from his original article* as posted on Seeking Alpha under the title The Rats Are Jumping Ship: Welcome To The Top Of The Stock Market.

When corporate insiders are panic selling – and that’s what this is – frequently what follows is a peak in the S&P500 within a month or two, then a collapse. Intuitively, this seems unsurprising because if someone’s going to have a good read on earnings prospects for the next several quarters, it would be C-level executives. When an earnings picture is weak, usually C-level execs provide guidance that is muddy or foggy. If they were to provide the same assessment that led them to dump their own shares, the stock price would get hammered…Thus, for obvious and unflattering reasons, I refer to this type of scenario (insiders panic selling but providing foggy earnings guidance before a stock market collapse) as ‘the rats jumping ship’.

The Top of the Market is In!

Let me put some more meat on the bones for my dire and explicit stock market collapse. Between now (October 5th 2012) and mid-January 2013, we’ll see volatility, but likely end up within 50 points of today’s S&P500 close (1460). In other words, this is what the top of the US stock market looks like – and there’s a long way down.

You Can Not Say “No One Saw It Coming”

If you manage people’s money for a living, it’s never a good time to proclaim you are convinced the stock market is on the verge of taking an epic drop. Your clients might leave, putting their assets into CDs earning 0.5% until the storm blows over. Or worse, your analysis could be correct, but an intrusion by the Fed (or ECB) prevents the stock market collapse you identify and prepare for (say by going short). To many, it won’t matter that the Fed/ECB action validates your analysis. They’ll label you a perma-bear. On the whole, your investment management business will be less likely to lose clients if you ride along (oblivious to the building peril) on the way up, then claim ‘no one saw it coming’ on the way down.

This article is going to make it clear that before the S&P500 melted down previously, there were some very clear warning signs – and those same signs are flashing now.

These warning signs are prone to false alarms, so I have combined them into two algorithms with the express purpose of maximizing warning effectiveness and minimizing false alarms. Each of the two algorithms has an output gauge that represents risk.

The two gauges are used to present a view regarding risk to the S&P500. Note, the price of the S&P500 is not an input.

The 8 Inputs to the Strategic Greedometer Algorithm

There are eight inputs to the strategic Greedometer algorithm. They’re shown in the figure below. (The image is a partial screen shot of the interactive Greedometer gauge on my website (see here). The top 4 inputs are adjustable, which is why they appear different than the bottom 4.)

The experienced investor will be familiar with most of the Greedometer inputs:

On Friday, the VIX dropped under 14 — an exceptionally low reading showing fear has taken a holiday. A necessary ingredient for a secular stock market top.

2. ECRI WLI: The Economic Cycle Research Institute (ECRI – www.businesscycle.com) Weekly Leading Indicator (WLI) is an excellent proxy for US GDP growth. Ordinarily GDP growth rates peak and roll over approximately 3-6 months prior to the stock market peaking and initiating a collapse. Our most recent peak in GDP growth was a +4.1% annualized rate in 4Q 2011.

Right on time, the US stock market peaked in April and was on the verge of beginning a second leg down when the ECB’s threats paused the collapse. The Fed piled-on with QE3 last month for good measure but the sugar-rush effects of monetary policy are once again wearing off. 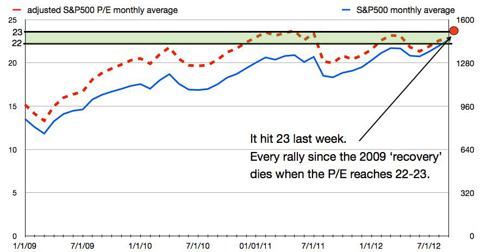 3Q earnings season kicks off October 9th. By mid-November most companies will have reported. Profit margins for the entire quarter are likely to drop to an 8-handle. I submit, they’ll probably drop to the 3.5% range by next summer.

The OEX 100 index is highly correlated with the total equity market, but sometimes the options activity on these two markets diverge. It turns out there is a markedly higher proportion of retail / small investors using options on the broad equity market than with the OEX 100. When there is a large divergence in readings, the investors betting with the OEX are right a lot more than they’re wrong.

Prior to and at secular stock market peaks, the Greedometer Put/Call value rises considerably. This reflects retail investors loading up with Call options at the stock market top while hedge funds and others are loading up with Put options. Last month the spread in the Put/Call ratio on these indexes was very high i.e., the OEX 100 options buyers were very bearish while the broad equity market options buyers were very bullish. 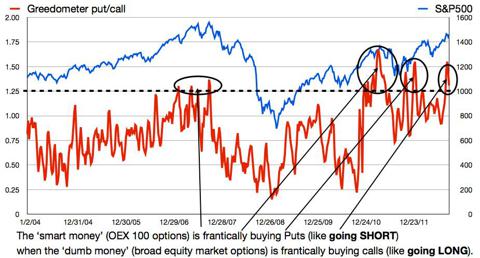 6. Buy Sell Climax: A Buy climax identifies weeks where very large numbers of US stocks reach a 52-week high but close lower in price for the week (suggesting a stock market top). A Sell climax is the opposite.

Buy and sell climax readings have been very low lately. I would expect a very high buy climax reading within the next 2-3 weeks, suggesting a secular market top has been seen.

I would expect the reading to climb higher this coming week and keep climbing to exceptionally high readings (approaching 3:1) if there is any appreciable gain in the S&P500.

8. NYSE Margin Debt: This is the amount of money owed to broker-dealers by investors placing speculative bets ‘on margin’. Greed incarnate.

September’s NYSE margin data won’t be available until near the end of October, but I expect it will show a sizable increase to one of the highest readings since the 2009 bottom. Widespread stock market greed is a necessary ingredient for a secular market top.

There you have it. A walk-through of the Greedometer, and an application with current data.

Can We Expect Further QE?

This exceptionally dire baseline forecast can only be paused by new and larger efforts from the Fed, ECB (European Central Bank), and/or PBOC (People’s Bank of China). Perhaps that will materialize again.

Europe: However, if you saw last week’s European inflation data, it is clear Europe is hitting the point of diminishing returns from the ECB euro currency printing press because even amid recession, inflation is creeping up, and it’s not being driven by demand.

U.S.: Here in the US, QE2 took the US inflation rate from roughly 1% to nearly 4%. Since QE2 ended, inflation has been falling, but QE3 may rekindle inflation once again. Indeed, inflation’s corrosive characteristics are almost certainly the principal reason QE3 is half the size of QE2 i.e., $40B/month in new printing vs $80B.

China: I can’t comment on the veracity of Chinese inflation data, so I’ll leave it alone.

On the whole it seems the global economy is running out of monetary policy steroids that don’t come with equally painful side effects. I would not count on central banker actions stopping these economic collapses many more times. Perhaps not at all.

I have no interest in scaring investors. I don’t sell gold or annuities. I do macroeconomic as well as fundamental and technical market research (going back nearly 14 years), and have combined this research into two proprietary algorithms that represent US stock market risk.

When the Greedometer redlines (exceeds a reading of 7000), the S&P500 peaks shortly thereafter, then begins to collapse. The gauge has been very close to 7000 over the past couple weeks, and I suspect will crack the 7000 barrier within the next two.

In the financial world, the month of October is synonymous with stock market crashes.  So will a massive stock market crash happen this year?  You  never know. Hopefully we’ll get  through October (and the rest of this year) but, without a doubt, one is coming at some point. The truth of the matter is that our financial system is even more vulnerable than  it was back in 2008 and, as such, many financial experts are warning that the next crash is rapidly  approaching and that those on  the wrong end of the coming crash are going to be absolutely wiped out. Let’s take a look at some of  the financial experts that are predicting really bad things for our financial  markets in the months ahead. Words: 1634

2. Yardeni & Dent: Will It Be Trick or Treat for Investors This October? Is a Stock Market Crash Coming?

4. Goldman Sachs: The Fiscal Cliff Is a Real & Present Danger to Future Level of S&P 500 – Here’s Why

5. I’m Worried About the Likelihood of a Sharp Market Decline This Fall – For These Reasons

6. These 6 Factors Suggest Avoiding Equities in the Foreseeable Future