Debt Bubble: We're in a Dangerous New Phase – Here's Why

The head of the International Monetary Fund, Christine Largarde, said Friday the world economy is entering a 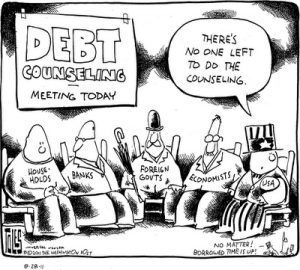 “dangerous new phase.”  Lagarde is referring to a debt bubble, the likes of which the planet has never seen before, and the possibility that it could all unravel at any moment.  Uncertainty over the debt crisis in Europe is what caused the Dow to crash more than 300 points at the end of last week.   What is Lagarde going to do about the debt problem? Words: 1752

So says Greg Hunter (www.USAWatchdog.com) in an article* produced in its entirety. As editor of www.munKNEE.com (Your Key to Making Money!) this is the first time I have posted an article that did not need to be edited, abridged or reformatted to ensure a fast and easy read so it is presented below for your edification.

Hunter goes on to say:

“She warned that both advanced and emerging economies faced key economic challenges, and that governments must ‘act now’ to stop further contagion.  ‘Policymakers should stand ready, as needed, to take more action to support the recovery, including through unconventional measures,’ Lagarde said.”

Lagarde is surely talking about revving up the global printing presses for more bailouts.

“Even senior figures in Merkel’s conservative Christian Democrats (CDU) are leaving open the possibility of default.  ‘The way things are looking, you can no longer rule out a possible Greek restructuring,’ CDU budget expert Norbert Barthle told Reuters, when asked about a default or euro zone exit.”

So which is it?  Will it be bailout or default?  Who knows, maybe a little of both before it is all over. A post on Zerohedge.com Friday may give the answer.  It reported,

“Wondering what is next for Europe? Don’t be. With Jurgen Stark, aka the last real hawk at the ECB, gone, here comes “the printing.” SocGen’s (Societe Generale) Dylan Grice explains.  From SocGen:  Suppose that Italy or Spain get caught up in the whirlwind like Greece, Ireland and Portugal, as threatened to happen last month. Maybe the Italian political situation deteriorates, maybe Ireland defaults, maybe Greece will go revolutionary, or maybe an ill-advised wayward comment from an influential European politician will spook markets and send them into renewed tailspin. We don’t know which of these will happen, if any. All we know is that these are some of the many plausible triggers for a further deterioration in this fragile situation.”

That “fragile situation” would mean a panic set off by an impending debt implosion, but SocGen’s Grice says the powers will not allow it to happen.  In the end, there will be a burst of money printing to stave off insolvency that has already infected many European banks.

Then, there is the absurd idea that Europe and America, for that matter, can “grow” their way out of the trillions of dollars of debt the western world has racked up.  An Associated Press story on Friday said,

“The argument put forth by (Tim) Geithner and others is that the best deficit-reducer is growth: When the economy is humming, it offsets spending and drives down both the size and the proportion of deficits. Rather than trying to scrimp their way back to prosperity, world economies need to spend money to make money.”

The “spending” is code for printing money out of thin air, and “growth” is really code for inflation.

It looks like European banks will need some cash long before they can “grow” their way out of the tremendous debt they are in.  Just last week, Deutsche Bank CEO Josef Ackermann said,

“It is an open secret that numerous European banks would not survive having to revalue sovereign debt held on the banking book at market levels.”

There are twenty Federal Reserve primary dealers of Treasury debt around the planet.  Do you think the Fed will let a single one fail?

Economist John Williams at Shadowstats.com says for the Federal Reserve “systemic failure is not an option.”  The financial crisis in 2008 caused the Fed to dump $16 trillion into the world economy.  Five trillion dollars was pumped into foreign banks alone to keep them afloat.  In his latest report, Williams said,

“The U.S. and global financial markets remain extraordinarily volatile and unstable, with systemic instabilities offering the potential, again, of systemic failure.  Following the collapse of Lehman in 2008, the U.S. Treasury and the Federal Reserve committed to preventing a systemic collapse at any cost.  They created and spent, loaned or guaranteed whatever money was needed to forestall systemic failure, kicking the proverbial can down the road.  Most of the actions taken then and since, however, were stopgap measures; little was done to address the systemic and economic crises fundamentally.  At present, the system has moved enough further along the road that the can likely will be kicked again.  Now, though, the road ahead drops off a cliff, well within current kicking distance.”

I think the “kicking distance” and the “cliff” are somewhere between now and early 2013.

1.  Will Greece Default, the Euro Unravel and the U.S. Dollar be Saved?

Greece is going to default and even take the euro, and maybe the EU, with it. There will be 5 investment opportunities should that unfold as expected and one of them will be the U.S. dollar. [Let me explain.] Words: 1187

2.  U.S. Financial System is a Shell Game, a Confidence Trick, a Ponzi Scheme, Which Will Eventually Collapse!

Over the past two months stock markets have crashed around the world and gold prices have soared as global investors decided that the U.S. has lost its race against time. A new recession is upon us before we even half-closed the output gap left open from the last recession. It means even larger deficits and an even weaker dollar. The price of gold and Treasury bonds is telling us that a full-blown international bond and currency crisis is approaching. There is no international policy mechanism available to stop the panic short of re-opening the gold window that the U.S. closed unilaterally and “temporarily” in 1971. [Let me explain.] Words: 3025

5.  Why It’s Exit Time – For Your Gold, Your Wealth and Your Family

The United States and most of Europe…risk an eruption and collapse of the mountain of unsustainable sovereign debt built up over the last two decades. Frankly, the U.S. dollar and national debt situation is so dire – and our means to contain a sovereign debt crisis so limited by multiple wars and Washington’s debt and political incompetence at home – that anything could happen, almost overnight. [The best] America and most European governments and the central banking elites, which created the criminal sovereign debt fiasco, [appear able to do is] try to buy more time and delay the inevitable. This inaction means the threat of an immediate US debt and dollar collapse cannot be ruled out. Therefore, readers who have not protected themselves certainly have cause to worry because now could be too late. [Let me explain further.] Words: 1689

A predictive software program called Senturion, developed for the U.S. military and sporting a 85% accuracy rate, has concluded that Greece is going to default. [Let me explain further.] Words: 244

7.  Unprecedented Financial Storm of Unknown Scope is Engulfing Us
If you thought the global financial crisis of 2008 was difficult, wait till the sequel comes to your doorstep…An unprecedented financial storm of unknown scope and dimension is upon us…there is a civilization-scale catastrophe taking place and there will be little or no recovery from it for as far as the eye can see into the future. Words: 1450
8.  Coming “New World Order” Revolution Will Be Dramatic (and Ugly)

SocGen has published a fantastic, must read, big picture report which compares the world in the 1980/1985-2000/2005 time period and juxtaposes it to what the author, Veronique Riches-Flores, predicts will happen over… the period from 2005/2010 to 2025/2030. She sees dramatic changes but, unfortunately, they will not be pretty. Let’s take a look at what the report has to say about the future. Words: 3025

The next crisis will be a Crisis of Faith pertaining to the US Federal Reserve… when the market begins to realize that the Fed CANNOT backstop the entire financial system (it never could but most people hoped regardless) – and…when this happens, THEN the REAL crisis will hit and it will make 2008 look like a picnic. Bernanke has [already] admitted publicly that he’s clueless [as to] what’s going on [and this] is a MAJOR step towards the world realizing that he’s lost control. [As such,] if you’re not taking steps now to prepare for what’s coming, you need to start moving. [The REAL crisis is coming – soon! Let me explain.] Words: 1018