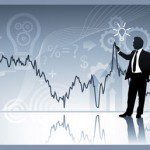 So says Doug Short, vice president of research at Advisor Perspectives (http://advisorperspectives.com/dshort) in edited excerpts from his original article* entitled The Market Is Now Between 33% And 51% Overvalued.

Here is a summary of the four market valuation indicators I updated at the  beginning of the month:

To facilitate comparisons I adjusted the two P/E ratios and Q Ratio to  their arithmetic means and the inflation-adjusted S&P Composite to its  exponential regression. Thus the percentages on the vertical axis show the  over/undervaluation as a percent above mean value, which I use as a  surrogate for fair value.

Based on the latest S&P 500 monthly data, the  market is overvalued somewhere in the range of 33 – 51%,  depending on the indicator. This is an increase over the previous month’s 31 – 48% range.

I’ve plotted the S&P regression data as an area chart type rather than a  line to make the comparisons a bit easier to read. It also reinforces the  difference between the line charts — which are simple ratios — and the  regression series, which measures the distance from an exponential regression on  a log chart.

The chart below differs from the one above in that the two valuation ratios  (P/E and Q) are adjusted to their geometric mean rather than their arithmetic mean (which is  what most people think of as the “average”). The geometric mean weights the  central tendency of a series of numbers, thus calling attention to outliers. In  my view, the first chart does a satisfactory job of illustrating these four  approaches to market valuation, but I’ve included the geometric variant as an  interesting alternative view for the two P/Es and Q.

As I’ve frequently pointed out, these indicators aren’t useful as short-term  signals of market direction. Periods of over- and under-valuation can last for  many years but they can play a role in framing longer-term expectations of  investment returns.

At the current low annualized inflation rate, and the extremely weak return on fixed income  investments (Treasuries, CDs, etc.) the appeal of equities, despite  overvaluation risk, is is not surprising however, at present, market overvaluation continues to suggest a  cautious long-term outlook and guarded expectations.

1. I’m Worried About the Likelihood of a Sharp Market Decline This Fall – For These Reasons

4. These 6 Factors Suggest Avoiding Equities in the Foreseeable Future

5. Goldman Sachs: The Fiscal Cliff Is a Real & Present Danger to Future Level of S&P 500 – Here’s Why

“Portfolio managers have been swayed by hope over experience” when it comes to anticipating the effects the fiscal cliff will have on markets. Investors aren’t giving as much attention to the fiscal cliff as they should be, and that may be helping to set the markets up for a repeat of last year, when the debt ceiling negotiations sent stocks plummeting

Share
Previous 2013 Gold Price Projection: $2250-$2550 By Q2 (+2K Views)
Next What is the Best Way to Inflation-Proof Your Portfolio? Here are the Options and Recommendations (Almost 2K Views)