Three indexes of the Federal Reserve…calculate and report statistical measures of financial stress in the U.S. economy on a regular basis…[and] all three have returned to their pre-recession levels last seen in May 2007. [What does that mean for stock market valuations? Let’s take a look.] Words: 460; Chart: 1

So writes Mark J. Perry in edited excerpts from his original article* as posted on seekingalpha.com entitled 1 Reason For Market Rally? Financial Stress Has Returned To Mid-2007 Levels By 3 Fed Measures.

This post is presented compliments of Lorimer Wilson, editor of www.munKNEE.com (Your Key to Making Money!) and the Intelligence Report newsletter (It’s free – sign up here), and may have been edited ([ ]), abridged (…) and/or reformatted (some sub-titles and bold/italics emphases) for the sake of clarity and brevity to ensure a fast and easy read. Please note that this paragraph must be included in any article re-posting to avoid copyright infringement.

Perry goes on to say in further edited excerpts:

They appear together in the chart below from January 2004 to March 2013. 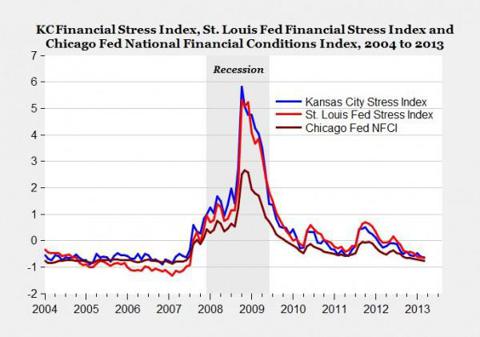 Here’s a summary of the March stress indexes:

Enjoy this site? Like to have every article sent to you?

Go HERE and sign up to receive your Intelligence Report

It’s FREE but limited to only 1000 active subscribers

Based on these three different Federal Reserve bank measures of financial stress that have all shown a high degree of historical accuracy in assessing the amount of stress in U.S. financial markets, we can conclude several things:

The return of financial stress to mid-2007 by three different measures indicates that financial conditions have now normalized and stabilized at historical averages.

Changes in economic indicators, copper and other commodity prices and stock market trends are covered in this month’s market intelligence infographic.

2. Stocks Are NOT In Another Bubble – Here’s Why

U.S. stocks are off to one of their best starts in years. Most indices are up 10% year to date, prompting many investors to ask: “Are we in another bubble?” The answer is no, at least when it comes to equities. Here are three reasons why:

3. Research Says Stock Market Bull Should Continue Its Run Until…

4. These 4 Indicators Say “No Stock Market Correction Coming – Yet”

5. Can Photos of 35 Swimsuit Models Be Wrong? Lastest “Swimsuit Issue Indicator” Suggests An UP Year for S&P 500!

6. Bull Market in Stocks Isn’t About to End Anytime Soon! Here’s Why

8. 5 Reasons To Be Positive On Equities

9. Start Investing In Equities – Your Future Self May Thank You. Here’s Why

11. Sorry Bears – The Facts Show That the U.S. Recovery Is Legit – Here’s Why

Today, I’m dishing on the unbelievable rebound in residential real estate, pesky  rumors about the dollar’s demise and a resurgent U.S. stock market. So let’s  get to it.