Crude Oil: Which Countries Consume It Most Efficiently? (+2K Views)

tie between the amount of energy a country consumes and their GDP and is an excellent way to predict a country’s economic productivity. [This article analysis the daily number of barrels of oil consumed for 20 countries relative to their PPP adjusted GDP. Germany has the largest residual of all developed countries followed closely by the U.K. while the U.S. has the poorest and Canada is not far behind. Read on to determine just how efficient your country actually is in its crude oil utilization.] Words: 470

So says Tom Guttenberger in edited excerpts from his original article* as posted on Seeking Alpha.

Guttenberger goes on to say, in part:

Shown below is a linear regression of PPP-adjusted GDP against the number of barrels of oil consumed daily. For the regression I used countries that ranked in the top 20 for both statistics.

As illustrated by the ~.93 R-squared figure, the amount of oil consumed by a country is an excellent way to predict their economic productivity…. 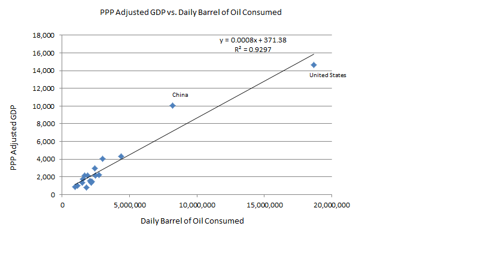 An examination of the residuals [in the graph below shows that] the United States underperformed the prediction by the largest nominal figure and China outperformed by the greatest.

Before going any further, I would like to add [the following] caveat to the above results: 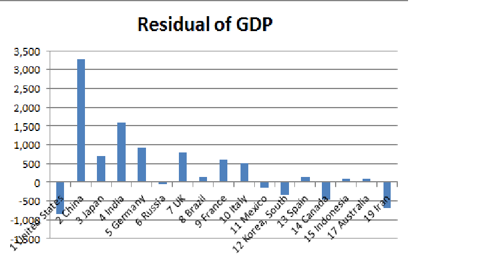 Most interestingly, the residuals of Germany, France, Italy, and even Spain are all positive. Germany has the largest residual of all developed countries and is a good sign of things to come for the country’s economy going forward. These positive residuals for EU nations highlight the superior infrastructure in these countries compared to the United States. Rather than a sprawling system of highways, the public transportation and higher relative population density of Europe helps position them to execute more efficiently on their resources….

* http://seekingalpha.com/article/620961-gdp-per-barrel-of-oil-consumed-which-countries-are-executing-efficiently  (To access the above article please copy the URL and paste it into your browser.)

Coal, hydroelectric and oil are increasingly in high demand to meet the world’s growing appetite for power. In fact, global energy consumption grew 5.6 percent in 2010, the highest rate since 1973. Discover 10 other fascinating facts about worldwide consumption in this informative slide show.

2. The “Ins” and “Outs” of Investing in Commodities

Commodities have obvious appeal to active investors looking to generate profits from short-term price movements [but while] the volatility of this asset class is ideal for risk-tolerant individuals who actively monitor their positions…commodities may also have appeal to the long-term, buy-and-hold crowd…These potentially appealing attributes come with plenty of risk, [however, as] the path to commodity exposure is full of potential obstacles and pitfalls that can erode returns and lead to a less-than-optimal investing experience. Here are ten rules of thumb that will help you achieve a more successful experience investing in commodity markets. Words: 2871

3. 10 Questions You Need Answers to Before Investing in Oil & Gas Stocks

4. More of What You Need to Know Before Investing in Oil & Gas Stocks

5. Shale Oil Stocks Are On The Rise – Here’s Why

6. U.S. Has 3rd Largest Natural Gas Field in the World – Which Other Countries are Included in the Top 10?

Natural gas is increasingly becoming an important fuel in meeting the global energy needs. Let’s take a quick look at the largest natural gas fields in the world. Words: 300

Share
Previous Why & How the Euro Came About and What the Future Holds
Next Brent vs. West Texas Intermediate Crude Oil: What’s the Diff? (+2K Views)