The markets have heard Powell’s message of higher interest rates, and the damage they could cause the greater economy, loud and clear. The S&P 500 has slid 8.4% over the past month (as of the close of trading Wednesday), and the 2-year Treasury yield recently hit its highest level since 2007…How bad could it get? Ho can an investor survive the coming storm? [Read on!]

At the Federal Reserve’s annual retreat in Jackson Hole, Wyoming, Chairman Jerome Powell delivered unusually blunt remarks saying that the Fed would accept a recession as the price of fighting inflation…to “go hostile” to fight the 8.3% level of inflation that has permeated the economy…by raising rates until they force unemployment higher and slow wage growth…[even if that meant “crashing the markets”…[just like] Paul Volcker’s Fed did in the early 1980s…

When markets swoon, many stockholders turn to Warren Buffett for investment advice. The “Buffett Indicator” is a valuation measure that compares the stock market’s capitalization to the Gross Domestic Product where any number above 1.0 is overvalued, and below 1.0 is undervalued. .. Investors currently are paying almost 2.44X what the economy can generate in revenue and earnings [and shows] that overvaluation is unsustainable when the market capitalization of stocks grows faster than what economic growth can support.

The chart below…plots the business cycle going back to 1951, with recessions marked as vertical grey lines…Notice that, just before a market crash, the Buffett Indicator, shown as an orange line, spikes. We see this:

[This all suggests that] return expectations for the next ten years are as likely to be negative as they were for the ten years following the late ’90s. 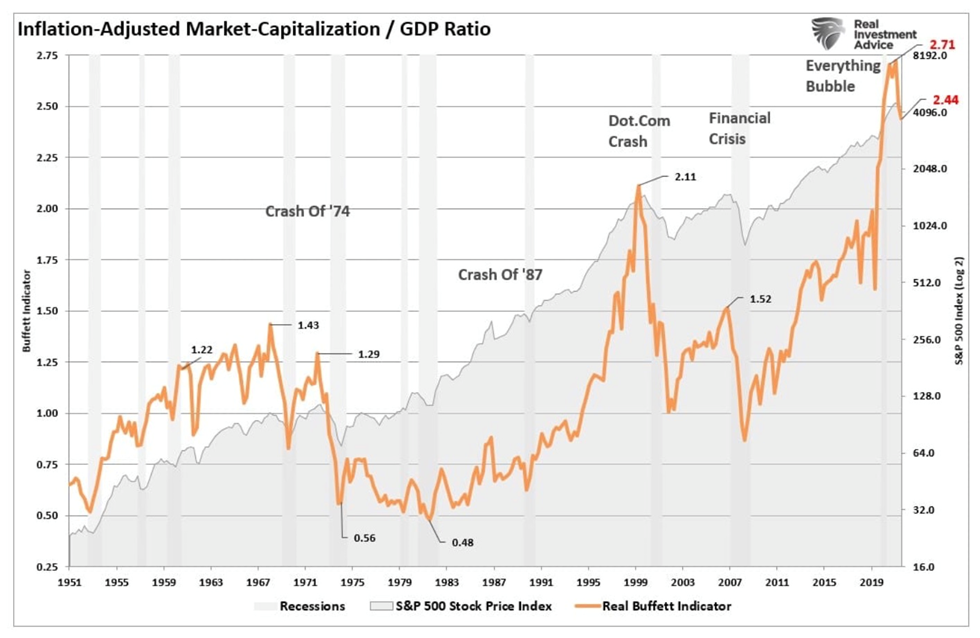 The S&P 500 has slid 8.4% over the past month (as of the close of trading Wednesday), and the 2-year Treasury yield recently hit its highest level since 2007. How bad could it get? [Well, according to Nouriel Roubini, in an interview with Bloomberg, we are about to experience]…

His advice to investors is “to be light on equities and have more cash.”

Stagflation and Debt Distress Is Coming

While some market observers believe the Fed will pivot to lowering interest rates, and restarting quantitative easing (QE), once the world is in recession, Roubini…doesn’t expect fiscal stimulus remedies because governments are “running out of fiscal bullets,” and high inflation means that “if you do fiscal stimulus, you’re overheating the aggregate demand.” Roubini, therefore, sees

[and,] in fact, this is precisely where we are now.

The World Bank Concurs That the Risk of Stagflation is Heightening

The World Bank admits that the risk of stagflation is heightening, stating in its latest report, ‘Global Economic Prospects’, that “stagflation risks are rising amid a sharp slowdown in growth.”

Survive the Coming Storm With Commodities

With the Buffett Indicator pointing to a “lost decade” of negative returns, and Nouriel Roubini predicting the recession will be “severe, long and ugly,” the obvious question is how to batten down the hatches and survive the coming storm. The answer, commodities, may surprise you. It certainly surprised me.

Commodities protect investments from rising prices and currency debasement, making them a good place to park your hard-earned cash. [That being said,] however, both the energy and materials sectors are considered very economically sensitive, exemplified by oil and copper pulling back from their (respective) June and March highs, [so]…when investing in natural resource equities, the commodity capital cycle is more important than the business cycle.

The chart below from Goehring & Rozencwajg, the Wall Street natural resource investment firm, shows the relationship between the Dow Jones Industrial Average and a commodity index going back several decades. It indicates periods when commodities are undervalued or overvalued — compared to the Dow. Where the green line dips below 75, commodities are cheap relative to financial assets. These periods typically represent bear markets for commodities. The chart shows the most undervalued years for commodities were 1929, 1969, 1999 and 2020.

G&R’s Commodity Prices/ Dow Jones Industrial Average chart above shows there hasn’t been a better setup for commodities than now, over a time frame spanning 120 years…

Even if the recession is long, commodities should be practically bullet-proof.

The above article is an edited ([ ]), abridged […], retitled, restructured, reformatted, highlighted and grammatically corrected version by Lorimer Wilson, Managing Editor of munKNEE.com, of an article by Richard Mills for the sake of brevity and clarity to ensure a fast and easy read.