The central bank gold-buying spree is expected to continue into next year as countries continue to create a hedge against geopolitical risk and diversify their reserves away from the US dollar.@Gold&Silver

According to data compiled by the International Monetary Fund and   reported by the World Gold Council through October of this year, 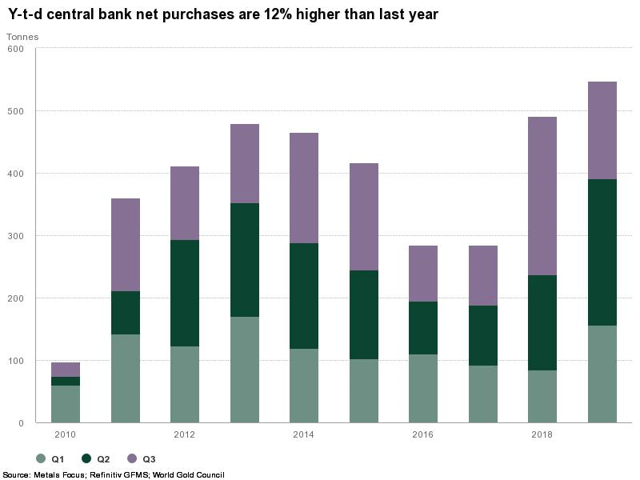 A number of analysts…expect the central bank gold-buying spree to continue next year.

[In addition to the above]…there is a quest by some central banks to diversify away from the U.S. dollar:…

World Gold Council’s Hewitt said that once central banks start accumulating gold, they generally continue for extended periods of time. He also noted that the underlying factors driving this rush to gold will likely remain in place.

Editor’s Note:  The above excerpts from the original article by Peter Schiff have been edited ([ ]) and abridged (…) for the sake of clarity and brevity.  The author’s views and conclusions are unaltered and no personal comments have been included to maintain the integrity of the original article.  Furthermore, the views, conclusions and any recommendations offered in this article are not to be construed as an endorsement of such by the editor. Also note that this complete paragraph must be included in any re-posting to avoid copyright infringement.