Cannabis companies are on the edge of disappearing just as quickly as they appeared due to numerous companies struggling to raise capital while reaching closer and closer towards insolvency; the result of aggressive supply production for an overestimated market, which made it difficult for companies to manage working capital and profitability.

By Jay Yi for eResearch.com

In the U.S., cannabis is still considered an illegal substance, therefore, distressed companies who are operating in state-governed jurisdictions do not have the option to file for bankruptcy as it is governed by federal jurisdiction; as a result, the U.S. cannabis industry may be filled with creditors chasing assets state by state.

This morning, Hexo Corp. (TSX: HEXO) raised C$40 million after announcing last month in its FQ2/2020 financials that it required a minimum capital raise of C$40 million to maintain compliance with certain debt covenants on outstanding credit facilities from CIBC and BMO.

Some companies were not so lucky in acquiring external capital, such as iAnthus Capital (CSE:IAN), who earlier this week, ended up defaulting on interest payments due March 31 on its debentures, with over US$159.2 million in debt obligations still outstanding on its balance sheet.

The cannabis industry has been on one of its largest down trends in its history mainly due to a misalignment of supply and demand. The Canadian cannabis market forecast anywhere from C$5 billion to C$10 billion in sales for last year but due to several factors including inefficient government implementation and over-estimations, the industry only recorded C$1.2 billion in sales.

The overestimation in sales had companies take aggressive measures to capture the largest market share, leading to weak balance sheets with unsustainable cash burn rates. As companies no longer need to accelerate production capacity, the once bustling M&A driven cannabis industry has settled down with a significant rise in terminated deals in the past year.

As these cannabis companies struggle to sustain operations with profits, other than cutting costs, the only option they have is external financing, but the industry is currently experiencing a drought in capital.  According to Viridian Capital Advisors, only two capital raises were executed for cannabis companies in the week ended March 27, compared with 17 capital raises for the same period last year.

Majority of Canadian cannabis companies have operational cash flow losses, with some holding large amounts of debt on their balance sheets. Therefore, a screen was done on S&P Capital IQ for cannabis-related companies with the highest debt levels to see how long these companies can sustain its burn rates with current assets.

Cash burn and number of quarters left till insolvency was analyzed for the top 12 “risky” cannabis companies with the highest debt levels by dividing net current assets with operational cash flow losses from the most recent quarter; capital expenses expected to reoccur were added back to operational cash flows. 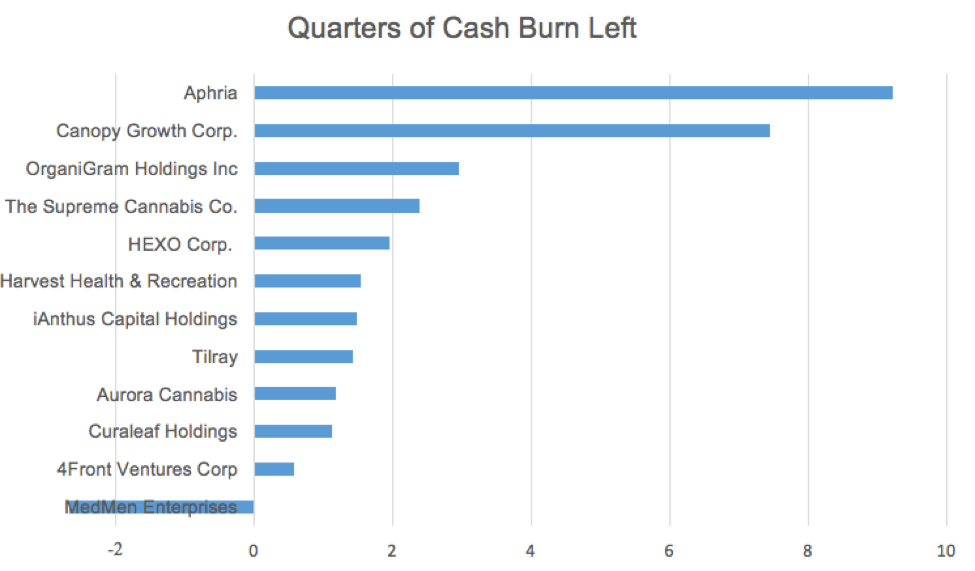 U.S. cannabis companies have varying levels of cash, with some companies having only enough cash to last for a few months based on historical cash burn rates.

Most of the debt-laden companies had less than a year of current assets left to sustain its most recent quarter’s operational cash flow loss. Companies with higher risks of insolvency included Tilray Inc. (NASDAQ: TLRY), who had the highest level of long-term debt at C$565 million. Canopy Growth Corp. (TSX: WEED) had the largest amount of total debt at C$954 million, but it is supported by C$2.7 billion in net current assets.

Looking at their year-end financials, MedMen Enterprises (CSE: MMEN) had the shortest runway with negative two quarters as it had higher current liability of C$247 million compared with its current assets of C$115 million. The negative runway meant it needed to quickly raise funds to sustain operations and, just last month, it announced an expected US$250 million to US$285 million in external funding to keep themselves afloat.

On the other hand, Aphria Inc. (TSX: APHA), who has been known to be one of the more fiscally run cannabis companies, has greater leeway with C$619 million in current assets with a much lower net cash burn rate of C$67 million.

According to S&P Global Market Intelligence, US$2.5 billion worth of cannabis-related M&A deals were terminated last year, with 95 cancelled transactions in 2019 compared with 48 in 2018. Last year, the largest terminated deals included a $1B hostile takeover deal between Green Growth Brands Inc. (CSE: GGB) and Aphria Inc. (TSX: APHA), and a $682 million acquisition between MedMen Enterprises Inc. (CSE: MMEN)  and  PharmCann LLC (private). 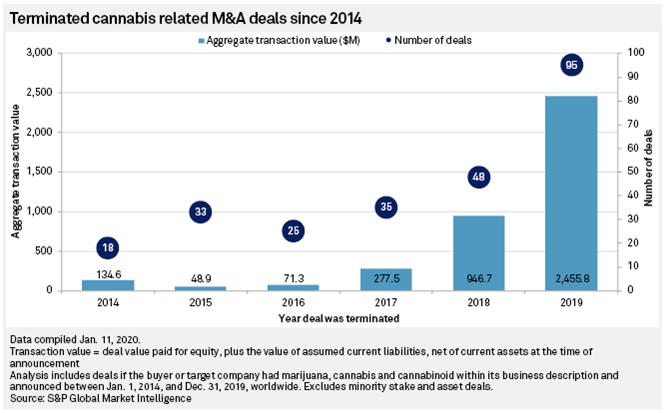 Though M&A activity has significantly decreased over the past year due to an increase in terminated deals, acquisition opportunities for discounted assets may turn up in the near future for companies and firms with high cash balances; several companies may have distressed assets for sale in the near future if they hit the end of their runways before raising funds.

eResearch.com has partnered up with munKNEE.com to provide visitors with a broader range of financial information including:

If you have enjoyed the above article then…

Scroll to very bottom of page & add your comments on this article. We want to share what you have to say!
Share
Previous COVID-19: U.S. States & Cities With Most At-Risk Populations Based on Age
Next Cannabis Central: Only 7 Pot Stocks Now Have Market Caps Above $1B