BofA: NO Further Fed Easings Until These 3 Key Triggers Are Met

Lorimer Wilson August 4, 2012 Comments Off on BofA: NO Further Fed Easings Until These 3 Key Triggers Are Met 1,974 Views

In a note to clients, BofA rates strategists Priya Misra and Shyam Rajan say the 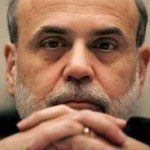 Fed is “waiting for the triple threat” – three key triggers that must be met before the Fed does any additional easing. They are…

So says Matthew Boesler (www.businessinsider.com) in edited excerpts from his original post*.

Misra and Rajan list the triple threat as being:

What’s next, according to BofA, is that “the market likely will focus on the triggers that might catalyze central banks into action.”

They think the conditions will be met by September.

*http://www.businessinsider.com/bofa-the-fed-is-done-easing-until-the-triple-threat-emerges-2012-8#ixzz22ozEfBHQ (To access the above article please copy the URL and paste it into your browser.)

If you are angry about LIBOR – angry that 18 banks can set one of the world’s most important interest rates in such a poorly supervised, ill-understood manner – you should be even angrier that just 12 people sitting in a room can set the world’s single most important interest rate to suit the needs of the stock market, all under the pretence of controlling inflation? Let me explain. Words: 810

2. Further QE Would Amount to _issing in the Wind! Here’s Why

“… those who are waiting for the Fed cavalry to ride over the hill and rescue the economy are doomed to disappointment….The banks are awash in loanable funds, businesses are cash-rich and opportunity-poor, and interest rates are already so low that lower still will not attract borrowing….More liquidity is unlikely to impart more impetus to the sluggish economy…. Congress and the President should not count on the Fed to bail them out of their mistakes…. Central banks are unable to help in the face of persistently flawed economic policies.”

By threatening to drop money out of helicopters to fight deflation – to leave a paperweight on the “print” button if you will – Bernanke convinced the market and all of Wall Street that the Fed would always be there to step in and save the day. [In fact, however,] the whole thing was a bluff meant to prop up the markets – the famed Bernanke Put – and it was a lie. The markets will be realizing this in the coming months, if not sooner, and when they do, we’ll see the REAL Collapse: the one to which 2008 was just a warm-up. [Let me explain.] Words: 444

At the risk of looking/sounding like some crazed religious fanatic usually seen carrying a sign or proclaiming: “Repent, the end is near,” I shall avoid the word “repent”. To me, the rest of that proclamation appears accurate and reasonable, at least with regard to our economic condition. [Let me explain:] Words: 1896

7. Events Accelerating Towards an Ultimate Dollar Catastrophe! Here’s Why

9. This Video – Already Viewed by 876,000 – Clearly Explains Why Economic Collapse of U.S. Is Inevitable

This short video – on the unsustainability of government spending – should be watched by everyone, including those not yet old enough to vote. It should be shown in every high school and college classroom. Anyone that cannot understand this presentation should not be allowed out without a guardian.

Share
Previous Take Note: What's Happening in Europe Could Cause MAJOR Crisis in U.S.!
Next FaceTheFactsUSA #9: Think You Know Who Gets Social Security? Think Again – These Facts Will Be A Surprise!