Lorimer Wilson January 15, 2014 Comments Off on Argentina In Advanced Stage of Yet Another Financial Panic/Meltdown (2K Views) 2,052 Views

With international reserves in virtual free-fall, the black market peso rate plunging, and no sign for months that

President Kirchner has any appreciation at all of the gravity of the situation, the country is in the advanced stages of another financial panic/meltdown. This will end badly, another chapter in the long history of Argentine financial crises extending back almost 100 years.

So says Scott Grannis (scottgrannis.blogspot.ca) in edited excerpts from his original article* entitled Another Argentine meltdown.

The last time Argentina suffered a currency collapse was in early 2002, when the peso plunged almost overnight from 1 to 1 to the dollar to almost 4 to 1. Not content with 12 years of relative prosperity since then, the Argentine government seems dead set on creating another as illustrated by the rapid melt down in the value of the Argentine peso as shown in the chart below. 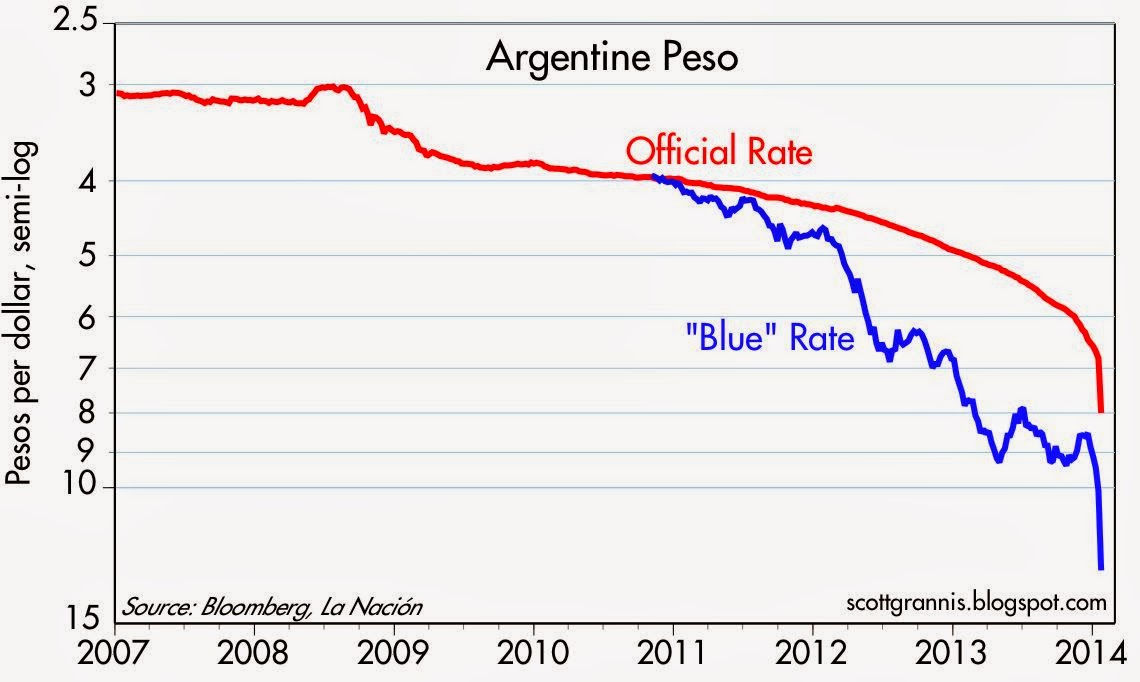 The problems began to get serious in 2011, when it first became apparent that the government was pegging the peso at a level that was too strong. The evidence for that can be found in the chart above, with the appearance of a black market (now the so-called “blue rate”) peso that was weaker than the official rate…and with the decline in Argentina’s international reserves that began in 2011. When Argentines perceive that the official rate is “too strong,” they want to convert their cash holdings into dollars, which are more likely to hold their value than is the peso over time.

[To the chagrin of the fellow in the following joke entitled “An Argentine Pervert”, the relative worthlessness of the Argentine peso is widely know. The story goes like this:

Argentines began to realize in 2011 that the official exchange rate was artificially high, and thus began the capital flight that has drained the government’s international reserves by almost 50% in the past three years. (The artificially strong peso peg forces the government to sell dollars in the face of an overwhelming demand on the part of the public to buy dollars.)

The government has of course tried to stem the capital flight by imposing exchange controls and import controls, but that has only exacerbated the problem. When it comes to confidence, the owners of capital want to know that they are free to leave if problems develop. If they begin to perceive that investing in a country is like a “roach motel” (i.e., you can put your money in, but you can’t get it out), then capital will find no end of ways to circumvent a government’s attempt to keep capital within its borders.

For the past few years, Argentines have been flocking to the U.S. to spend as much as possible with their credit cards, because in this manner they can effectively buy dollars at the official rate plus a 20% “surcharge” imposed by the government to discourage this practice but that’s better than buying dollars on the black market, where they would have to pay 50-70% more. We had some Argentine friends with us several months ago, and they wanted to stop at every ATM they saw, where they would then withdraw as many dollars as the machine would let them. After buying copious amounts of clothes and electronic goodies, they then sold the dollars they took back with them to Argentina on the black market, and easily paid for the cost of their trip. This is how dollars are fleeing Argentina these days.

Interestingly, the Argentine stock market (in peso terms) has almost tripled in the past two years, even as economic growth has slowed dramatically and inflation has risen to 30-35% per year. But in dollar terms, Argentine stocks have registered virtually no gain at all since 1992, when the peso was pegged at 1 to 1 to the dollar and stayed that way for a decade. I take this to be evidence that stocks can be a decent hedge against inflation over time, but not much more.

It’s time to cry once more for Argentina.

UPDATE: The decline of the peso accelerated today as the central bank apparently made no effort to prop up the peso with dollar sales. The dollar briefly hit 8.2 pesos, and is now trading just under 8. This marks a surge in the dollar’s value against the peso of almost 60% since the beginning of last year, and that in turn points to a 60% rise in Argentina’s general price level over the next year or so. That further implies a doubling of Argentina’s inflation rate.

UPDATE 2: The government-imposed “surcharge” on credit card purchases outside the country is now 35%. Band-aid solutions such as this only make things worse, as they effectively move the country closer and closer to a mega-devaluation, which in turn brings higher inflation and more money-printing, in what ends up being a vicious cycle that ends only when the government abandons all attempts to impose “order” on the economy and allows the free market to work its magic. We’re not there yet.

At this point the central bank has little choice but to announce either a significant devaluation of the official rate or a float of the currency but the underlying problem—too much government spending financed by printing money—will remain. Only a radical change in government policies can restore order to the Argentine economy, and that is unlikely as long as President Kirchner remains in control. It’s time for the grownups to take charge.

1. Will the U.S. Follow in the Footsteps of the Once Great – and Now Financially Desperate – Argentina? I Wonder

Like health, freedom erodes gradually over time… then all at once. We lose a freedom here, there, through a slow, measured deterioration of civil and economic liberty: body scanners at the airport; declarations of foreign accounts; mandatory health insurance and then, suddenly, there’s a bifurcation point when the deterioration goes nonlinear. It’s like the old saying about going broke– it happens gradually, then all at once. We lose our freedoms in the same way. [That is already happening in Argentina where the government is] screwing everyone, big time: banks, businesses, workers, retirees, professionals, entrepreneurs, even government employees and the U.S. is starting to go down this road as well. [Let me explain.] Words: 625 Read More »

2. How NOT to Run a Country: What’s REALLY Happening – and About to Happen – in Argentina

One can barely keep up with what is going on here in Argentina, since each day brings more ‘new’ government dictates, rules and initiatives which all seem to share the same features – dumb and dumber – and virtually all with guaranteed unintended negative consequences. Let me give you my on-the-ground insights of the lay of the land – of what is REALLY happening in Argentina – and about to happen! Words: 853 Read More »

3. These 21 Countries Have Experienced Hyperinflation In Last 25 Years

4. The Currency War: Which Country Will End Up With the Fastest Currency in the Race to the Bottom?

We believe that we are in the “competitive devaluation” stage presently [see graph below] as country after country is printing money in order to lower rates and doing whatever possible to devalue their currency – to have the fastest currency in the…race to the bottom – in order to export their goods and services. [The next stage will be protectionism and tariffs. This article gives an update on the race to debase.] Read More »