Are We On the Verge of a Second Recession? (+2K Views)

Are We Headed for a Second Recession?

So say Caroline Corbett & Lance Roberts (www.StreettalkLive.com/financialblog/)  in edited excerpts from an article*  which Lorimer Wilson, editor of www.munKNEE.com

(It’s all about Money!), has further edited ([  ]), abridged (…) and reformatted below  for the sake of clarity and brevity to ensure a fast and easy read. Please note that this paragraph must be included in any article re-posting to avoid copyright infringement. The authors go on to say:

With the recent release of the Chicago Fed National Activity Index, our proprietary Economic Output Index is just one small step away from crossing the 35 mark which has always been a pre-cursor to recession. 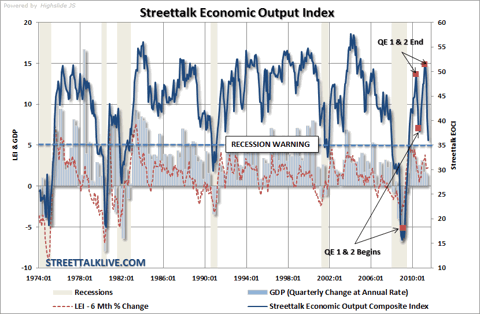 The unemployment rate remains high, housing prices are slipping into a secondary decline, consumer and business spending is slowing, while gas and food prices remain high, eating up more than 20% of consumers wages and salaries. Add on top of these factors the likelihood of a Greek debt default [see here (1) and here (2)], a slowdown in the eurozone [see here (3)], a weaker dollar [see here (4)] and Washington locked in debate over the debt ceiling [see below (5 – 10 )] — well, the list of risks far outweigh the positives. It doesn’t take an economist to figure out that any one of these factors could send us tumbling into a second recession. However, that doesn’t seem to deter Wall Street economists and main stream media, who all seem to be wearing rose colored glasses these days [see here (11)]…[who] claim this is simply a soft patch of the recovery.

David Rosenberg refutes the claim [that all is relatively well] in an interview with Bloomberg Television saying that it is not normal to have two soft patches so close together nearly two years after the recession ends – it doesn’t happen. This will be two separate recessions going on to say…that he believes that there is a 99% chance of another U.S. recession and the only reason he didn’t put it at 100% was that he needed a “margin of error”.  In his most recent issue of “Breakfast with Dave” [he noted] that real disposable income, household employment, real business sales, and manufacturing production all peaked in March [and that] this type of behavior was not characteristic of the soft patch last year, and [that] this is the first sign of a looming recession.

[T]he recovery to date in the economy has not been an organic one. With more than $5 Trillion injected into the system through various Federal interventions and stimulus, it is disappointing that we only increased GDP by a little more than $900 Billion in the last two years. That is expensive growth any way you price it and is unsustainable without further injections.

18 leading experts, not to be daunted by facts and figures, however, reported in a recent CNNMoney survey that they believe there is [only] about a 15% chance of a new recession. Of course, this is pretty much the same group of individuals who told everyone that the economic slowdown in early 2008 was just a “soft patch” as well.

Bernard Baumohl of the Economic Outlook Group believes the risks, however, are real saying [that] the fragile US recovery means the economy is much more vulnerable to geopolitical shocks and a rise in fuel prices. Since the instability in the Middle East is far from over, there are real risks for the U. S. and international economy.

Dr. Gary Shilling…also notes the threat to the economy of another drop in housing prices. There is currently an excess inventory of 2 to 2.5 million homes with only 500,000 homes being absorbed out of that inventory per year. This means that it will take at least 4 to 5 years to clear that inventory if rates stay the same. If home prices drop another 20% in order to clear the market, it will force price declines on existing homes that will move the number of underwater mortgages from the current level of 1 in 5 to more than 1 in 3. Shilling argues that the ripple effect will drive the economy into a second recession.

Robert Samuelson, in an article for the Washington Post, compares the current state of the economy to the climate of the economy during the “depression within a depression“ from 1937-1938…[and points out that it was] very similar to the economy today. Then, as now, commodity prices were rising rapidly and inflation fears were growing. Federal budget was criticized as too large and the president was perceived as anti-business. Similar complaints exist today. However, there are some significant differences between then and now. Policy reversal in 1937-1938 was much more drastic than anything being considered today. The federal deficit fell from 5.5% to .1% of GDP between 1936 and 1938. Today’s budget deficits are much larger as a share of GDP and prospective reductions are much smaller. Still, the parallels are unsettling.

Mark Thoma recently analyzed a graph of real GDP growth [see below] in an article for economitor.com in which, statistically speaking, the data suggest the definite possibility of a second recession . The graph shows a downward growth heading to below 2% GDP growth. This 2% line has been indicative of a recession in the past. Almost every drop below this line has led to a recession measuring back to 1947. The Fed, however, is hoping for a turnaround in the third quarter that could prevent us from hitting this line. Thoma believes the government needs to start taking action in order for this to happen. “Policymakers need to realize that unemployment, not the deficit, is the immediate crisis to be addressed and take action. Unfortunately for the unemployed, that’s unlikely to happen,” he stated in the article. 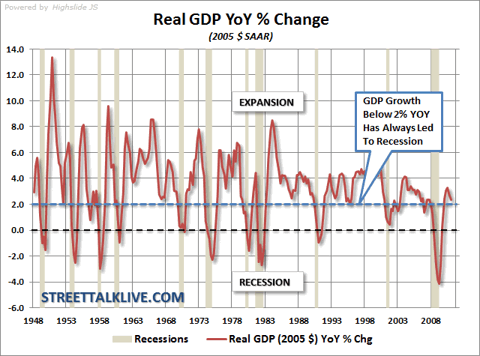 We agree with Thoma that unless some initiatives are taken we will hit that 2% mark very soon and head into our second recession. Of course, all of this is barring another round of Quantitative Easing by the Fed. However, even that may not be enough to offset the real problems facing the U.S. economy.

Share
Previous What Caused the Financial Crisis? 3% Down Mortgages or Wall Street Greed? (+2K Views)
Next Americans! Where's the Outrage Regarding Your Financial Situation?