Any Way You Look At It – Inflation Is On The Rise!

We can make some inferences about how inflation is impacting our personal expenses depending on our relative exposure to the individual components [and any way you look at it inflation is on the rise – so let’s take a look at the particulars.] Words: 769

So says Doug Short (www.advisorperspectives.com)  in an article* which Lorimer Wilson, editor of www.munKNEE.com (Your Key to Making Money!), has further edited ([  ]), abridged (…) and reformatted below  for the sake of clarity and brevity to ensure a fast and easy read. The author’s views and conclusions are unaltered and no personal comments have been included to maintain the integrity of the original article. Please note that this paragraph must be included in any article re-posting to avoid copyright infringement.

[Below] is a table showing the annualized change in Headline and Core CPI for each of the past five months. I’ve also included each of the eight components of Headline CPI and a separate entry for Energy, which is a collection of sub-indexes in Housing and Transportation.

The Trends in Headline and Core CPI

The chart below shows Headline and Core CPI for urban consumers since 2007. Core CPI excludes the two most volatile components, food and energy. 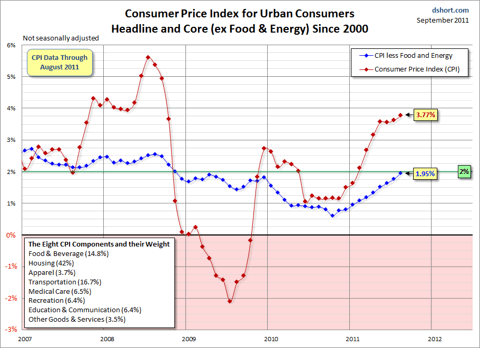 Core CPI has been on the rise but and is now at the Fed’s inflation target of 2% (1.95% at one decimal is 2%). However, the more attention-grabbing headline CPI has more than doubled since January.

For a longer-term perspective, here is a column-style breakdown of the inflation categories showing the change since 2000. 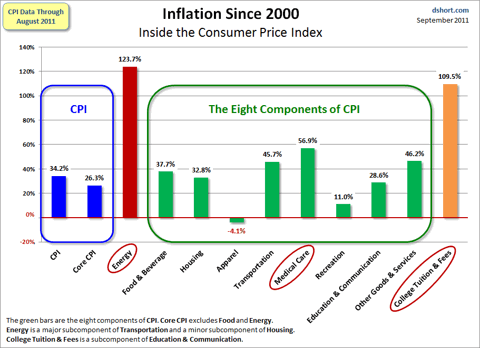 1.  Inside The Consumer Price Index: What Inflation Really Means To You

The Fed justified the last round of quantitative easing “to promote a stronger pace of economic recovery and to help ensure that inflation, over time, is at levels consistent with its mandate”. In effect, the Fed is trying to increase inflation, operating at the macro level but what does an increase in inflation mean at the micro level — specifically to your household? [Let’s take a look.] Words: 1555

3.  Environment is Inflationary, NOT Deflationary – Here’s Why

4.  The CPI, TIPS and Protecting Yourself From Inflation: What You Need to Know