Below are 9 exciting gold charts which clearly show that gold is about to move forward – greatly – in the months to come. Take

a look at why that is the case and then take action as your means permit.

The above is a introduction to the original article* by Peter Degraaf (pdegraaf.com/) entitled Some exciting gold charts for you!.


[The following article is presented by  Lorimer Wilson, editor of  www.munKNEE.com and the FREE Market Intelligence Report newsletter and may have been edited ([ ]), abridged (…) and/or reformatted (some sub-titles and bold/italics emphases) for the sake of clarity and brevity to ensure a fast and easy read. This paragraph must be included in any article re-posting to avoid copyright infringement.]

Below are edited excerpts from that article:


Historically, the month of March is not very ‘gold-friendly’ but…

April and May are more conducive to providing a rally. The March pullback came on schedule and appears ready to turn into a rally, – see gold chart in this essay. (Chart is courtesy of Seasonalcharts.com.)


2. Number of US Dollars Currently Circulating

The number of USD circulating is over 1 trillion dollars (including many $100 notes), rising exponentially, and…

this is in addition to the trillions of dollars in digital form, which make up the money supply. (Chart is courtesy of Mark J. Lundeen)

3. The US Monetary Base

The two tiny ‘blips’ in yr 2000 and 2001 represent the large amounts (at the time) of money shoveled into the system by Mr. Greenspan to keep the system afloat during Y2K and  ‘911’. 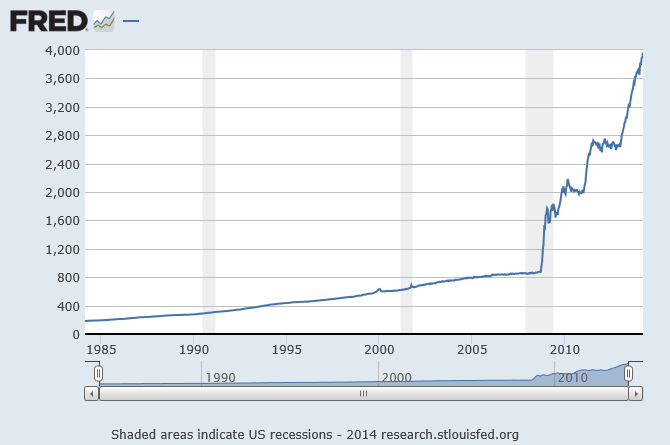 The amount of money that is added at this time is mind boggling.   During the last 30 day period the base increased by 80 billion dollars.  No ‘tapering’ here.   While not all of this money will find its way into gold and silver, some of it will, and as the rally that began on December 31st picks up steam, more and more of this liquidity is expected to move into the precious metals sector. (Chart is courtesy Federal Reserve Bank of St. Louis.)

4. A Comparison of Gold to the US Monetary Base

The interpretation is that gold is cheaper than at any time during the past 100 years! 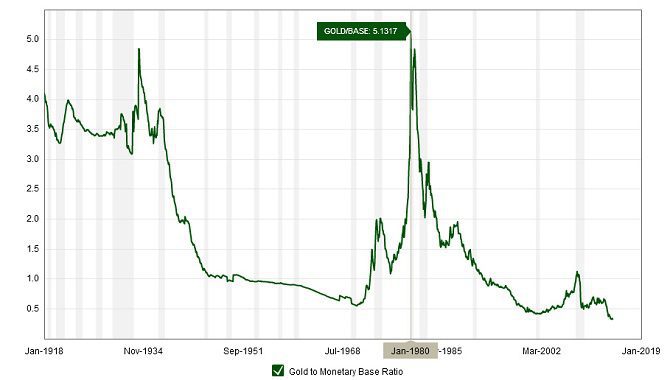 The current reading is 0.4 and…when it climbs back to the 4.0 zone, (10 times today’s gold price), it will be time to sell gold and look for something else. (The chart is courtesy Macrotrends.net)

5. A Comparison of the Current Gold Price to the Purchasing Power of a US Dollar in 1920


The chart below, courtesy of Mark J. Lundeen, confirms the fact that gold is very cheap at this moment.

Mr. Lundeen calculates that gold needs to rise to $8750 in today’s dollars to return to what it was worth in 1920.  This sets the stage for a continuation of the current gold bull market.  Mr. Lundeen has created a similar chart for silver (not shown) which shows silver would need to rise to $435/ounce to equal its worth in 1920.   This price dovetails with the price arrived at by Mr. John Williams at Shadowstats.com.

6. A Comparison of Fed Assets with the Performance of Gold and the S&P 500.

The chart below is by Mr. James Turk, as shown on kingworldnews.com, and shows the energy that is being provided by the US FED (by way of money printing), benefiting both the S&P (red line), and gold (black line). 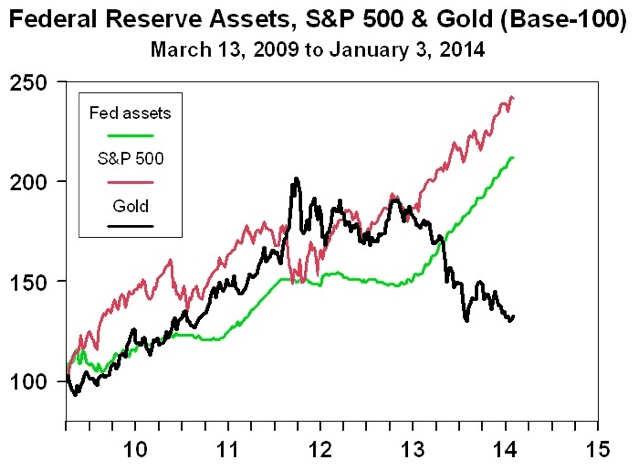 The gold price was pushed out of this relationship when huge numbers of contracts for paper gold, representing 15% of total world gold production, were executed at the COMEX in mid-April 2013…Meanwhile, to fill demand from China, hundreds of tonnes of physical gold were released by the Bank of England, while a large amount of gold was pried away from GLD the gold ETF, in  response to rising demand from Asian countries…This has created a situation where, like a rubber band, the gold price is expected to snap back into the previous alignment, (unless you expect the FED to stop printing money).

Price broke out at the 200DMA (red line) in February and since meeting with resistance at $1400, a test of the breakout has been underway. 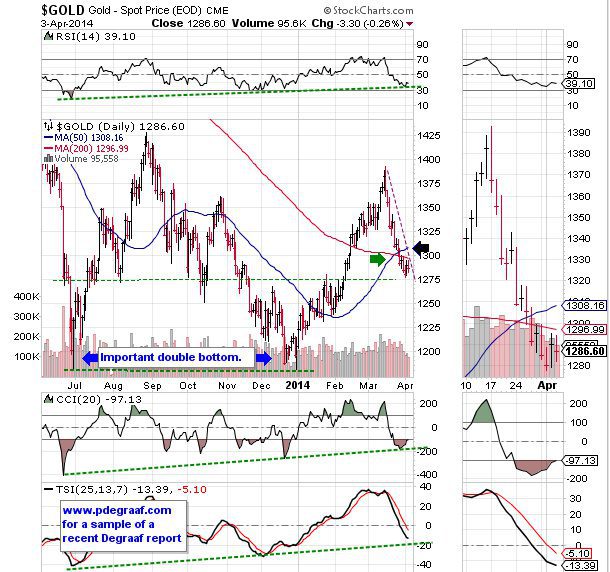 The supporting indicators (green lines), are providing hints that support is available here.  A breakout at the black arrow will tell us that a bottom may well have been carved out.  The green arrow points to a ‘golden cross’, with the 50DMA moving into positive alignment with the 200DMA.

In late 2011 this index became temporarily tilted in favor of gold.   The reversal of direction that came about as gold dropped in price while the S&P 500 rose to new highs, appears to be ready to change direction again. 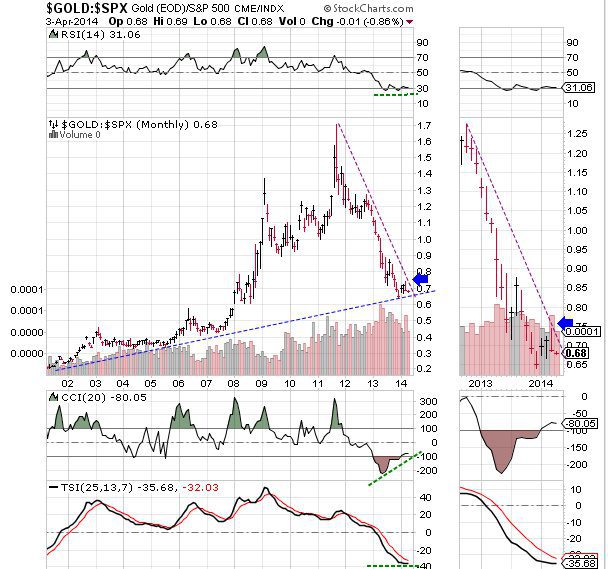 Confirmation will come about when price breaks out at the blue arrow.  The three supporting indicators (green lines) are ready to turn up. (The above and following charts are courtesy Stockcharts.com unless indicated otherwise.)

9. A Comparison of the Price of Gold to the US Long Bond

The blue line in the chart below depicts the 400 week moving average.  Up until 2003 it made sense to own bonds and not gold.  The green arrow points to the moment when gold took charge.  Since then gold has outperformed bonds. In 2011 gold had moved up a bit ‘too far too fast’ and a pullback in the relationship caused this index to return to the 400WMA, where it is finding support. 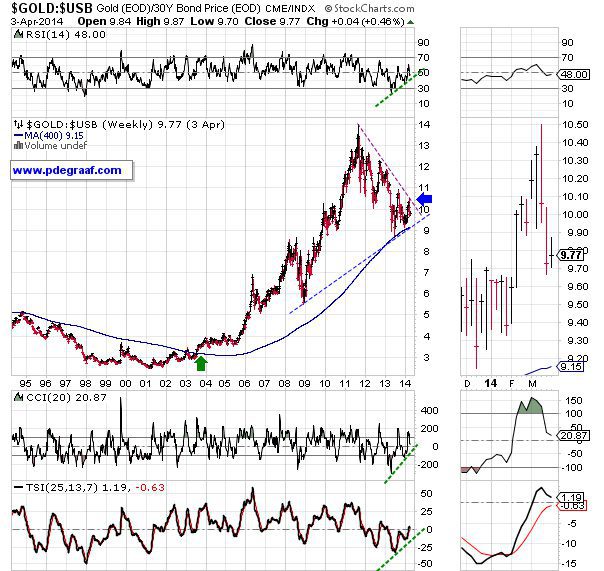 A breakout at the blue arrow will cause many people to become interested in gold, and bond money is expected to flow into the gold sector, as the eleven year old trend picks up steam.

*http://www.pdegraaf.com/archive.html (©2013 Peter Degraaf Investments, All rights reserved. Go here for a sample copy of his daily (subscription) market letter.DISCLAIMER:  Please do your own due diligence.  Peter Degraaf is not responsible for your investment decisions.

1. These 10 Charts Suggest the Outlook for Gold Is Good for 2014 and Beyond

3. The Future Price of Gold and the 2% Factor

Share
Previous Noonan: Gold Remains Low For These Compelling Reasons (+2K Views)
Next Gold is Being Supported By 19 Pillars of Sand & the Tide is Coming In! (+2K Views)

5 Articles On Gold or Silver That You Might Have Missed 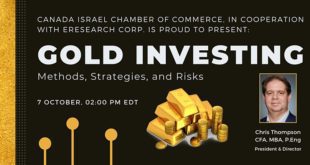 Gold: Today’s Boring Action Looks Like the Calm Before the Storm