The following 7 gold ratio charts show you what to look for in regards to seeing confirmation that a new bull market is truly underway. [Keep in mind that] correlations are never perfect but it is the general trend we want to focus in on…[and this article helps one focus on doing just that].

(Please note: Lorimer Wilson, editor of munKNEE.com (Your KEY To Making Money!), has edited* ([ ]) and abridged (…) the original article here for clarity and brevity to ensure a fast & easy read. Also note that this complete paragraph must be included in any re-posting to avoid copyright infringement.)

…[Looking at a variety of] ratio charts…is like putting the pieces of a puzzle together where the small pieces don’t look like much by themselves but when they’re all added together it paints a clear picture. These ratio combo charts are just a piece of the puzzle that may add some clarity to some of the individual sectors.

…Are we in an inflationary or deflationary cycle?…I use the TIP:TLC ratio chart for the inflation/deflation debate. When the ratio in black is rising it shows signs of inflation and when it’s falling deflation becomes possible. (Also at the bottom of the chart the GDX and the CRB index have been added with the 30 week ema.) 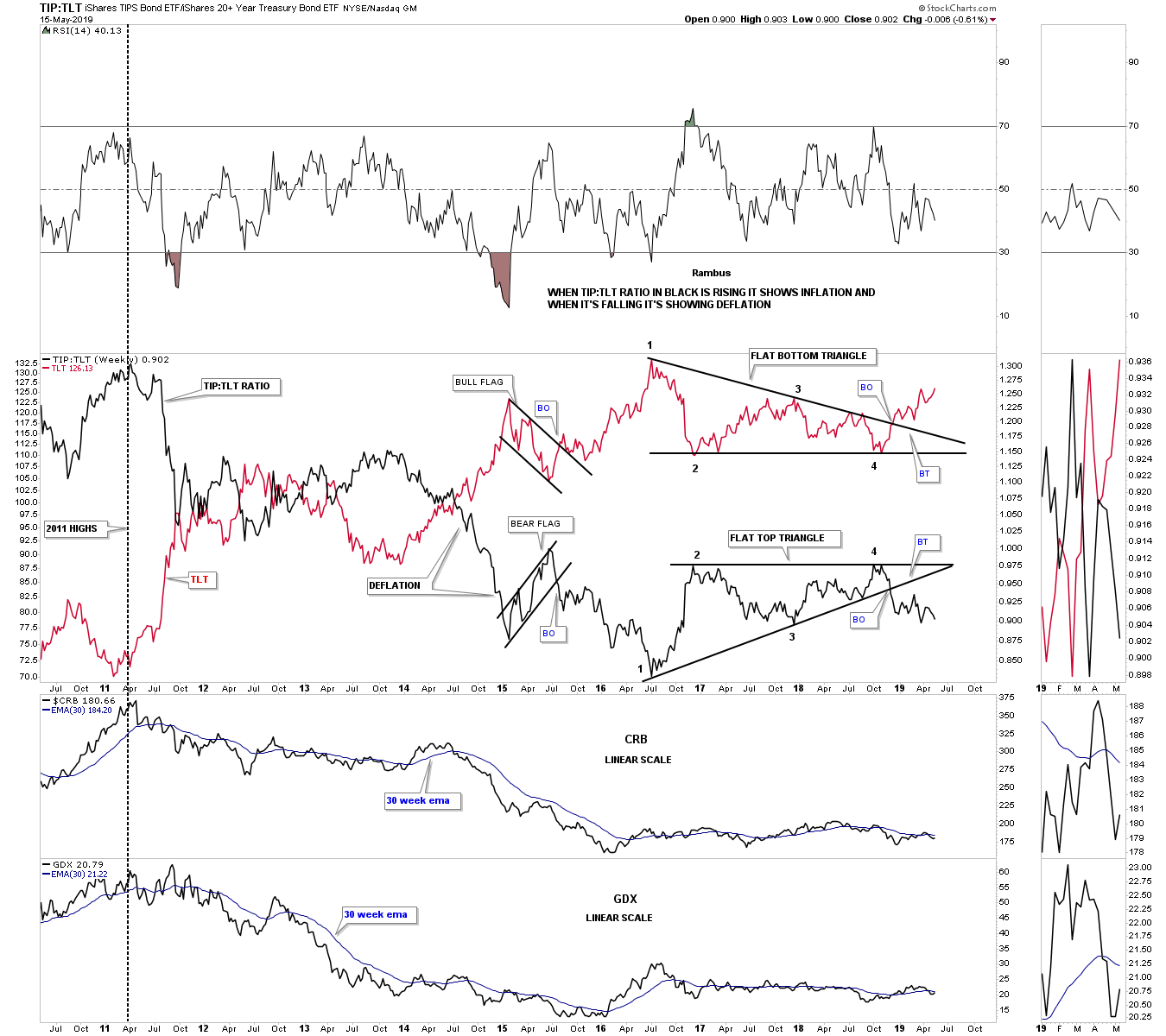 The bottom line is that as long as the ratio in black keeps falling the odds favor a possible deflationary event maybe in the cards in the future.

This next ratio combo chart has the TLT:GLD ratio on top with GLD on the bottom…When the ratio chart on top is rising it generally means GLD is falling. 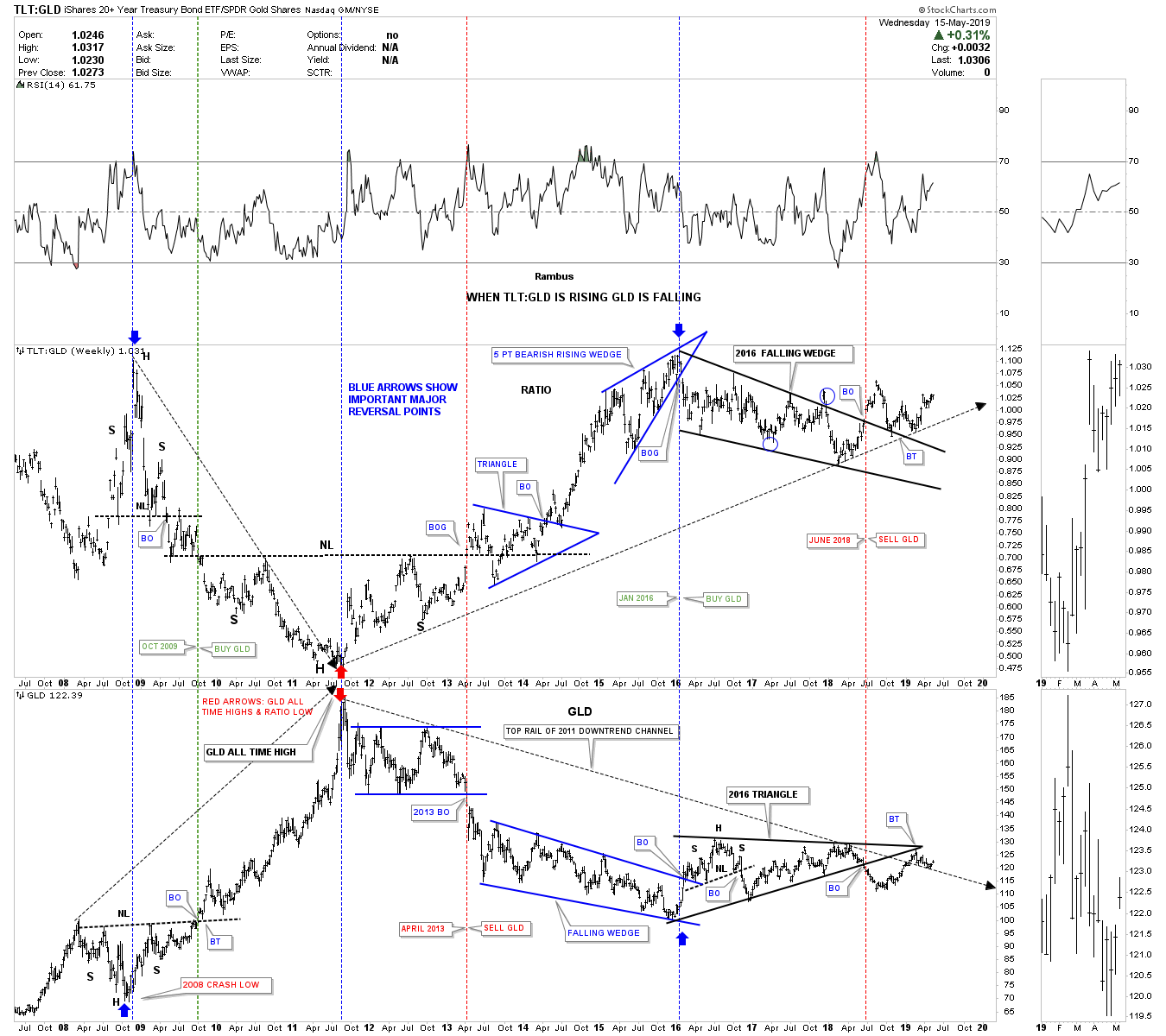 …The 2016 bearish rising wedge led to the rally phase in GLD when the bottom rail was broken to the downside. That was one of our clues to get long the PM stocks back in January of 2016 which ended up being a short lived buy signal of only eight months, no big trend change. 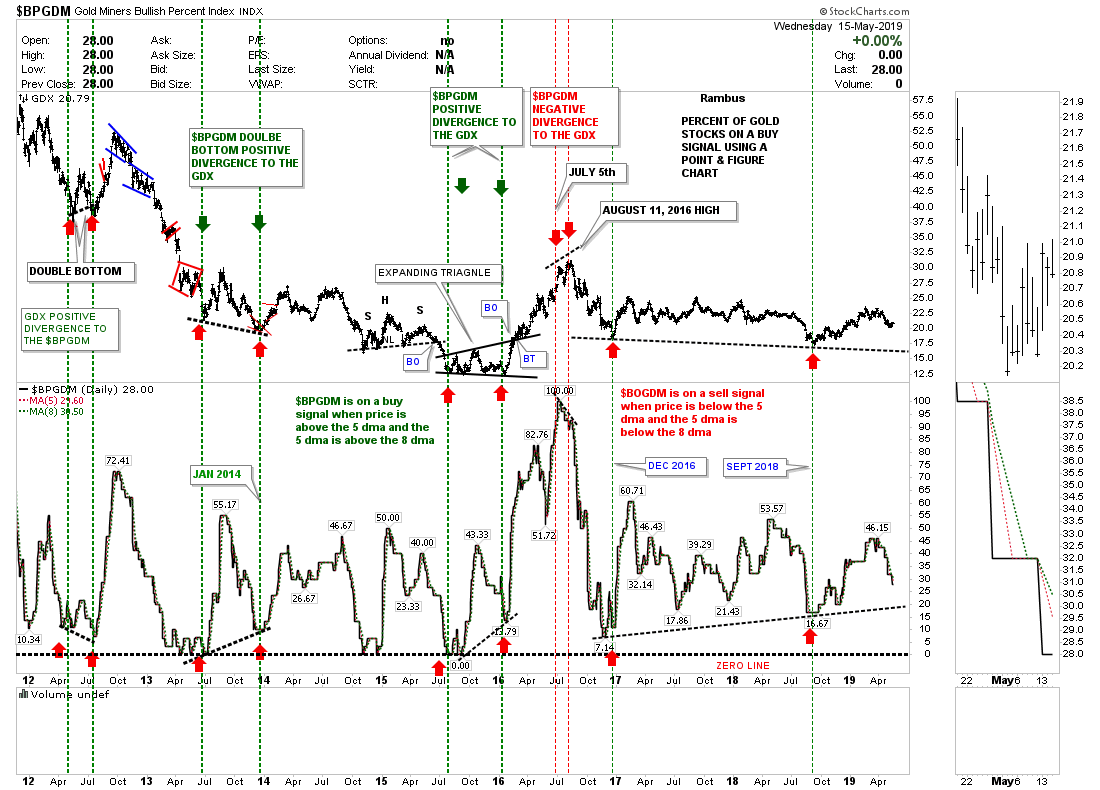 This next ratio combo chart…has the GOLD:XAU ratio on top with the XAU on the bottom… 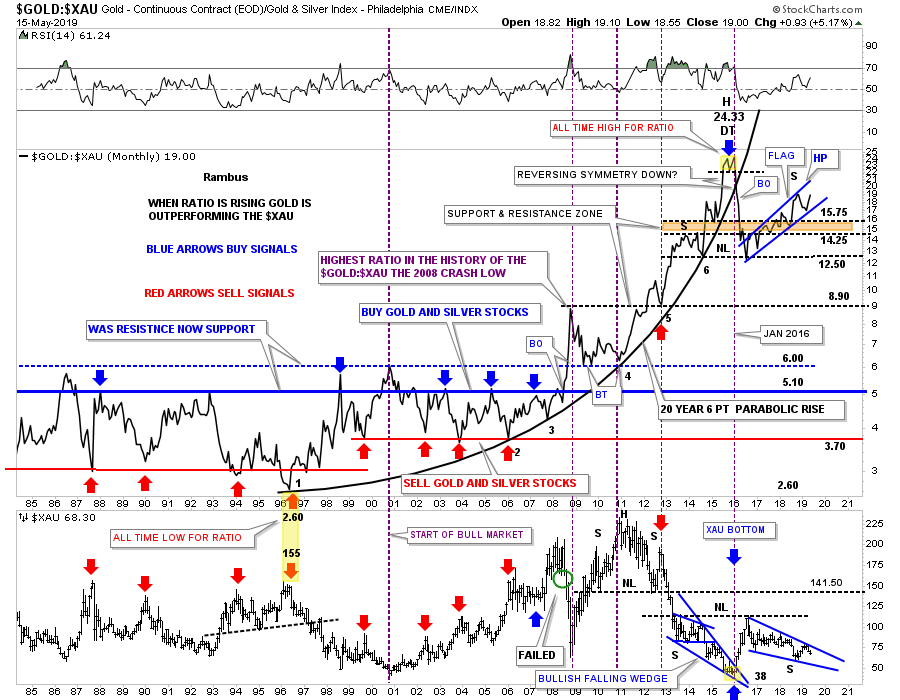 Instead of building out a H&S top the ratio has been building out the blue rising flag formation which is not what the PM bulls want to see. That in turn is causing the XAU to decline in its 2016 falling wedge formation. The bottom line is that a break below the bottom rail on the ratio chart on top, would be very constructive for the XAU and PM stocks in general. Until then the better part of valor is to stay on the sidelines.

Below is a shorter term weekly combo chart for the combo ratio chart above which brings into focus the last six years or so of price action. Again, what we want to see is for the ratio chart on top to break below the bottom rail of its rising flag formation which in turn will cause the XAU to rally. 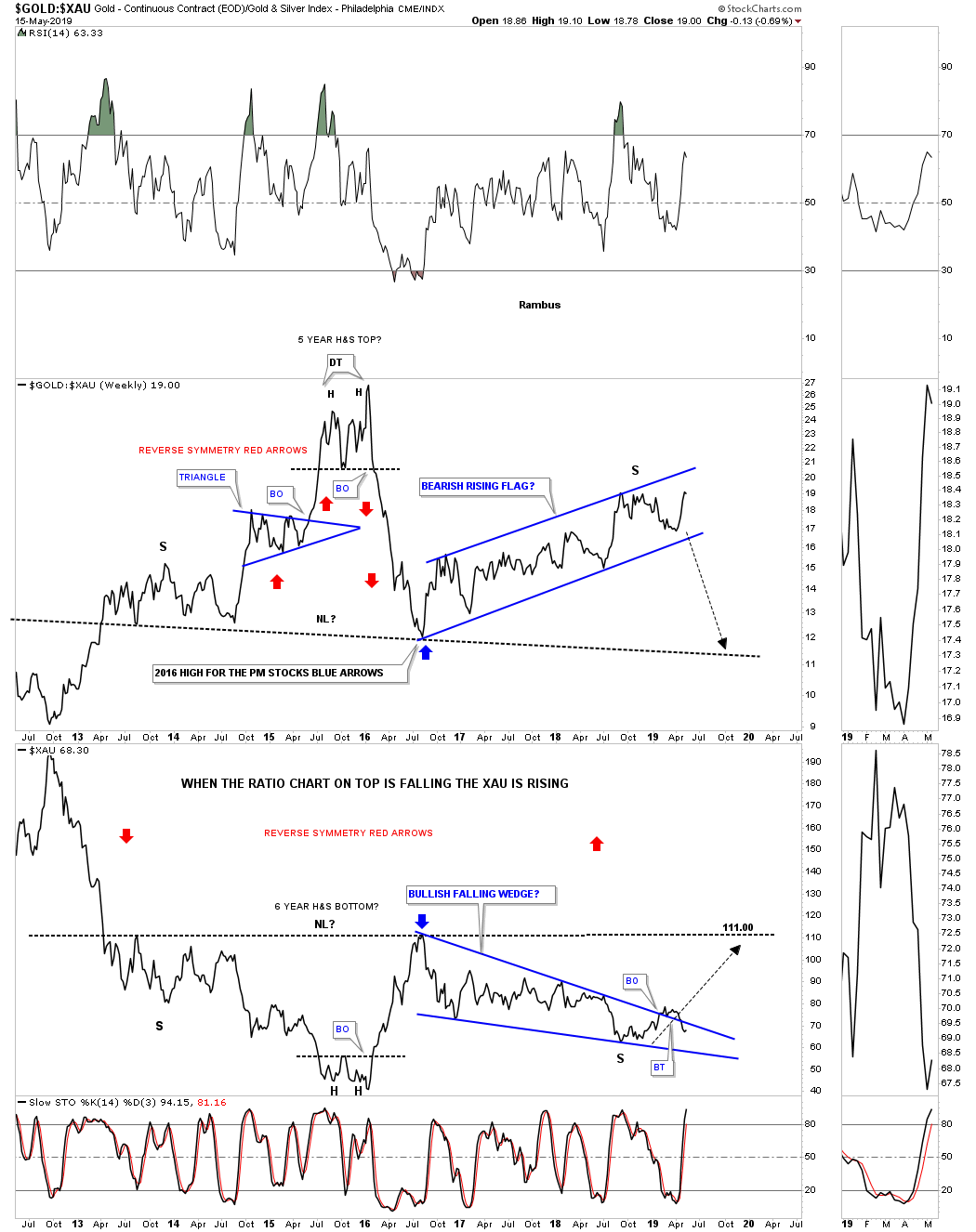 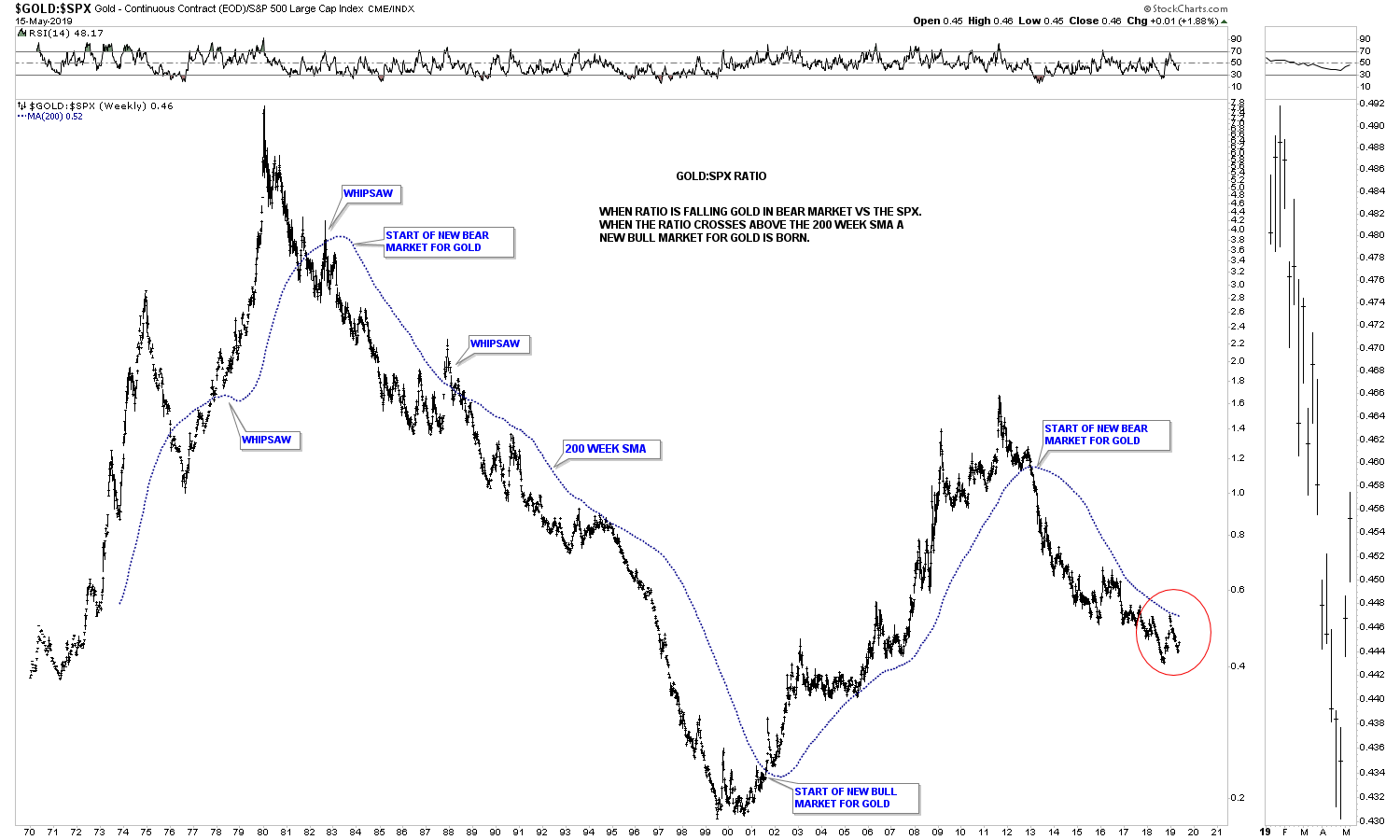 Below is just a 15 year weekly chart for the GOLD:SPX ratio along with its 200 week sma, which shows just one sell signal for gold vs the SPX in 2013. Earlier this year the ratio made it almost all the way up to the 200 week sma but turned down before breaking out. A breakout above the 200 week sma would be a very bullish development for gold and the PM complex in general. 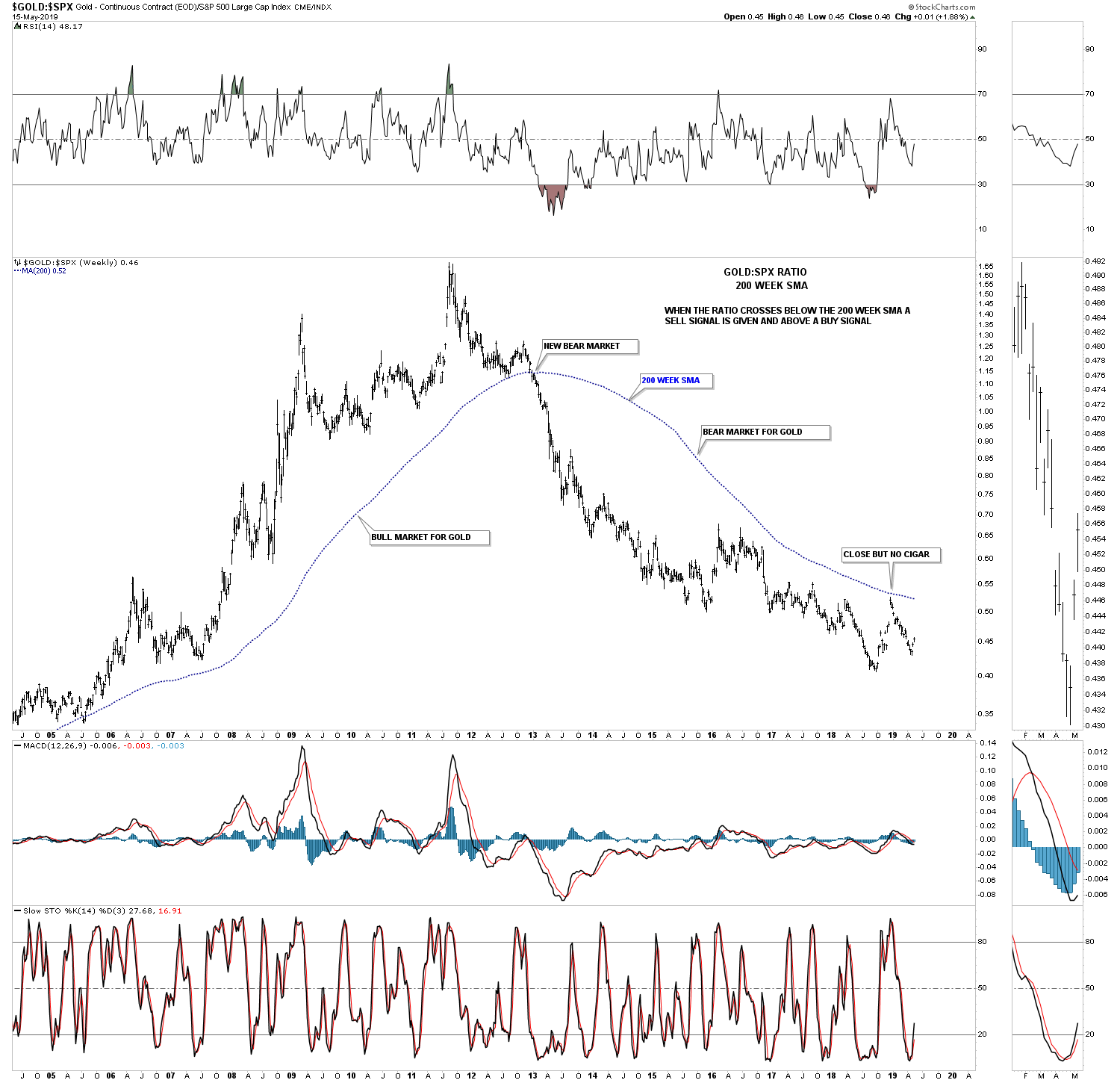 …The charts above show you what to look for in regards to seeing confirmation that a new bull market in PM complex is truly underway.