2020 was a milestone in the sordid history of the long-running U.S. trade deficits. As the rest of the world cut back on buying U.S. goods, U.S. consumers were doused with government money, and they switched from buying services — from haircuts to plane tickets — to buying goods, a large portion of which was imported.

99.9% of the articles posted on munKNEE.com are either original articles written by its editor or articles from other sites that have been edited and abridged for the sake of brevity and/or clarity to provide a fast and easy read. The following article by Wolf Richter of WOLF STREET, however, needs no improvement and, as such, is posted below in its entirety as originally published.

Half of the decline of imports was driven by an $80 billion or 38% plunge in imports of petroleum and petroleum products, to $127 billion, the lowest since 2002, caused by the collapse in crude oil prices, the collapse in demand, and US production from fracking. Combined with US exports of petroleum and petroleum products, it produced the first annual US petroleum trade surplus ($18 billion) on record, according to data by the Commerce Department. 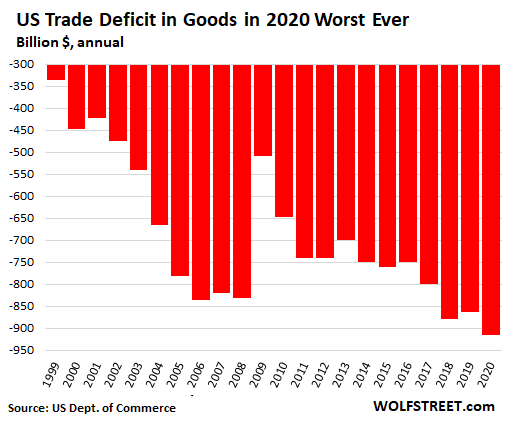 US exports to the rest of the world add to GDP, and US imports are a negative for GDP. Every country wants to export itself out of trouble. And the US has been eager to make this possible for other countries – driven largely by Corporate America’s three-decade binge to globalize its supply chains to fatten up its profit margins. 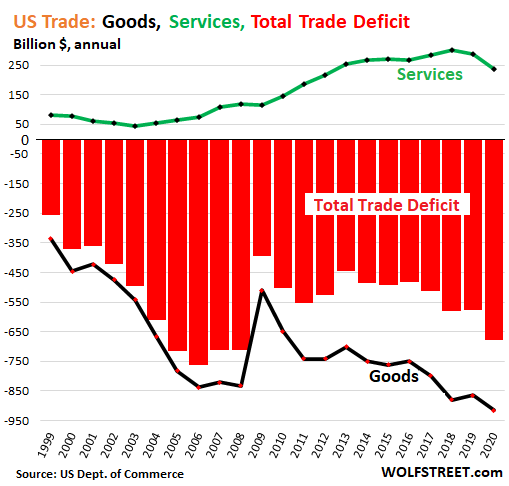 The Goods Trade Deficit, by Country.

Below are the 14 countries plus the European Union (yellow bar) with which the US has the largest trade deficits in goods. The opaque nature of international trade transactions, such as trans-shipments, trade invoicing via third countries, tax dodging, etc., can produce peculiar results, particularly with small countries such as Switzerland and Ireland, as you can see below. Compared to 2019, the trade deficit:

Imports and Exports of Goods, by Country. 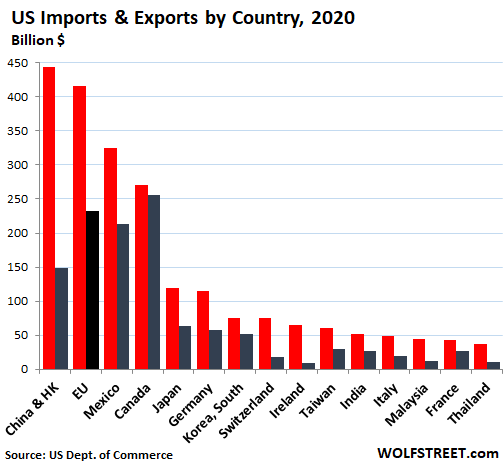 Imports from China and Hong Kong combined fell by 2.8% in 2020 to $443 billion, the second year in a row of declines (red columns below). Some of the imports have been rerouted via Vietnam and other countries. Nevertheless, that’s a big improvement.

The goods trade deficit (exports minus imports) with China and Hong Kong improved, or rather became a little less horrifically terrible, for the second year in a row. And at $295 billion, it was the least terrible trade deficit since 2013 (black line): 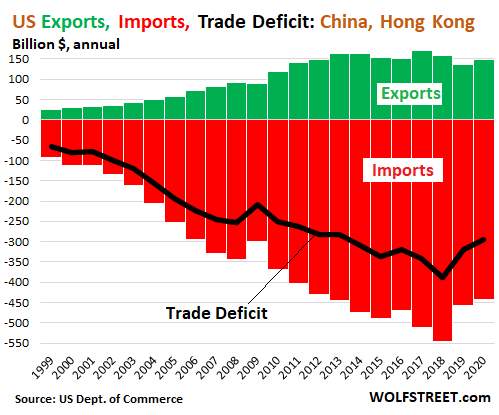 The year 2020 was a milestone in the sordid history of the long-running US trade deficits in that the goods trade deficit set a new historic most terrible record, despite a 38% collapse in imports of petroleum and petroleum products, and despite the first-ever petroleum trade surplus. As the rest of the world cut back on buying US goods, US consumers were doused with government money, and they switched from buying services — from haircuts to plane tickets — to buying goods, a large portion of which was imported.

Share
Previous Coming Inflationary Depression To Result In $20K to $25K Gold! (+2K Views)
Next Deploy This Exit System To Make Sure You’ve Sold Out Before the Bubble Bursts