Today’s Gold Price Is An Absolute Bargain – Here’s Why

…The fall of fiat money started in earnest in 1971 when Nixon closed the gold window…[and has been exacerbated by the exponential] growth in global debt since then {see table below]. This final stage of the fiat money system was first evidenced by gold turning up at the beginning of this century.

…U.S. debt has, on average, doubled every 8 years since Reagan rose to power in 1981…When Trump was elected president in November 2016, I forecast that after the first 4 years the debt would be $28t and 8 years after Trump’s victory, the debt would double from $20t to $40t…Currently the debt is $26.750t and an increase by $1.25t to at least $28t by the time the new president enters office in January 2021 seems very likely to fulfill my forecast. 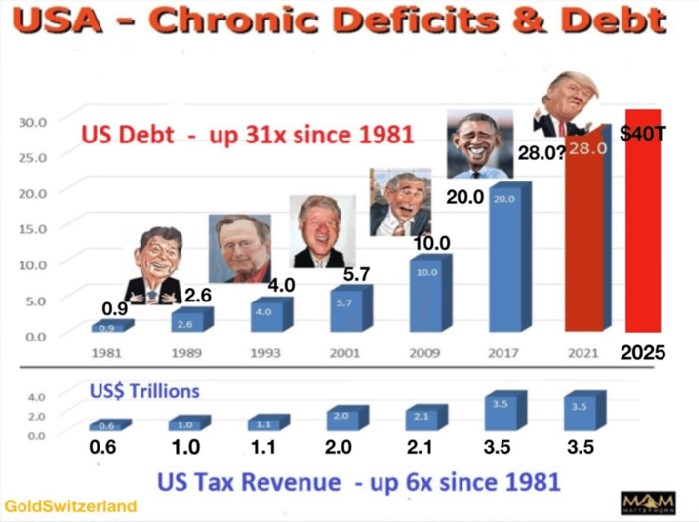 As the graph above shows, tax revenue has increased 6x since 1981 whilst the debt has gone up 31x so…[the U.S.] has been running a real budget deficit virtually every year since 1930 and can only increase taxes at a fraction of the rate of the deficit growth. How can anyone believe that the U.S. economy, with the real deficit going up every year for 90 years, has a chance of survival. 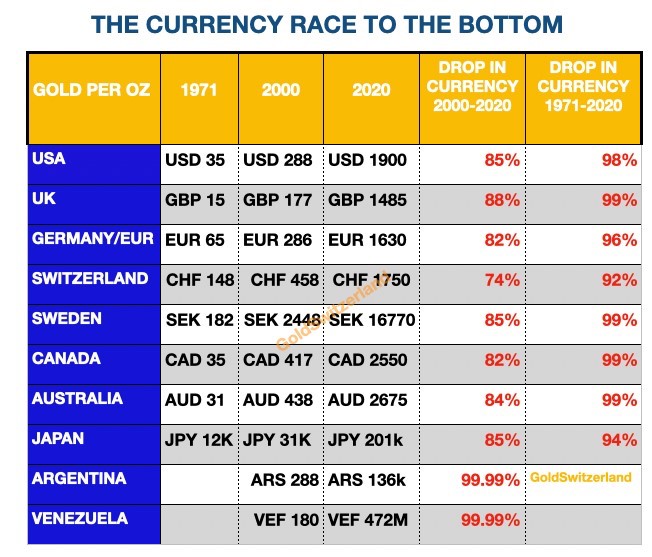 The petrodollar and a strong military has so far prevented the dollar from total destruction…[but] a 98% loss of value since 1971 is as near annihilation as you can get, and the dollar has now started its final journey to ZERO. It has only got 2% to go, measured form 1971 but we must remember that the 2% means a 100% fall from now…

The demise of the petrodollar could also be accelerated by massive improvements in battery technology [such as] the revolutionary Quantum Glass Battery, invented by the Nobel Prize winner, John Goodenough…[that] is capable of storing considerable more energy than the lithium-ion battery and can be charged in a fraction of the time…As the Quantum Glass Battery comes into production it will…put an end to piston engines as well as the petrodollar. It will also fatally wound the oil industry. In the U.S. for example, 70% of all oil consumed is used for transportation.

Increase In Price Of Gold

The 98% decline in currencies since 1971 and +80% decline since 2000 are measured, in real terms, by gold… The U.S. government can try to fool the people with the so-called strong dollar policy but gold stands as the guardian of the truth and reveals governments’ deceitful actions…

Gold at $1,970 today is clearly an absolute bargain.

Editor’s Note:  The original article by Egon von Greyerz has been edited ([ ]) and abridged (…) above for the sake of clarity and brevity to ensure a fast and easy read.  The author’s views and conclusions are unaltered and no personal comments have been included to maintain the integrity of the original article.  Furthermore, the views, conclusions and any recommendations offered in this article are not to be construed as an endorsement of such by the editor. Also note that this complete paragraph must be included in any re-posting to avoid copyright infringement.

Share
Previous Inflation – Defined Correctly – Shows the “True” Picture
Next There Are 11 Stages of Economic Collapse – Where Are We Now? (+5K Views)