The original article has been edited here for length (…) and clarity ([ ]) by munKNEE.com to provide a fast & easy read.

Let’s play a guessing game. I’ll give you an economic and market scenario, and you tell me if gold would rise or fall in that environment. Here’s the scenario:

…Would gold rise or fall in that set of circumstances? Surely you’d guess the price would be weak, if not fall substantially. It’s the exact opposite environment for gold to do well. Indeed, there are plenty of examples from history where gold performed poorly in circumstances similar to these but, with all that going on last year, the gold price ROSE! It climbed 12.1% in 2017, despite the many obvious headwinds.

Why was gold up in the midst of all the positive economic indicators and giddy investment markets?

This behavior is not one of confidence in markets or central bankers, but a sign of just the opposite. It says that investors are preparing for a reversal in the good fortunes outlined above—and for a decisive bull market in gold. Given the multiple financial risks that surround us, it won’t take much to tip sentiment back to gold. By the end of this year we think that’s exactly what happens.

2. The Everything Bubble Is Coming to an End

Mike Maloney shows in his excellent new video that stocks, bonds, and real estate—the primary investment assets of most North Americans—are all in bubbles and he believes those bubbles are likely to pop this year. In just a couple of examples from Mike’s video, he shows that:

Remember, no trend lasts forever. Since gold is inversely correlated to most major asset classes, it is more likely to rise when stock markets crash…

3. The Technical Picture Shows Gold Coiling for a Big Breakout

There’s an interesting development in the technical charts for gold, one that says a big move is on the way.

I turned to expert Dominick Graziano for an update on gold’s technical picture. He is a trader extraordinaire, and over the past several decades has amassed a seven-figure brokerage account from his technical trading. He is well worth paying attention to.

Since gold has been trading largely range-bound for several years now, I asked him what this may imply. Here’s his chart of gold’s monthly price, and note his comments. 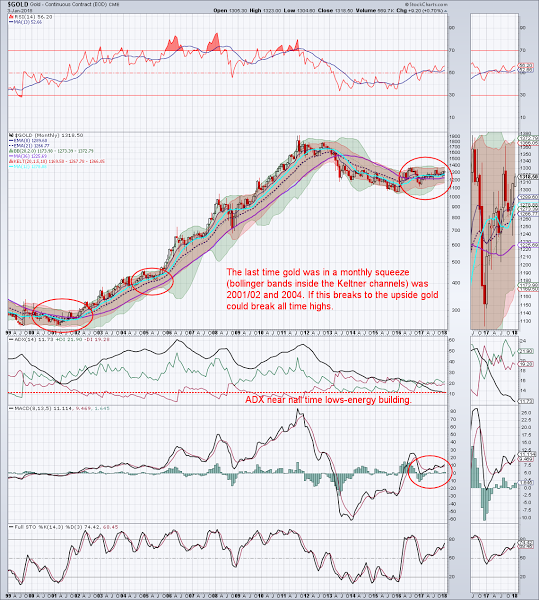 The gold price continues to squeeze tighter and tighter on a monthly basis, a technical sign that implies a breakout is coming. The ADX (Average Directional Index) measures the strength or weakness of a trend, and you can see that gold isn’t trending but instead is building energy. The longer this consolidation goes on, and the greater the buildup in energy, the bigger the breakout will be. In fact, Dominick told me that “long-term consolidations are the most powerful when they finally break out.”

The technical picture doesn’t tell us when this breakout will occur, but as he says a new all-time high could be in the cards if it breaks to the upside. You’ll notice other technical indicators give bullish indications, too.

The point here is that we’re inching closer and closer to a major move in the gold market and you’ll want to be positioned beforehand to take full advantage. That’s what we’re doing—continuing to buy physical metal now in preparation of a major shift in the markets.

When Will Gold Begin Its Surge?

I’m frequently asked how much longer we’ll have to watch stocks and cryptos soar before our time comes. I can’t pinpoint the day, but I can tell you when:

The next event that causes financial instability will likely be the spark that pushes gold out of its current range and kick-starts the next surge.

Our job as investors and protectors of family wealth is to prepare for that shift and the best way to do that is to worry a little less about the price and a little more about how many ounces we own and if they will be sufficient for the next crisis.

2. Gold: 8-yr Cycle About To Start – Next 5 Years Will Likely Be Good Ones

For those who believe in cycles, the timing is perfect for a strong run up in gold. Here’s why.

Gold just entered a new bull market but the price of gold has failed to garner any meaningful rally so, what gives? Why haven’t gold prices rallied? Well, it’s just a matter of time.

4. Your Portfolio Should Have 2-9% Physical Gold In It – Here’s Why

Because investment professionals are generally well informed, competing in an industry in which performance is king, one would assume any asset class deserving of rightful consideration would enjoy a fair hearing so it begs the question “Why Doesn’t Gold Get The Respect It Deserves?”

5. Dow-to-Gold Ratio Says Gold Prices Could Be Headed Much Higher

When trying to assess gold prices, it’s critical for investors to pay close attention to the Dow-to-gold ratio. At its core, the ratio says how many ounces of gold it would take to buy one share of the Dow Jones Industrial Average. It’s a powerful ratio when valuing gold prices and it isn’t talked about much in the mainstream.

6. This Evidence Strongly Suggests 2018 Will See the Beginning Of A New Commodity Bull

The evidence is increasingly pointing to this potentially being a secular bottom in commodities and energy stocks in particular. In fact, we think 2018 will be the year of the commodity bull. Below is the evidence to support this forecast.

7. Get Positioned: Gold Has Bottomed & Should Rally Over 10% In January/February

Each of the last three years have begun with gold rallies of over 10%. The stage is set for another such move in 2018. Are you prepared?

8. Explosion To the Upside Coming In the Dollar Price Of Gold – Here’s Why

There are many compelling reasons why gold should outperform over the coming months.

9. Now’s the Time To Diversify Into Physical Gold – Here’s Why & How

The time is now to diversify into gold. All markets cycle, and a down-cycle for stocks and an upcycle for precious metals is on the doorstep. Take some of your profits and buy some undervalued gold.

Share
Previous This Simple Indicator Suggests S&P 500 Still Far From A Bubble
Next Dogs of the Dow: A Simple Strategy Using the Dividend Yield