in the wake of the debacle of the recent G-7 meeting in Quebec. Above all else, what rankles Canadians the most is the total mischaracterization of the trade relationship and the complete denial by the Trump Administration as to the facts of the bilateral relationship. Let’s look at the overall situation and then some specific sectors that have been singled out in the cross-border trade disputes.

Figure 1 below depicts the major segments of the trade balances. The United States over the past 3 years has enjoyed a surplus on total trade with Canada. Much to the chagrin of Canadian trade officials is the total lack of acknowledgement by the Trump Administration of the growing surplus in traded services. When Canadians travel to the United States, either for business or personal reasons, it is counted as an U.S. ‘export’. Similarly, commissions and fees charged to Canadians in the purchase of U.S. financial assets or real estate are also considered as U.S. exports. US. export of services has been the fastest growing sector among all tradeable goods and services. The strength from the trade surplus in services puts the overall trade balance in favor of the United States. 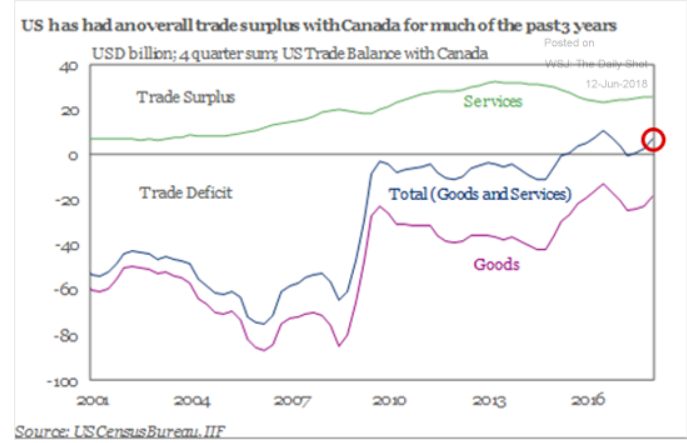 When we examine the major sectors, we find that the United States does, on balance, enjoy a small surplus, but a surplus nevertheless. To avoid any accusations concerning bias, I have employed data provided by Office of the United States Trade Representative, Executive Office of the President for 2017. (Figure 2). Canada maintained a small surplus on goods, largely a reflection of the U.S. imports of oil, mineral and forest products. Within the goods sectors, the net balances registered hardly constitute a claim that Canada has ‘taken advantage’ of the United States, a phrase so often used by the Trump Administration. 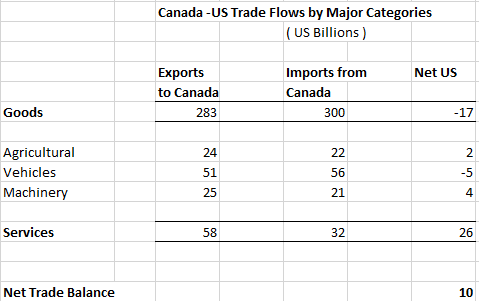 …Who will benefit from a trade war with Canada? Given that bilateral agricultural trade involves so many products in various stages of processing, a tariff war would be ruinous for farmers on both sides of the border. The very same conclusion applies to the automotive sector with its highly complex supply chains.

Canadians are flabbergasted that Trump advisers speak of the imperative for the United States to ”upset the existing world order”. Canada, as the essential U.S. trade partner, is definitely part of the existing word order that the Trump Administration wants to destroy. Much to Trump’s displeasure Canada is not about to acquiesce to U.S. demands to undo a half century of successful trade relations.

Scroll to very bottom of page & add your comments on this article. We want to share what you have to say!
Related Articles From the munKNEE Vault:

It continues to be baffling beyond words how Canada has ended up being among the Trump administration’s “most wanted” trade villains. In a client note, Doug Porter, the chief economist at the Bank of Montreal, set aside his usual analysis for a “rant” that pretty much demolished the argument that Canada is the trade villain Trump makes us out to be.

2. U.S Goods Canadians Can Boycott During the Canada-U.S. Trade War

In light of the widening trade war between Canada and the United States—and Donald Trump’s broadsides against this country’s political leadership—we’ve compiled a list of products you can support at the expense of their American counterparts.
Support our work: like us on Facebook, follow us on Twitter, or share this article with a friend. munKNEE.com – Voted the internet’s “most unique” financial site! (Here’s why)
Share
Previous These 5 Financial Articles Deserve Your Attention
Next How Early & Deferred Social Security Retirement Benefits Affect Monthly Payment Amounts