There is a massive demand for plant-based foods across North America and that is benefiting constituent companies in the munKNEE Pure-Play Plant-Based Food Stocks Index which has just added the Plant&Company Brands Inc. (VGANF) to the Index.

The Growth of the Plant-Based Foods Market

The Road to Prominence For Plant&Company

Given that plant-based foods and other products have become such an important part of health and wellness lifestyle choices in North America EuroLife Brands expressed plans to expand the scope of its target markets to include North America, and specifically Canada, in the near term and, to that end,

As illustrated in the chart below the “three cornered” amalgamation agreement between Plant&Co., Plant & Company Group Brands Group Inc. and Holy Crap Brands Inc. back on November 25, 2020, was the spark that lit up VEGN.CA’s stock price and the purchase of YamChops has only added to its 100% stock increase over the past 2 months. The stock was recently listed on the OTC exchange with the symbol VGANF but it is not yet available from StockCharts so the Canadian chart below will have to do for the time being. The chart below is in Canadian dollars, so go here to convert prices to another currency if desired. 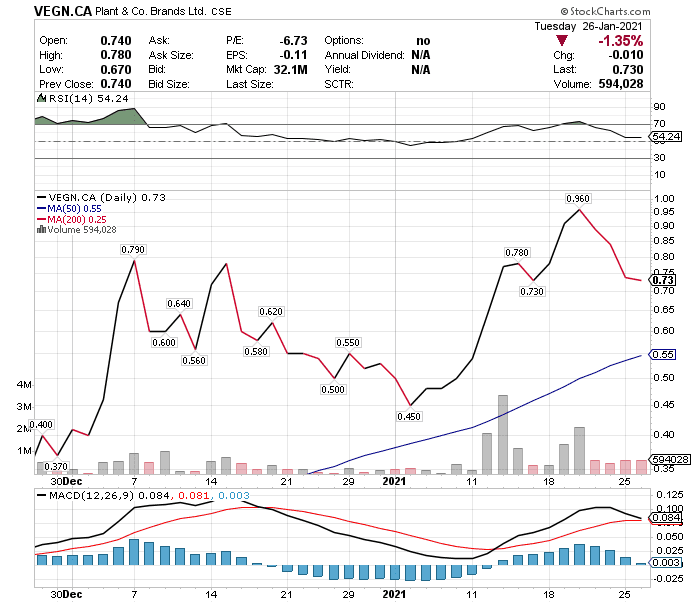 As always, please keep in mind that stocks that trade for less than $1/share (i.e. are penny stocks) are susceptible to manipulation by unscrupulous speculators and, therefore, it is incumbent upon you to do your own own due diligence before investing in the sector.

Lorimer Wilson is an economic & financial commentator who wrights articles on economics, finance, precious metals, and the cannabis, psychedelic and plant-based food stock sectors. He is the Managing Editor of munKNEE.com, a site that provides a selection of the internet’s best finance articles in an edited, reformatted and abridged format to ensure a fast and easy read.

munKNEE.com has joined eResearch.com to provide you with individual company research articles and specific stock recommendations in addition to munKNEE’s more general informative articles on the economy, the markets, and gold, silver, psychedelic drug stock and cannabis investing.
Check out eResearch. If you like what you see then…