NOW Is An Opportunistic Time To Own Gold, Silver and its Miners!

If there was ever a time to own tangible assets and businesses that benefit from the appreciation of these underlying assets, that time would be now. We are currently experiencing profound changes in the global economy powered by decades of easy money policies and record levels of debt-to-GDP among developed economies and they are likely to unleash a plethora of early-stage secular trends in a new inflationary regime setting the stage for significant changes in portfolio allocations from crowded and overvalued assets to unloved and historically cheap alternatives. For macro investors, we think this is one of the most opportunistic times ever. [Below are]…our detailed views about the global economy.

This version of the original article by Crescat Capital (crescat.net) has been edited [ ] and abridged (…) by 77.5% (from 3770 words down to 848 words) to provide you with a faster and easier read. Also note that this complete paragraph must be included in any re-posting to avoid copyright infringement.

Ultimately, the sustainability of commodity bull markets is predicated on the spending trends for natural resource industries and, by and large, these are long-term cycles that take time to reverse. Years of misallocation of capital, equity dilution, corporate mismanagement and money-losing operations have now turned into excessive conservatism. When adjusted for GDP levels, the aggregate capex for commodity producers remains lower than it was in 2003, almost 20 years ago.

While these commodity producers have turned into incredibly profitable businesses, they have yet to become new darlings for investors.

Commodity producers remain so financially restrained to invest in their businesses that they are almost giving more capital back to shareholders than what they spend on CAPEX. In the last year, nearly 30% of the cash flow from operations generated by these companies was spent on dividends and share buybacks.

The chart below reflects how natural resource industries are more focused on attracting investors by these shareholder friendly actions than through trying to grow their businesses. This is a classic sign of a commodities cycle in its early innings.

How can anyone claim commodities are overextended when prices relative to overall equity markets remain near 50-year lows? Every time we reach such suppressed levels in this ratio it marked the beginning of commodities cycles.

…We think that gold and silver miners, more than any other natural resource industry, are overdue for a major catch-up with their peers.

Precious metals mining companies are not only the most profitable they have ever been in history, but they also have the strongest operating margins among all other commodity producers. That is despite the recent increase in energy prices and surge in labor costs.

Silver remains one of the most mispriced opportunities in financial markets today. While the overall commodities market has drastically risen, this high-beta version of gold remains at historically cheap levels. If silver were to just catch up to the move in other tangible assets, it would imply a doubling from current levels.

Gold Price On the Rise

…After many years of strong positive correlation with fixed income securities, gold is now rising despite the historic rout in global bonds…Outflows from fixed income markets are likely to become inflows for tangible assets like gold. 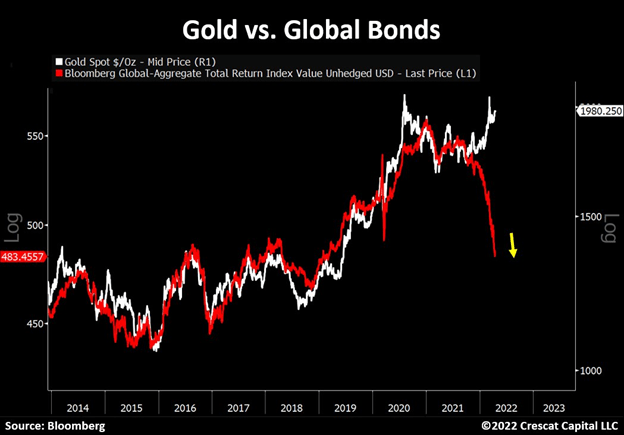 Precious metals companies have been performing incredibly well recently despite the significant rise in US Treasury yields. Remarkably, the mining industry has underperformed gold prices for over 26 years. With rising profitability, balance sheet improvements, extreme capital spending conservatism by corporate management, there is so much value still to be unlocked in this industry.

Contrary to today’s conventional wisdom, note how gold miners increased 5-fold while the stock market declined 50% during the 1973-74 inflationary recession. We think a similar development will follow in the next economic downturn.

…U.S. stocks in gold terms are just as expensive as they were at the 1929 peak prior to the Great Depression. 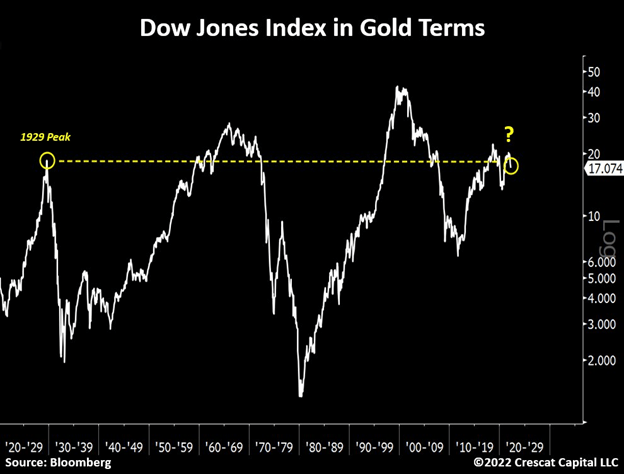 We believe S&P 500-to-gold miners ratio is headed lower from here. The macro and fundamental case for owning precious metals companies vs. overall equities has never been more attractive.

A Final Note on Gold

…Forward thinking investors today likely still have time to get ahead of the curve, but who knows exactly how much time? Soon enough, individual investors, institutions, and central banks themselves will be breaking from the Western sovereign debt and fiat cabal and grabbing for the gold. It has taken a long time to get here, but we believe we are finally on the precipice of the ultimate breakdown of the entire system. That does does not mean that we are facing the demise of the Western banking system nor the rise of authoritarian economies and their fiat currencies and doesn’t necessarily mean the rise of non-government backed intangible currencies either. Instead, the macro setup today portends a deleveraging of the global economy through inflation, including a probable step-function devaluation of all fiat currency systems relative to gold, a persistent phenomenon throughout world history.

Share
Previous Investing In Cryptocurrencies Via ETFs & Funds/Trusts Is Easy! Here Are 31 Ways
Next How A Russia-Initiated Nuclear War Would Likely Unfold