If there is a recession in the next one to two years, there is also likely to be another bear market for stocks…[and this article] shows why the base case for a new bear market could be a two year inflation-adjusted loss of 36%, which would exceed anything experienced in the 1960s, 1980s or 1990s.

…If history (on average) repeats itself, what should we expect with the next recession and bear market? A very simple and somewhat conservative approach is to take the smoothed average (“smoothed” because we are looking at annual to annual, instead of the worst case scenarios of highest daily high compared to lowest daily low) of the two previous stock market losses that we have experienced in these cycles of higher asset prices and high PE ratios.

On a simple basis then, this would imply that the base case scenario for the S&P 500 in the event of another recession would be about a 36% loss over about the two years or so after the peak year. 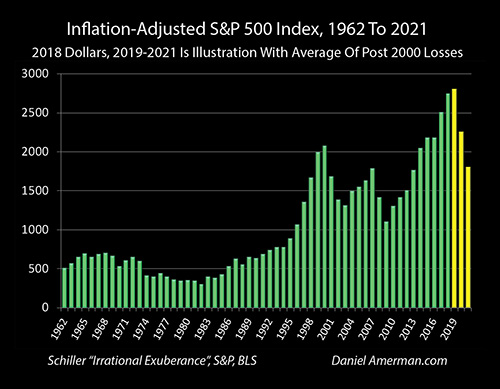 Editor’s Note:  The above excerpts from the original article by Daniel Amerman have been edited ([ ]) and abridged (…) for the sake of clarity and brevity.  The author’s views and conclusions are unaltered and no personal comments have been included to maintain the integrity of the original article.  Furthermore, the views, conclusions and any recommendations offered in this article are not to be construed as an endorsement of such by the editor. Also note that this complete paragraph must be included in any re-posting to avoid copyright infringement.

Share
Previous World Debt: Here’s A Simple Straightforward Look At Everything You Need To Know
Next Financial Bubbles: Don’t Fall Victim To the Hype Of “the next big thing”