The stock market has been on a tear lately and we all know by now that central banks are the main reason why stocks are going up. Money gets printed by the central banks which pushes liquidity into the system. That liquidity must go somewhere and we’ve seen that money go into stock buybacks. However, earnings have not risen on the rise of the stock market. Only the valuation multiples (P/E ratios) have gone up.

Valuations have gone up instead on the back of a lower misery index, as shown on the following chart from Yardeni. Forward P/E ratios are now at 18, which shows that stocks are fairly overvalued. You could justify this high valuation due to a low misery index. 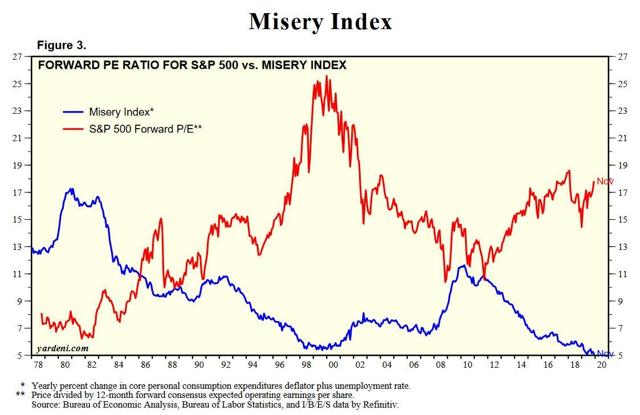 We have seen a significant decline in hirings versus separations… First, the hirings decline, then the non-farm payrolls will decline and finally, we will see a rise in the unemployment rate.

My favourite indicator here is the productivity index (see chart below from FRED). Real output has been declining since the 1990s and when productivity slows down, inflation starts to appear. The trade war isn’t helping either.

Another obvious reason for more inflation ahead of us is the increase in money supply from the central banks of Japan, the U.S., and the Eurozone (see chart below from FRED). All three central banks are projected to send billions of dollars into the system this year. 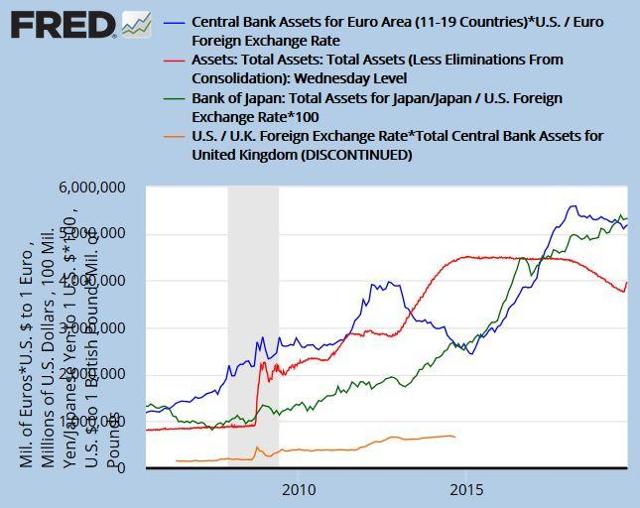 …John Taylor, a Stanford University economist once considered to lead the Federal Reserve, developed a formula to calculate where the Fed funds rate should hypothetically be according to:

Inflation became a problem during all times when the Taylor Rule Rate became higher than the Fed funds rate (see chart below from FRED). Today, the Taylor Rule Rate says that we should already be at 3% interest rates. Instead, the Fed funds rate is at 1.55% and chairman Powell has already said he won’t increase interest rates until he sees persistent inflation above the 2% level.

[The conclusion one can draw from the above analysis]… is that:

Enjoy the ecstasy created by the central banks while you can because once their support ends, the party is over.

Editor’s Note: The above excerpts are from the original article by Katchum, and have been re-formatted, color highlighted, edited ([ ])* and abridged (…) by Lorimer Wilson, editor of munKNEE.com – Your KEY To Making Money! – for the sake of clarity, and brevity to provide a fast and easy read.

*(The author’s views and conclusions are unaltered and no personal comments have been included to maintain the integrity of the original article. Furthermore, the views, conclusions and any recommendations offered in this article are not to be construed as an endorsement of such by the editor.)

Share
Previous How Much Gold Is Mined Each Year & What Countries Produce the Most? (+5K Views)
Next The U.S. Is Broke and No One Seems To Care