Each year, the Congressional Budget Office publishes a report presenting its budget projections for the next 30 years. Those extended baseline projections generally reflect current law. This report is the latest in the series.

Debt in CBO’s Extended Baseline Projections. Large budget deficits over the next 30 years are projected to drive federal debt held by the public to unprecedented levels – from 78 percent of gross domestic product (GDP) in 2019 to 144 percent by 2049. That projection incorporates CBO’s central estimates of various factors, such as productivity growth and interest rates on the federal debt. CBO’s analysis indicates that even if values for those factors differed from the agency’s projections, debt several decades from now would probably be much higher than it is today. 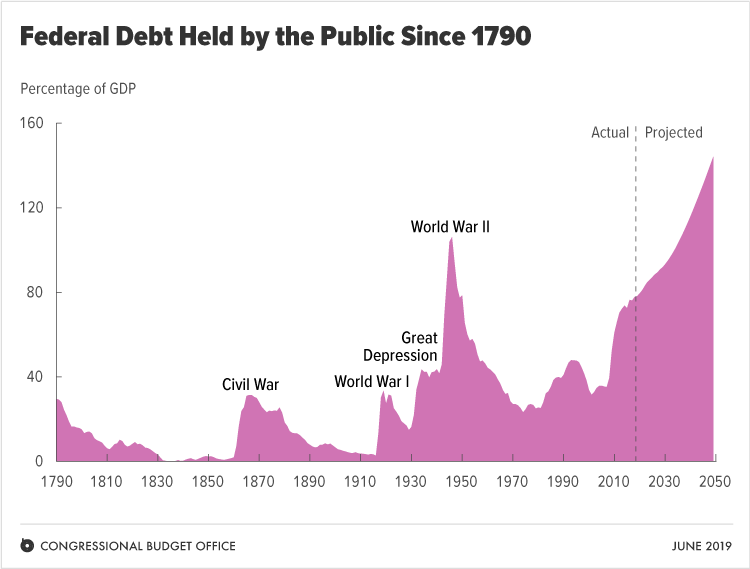 Other Possible Outcomes. The agency’s projections of debt are highly sensitive to changes in the factors underlying them. For example, 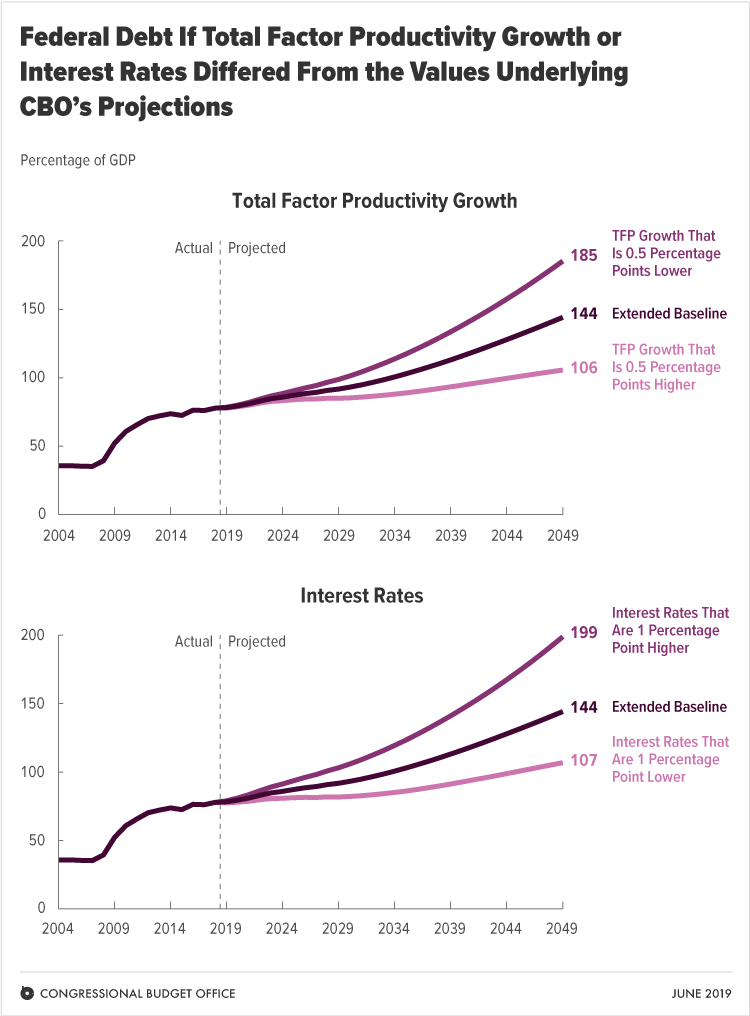 Debt Under Alternative Scenarios. If lawmakers changed current laws to maintain certain major policies now in place – most significantly, if they prevented a cut in discretionary spending in 2020 and an increase in individual income taxes in 2026 – then debt held by the public would increase even more, reaching 219 percent of GDP by 2049. By contrast, if Social Security benefits were limited to the amounts payable from revenues received by the Social Security trust funds, debt in 2049 would reach 106 percent of GDP, still well above its current level. 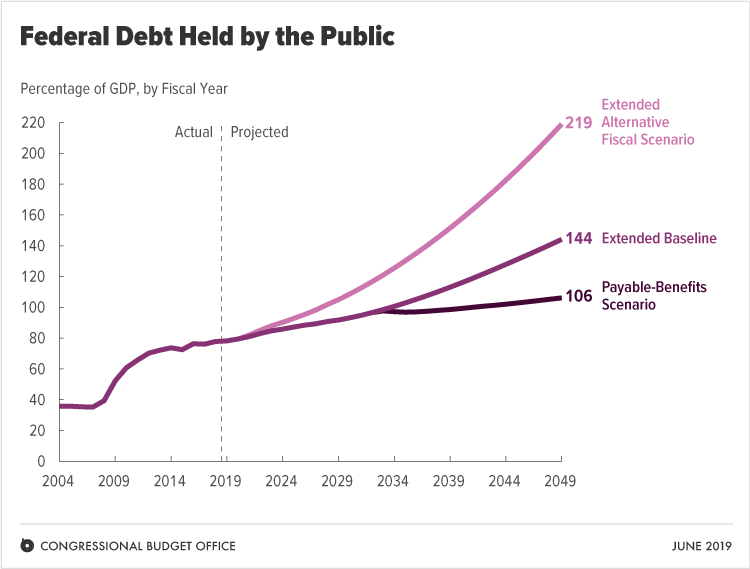 Interest Costs. The projected increase in federal borrowing would lead to significantly higher interest costs. In CBO’s extended baseline projections, net outlays for interest more than triple in relation to the size of the economy over the next three decades, exceeding all discretionary spending by 2046. 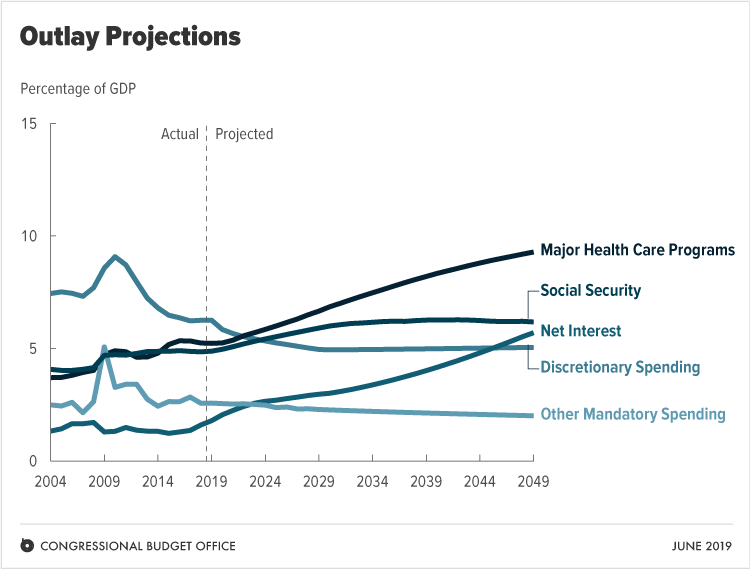 Revenues. Measured as a percentage of GDP, revenues are projected to be roughly flat over the next few years, rise slowly, and then jump in 2026 because of the scheduled expiration of certain provisions of the 2017 tax act. Thereafter, they continue to rise – but they do not keep pace with growth in spending. The factor contributing most to the long-term growth in revenues is the increasing share of income that is pushed into higher tax brackets. 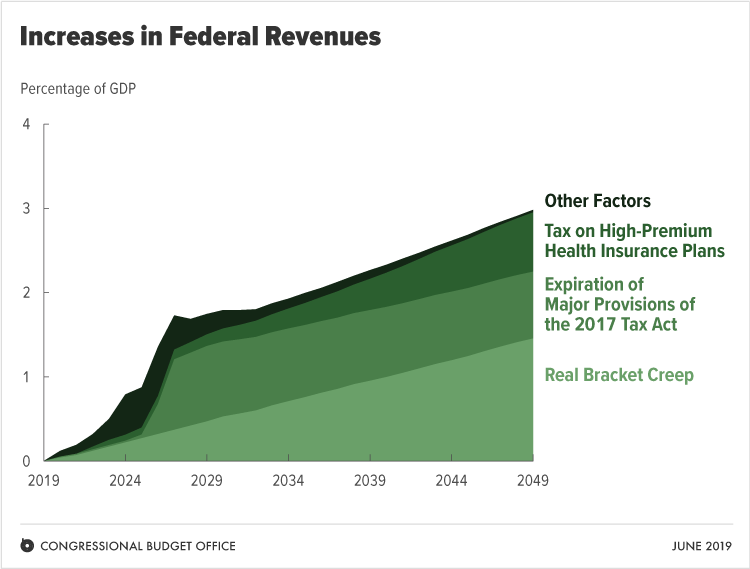 Comparison With Last Year’s Projections. Debt as a percentage of GDP in 2048 is 11 percentage points lower in this year’s extended baseline projections than it was in last year’s. That difference is largely driven by spending projections that are lower than they were last year. 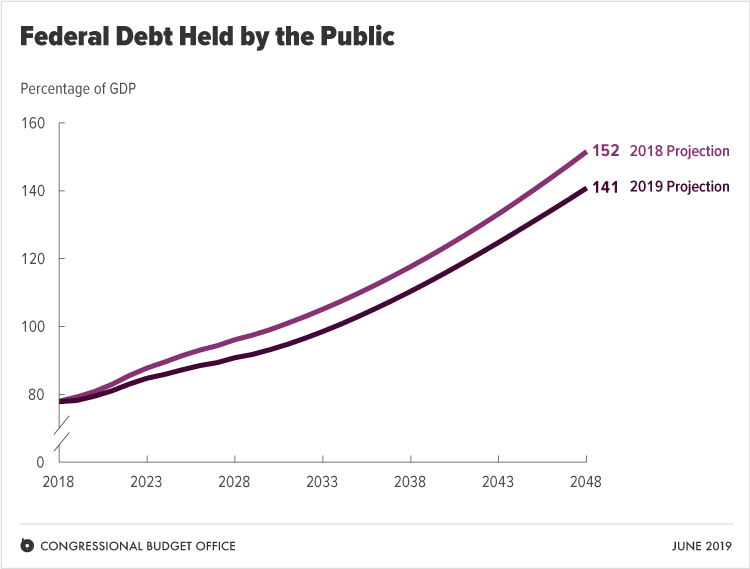 Editor’s Note: The above commentary from the original post was written by the Congressional Budget Office.  Please note that this complete paragraph must be included in any re-posting to avoid copyright infringement.

Share
Previous 3 Arguments For Owning Gold
Next Canadian Real Estate Price Growth Dwarfs Even the Frothiest of U.S. Cities – Check it Out