[In spite of all that is seemingly wrong with the U.S. economy] I think we are on 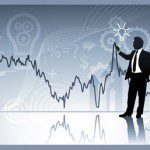 the verge of entering the euphoria stage of this cyclical bull market where traders become convinced that QE3 is a magic elexir with no unintended consequesnces. [As such,] I see a strong acceleration and a significant and sustained breakout above the S&P 500 September high of 1475. (Words: 264 + 3 charts)

[Those investors]… that have convinced themselves that QE is having less and less effect are about to be caught off guard as we move into the  euphoria phase of the bull market. During this final phase, the character of the intermediate cycles should change and instead of a modest move  above the prior intermediate top we should see a strong acceleration and a significant and sustained breakout above the September high of 1475.

You can see in the chart below in  2006/07 the intermediate cycle accelerated rapidly past the prior  intermediate top at 1326 in a classic runaway move. While this certainly felt good at the time, it was the beginning of the end as the housing  and credit bubbles began to implode.

I think we are on the verge of something similar as I believe QE3 will  drive the market high enough to test or marginally break the all-time  highs. However, it’s also going to start an upward spiral in commodity  inflation that will eventually poison this fragile economy and be the  straw that breaks the camel’s back.

This article compares the 2012 year-end price forecasts for the S&P 500 from leading research sources with where the index is today, what various statistically generated price probabilities say about the year-end price [and, as such, how we plan to allocate our assets in the interim.] Words: 1445

Share
Previous Fiscal Cliff: 1 Step Backward – Then 2 Steps Forward (2K Views)
Next Interested In What Oil Prices Will Be In 2013 – and Why? Then This Article Is For You (+2K Views)