Improving Investor Sentiment Appears To Be Justified – Here’s Why

Lorimer Wilson October 21, 2017 Comments Off on Improving Investor Sentiment Appears To Be Justified – Here’s Why 1,558 Views

While earnings growth over the next year are likely to decelerate,

momentum in the global economy is supportive of continued solid growth. Improving investor sentiment, in the form of the ongoing rally, appears to be justified. Will it continue in the year ahead?

This article is an edited ([ ]) and revised (…) version of the original written by Jim McDonald to ensure a faster & easier read. It may be re-posted as long as it includes a hyperlink back to this revised version to avoid copyright infringement.

While investor sentiment has been improving, many remain skeptical about the current market rally and the resulting outlook. We have analyzed returns across the major equity markets this year, and earnings growth has been the biggest contributor by far.

While earnings growth over the next year is likely to decelerate, momentum in the global economy is supportive of continued solid growth.

Inflation is one of the great variables in the outlook; central bankers and investors have been waiting for its re-emergence for years (while our Stuckflation theme has predicted continued torpor).

We formally learned of the U.S. Federal Reserve’s plan to begin shrinking its balance sheet in September, but we expect the pace to be slow and the overall impact to be manageable. This will help pave the way for tapering of the European Central Bank’s (ECB’s) purchases, but actual increases in rates by either the ECB or Bank of Japan are likely far in the distance. Inertia in the inflation metrics across most developed economies has central bankers questioning their models, which we think will lead them to choose deliberation over action when it comes to hard choices in monetary policy. 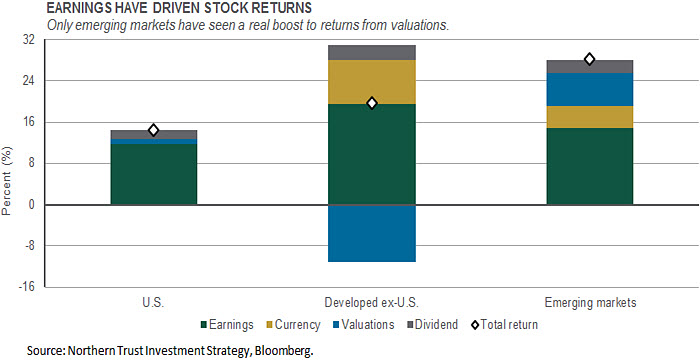 The Fed has formally announced the start of its balance sheet reduction plan. It plans to reduce holdings slowly and mechanically, initially allowing $10 billion worth of bonds to mature each month, with an eventual upper limit of $50 billion per month.

We believe the Fed prefers to slowly tighten policy despite recent data showing continued modest growth and limited inflation. As a result, we believe interest rates will slowly rise across the curve and we look to position portfolios neutral relative to their benchmark duration.

Euro-area economic conditions remain solid and appear supportive for the ECB to announce the start of policy renormalization later this month. However, ECB rhetoric has remained cautious, and political developments are once again dominating the headlines.

Digging deeper into high yield’s third-quarter returns, we find they were boosted by strong returns in the energy sector. Oil prices rose over 12% to close the quarter at $52 per barrel – and drove the 8.4% return in the refining sector, a 6.5% return in the oil field services sector and a 5.0% return from exploration and production companies. These three sectors comprise only 10% of the high yield market, but they accounted for more than 25% of the market’s return for the quarter.

Now that oil prices appear to have more stability (at around $50) and the energy sectors have become more fairly valued, outlying sectors are less likely to drive returns. High yield portfolio managers likely will look to exploit issuer-level opportunities for outperformance for the remainder of the year. Because of our constructive outlook for global economic growth, we expect those portfolio managers to also receive a tailwind from steady returns in aggregate. We retained our 3% overweight to high yield in our global policy model, with our 5% overweight to high yield corporate issuers offsetting our continued 2% underweight to emerging market debt, a region where we prefer to get our exposure through equities. 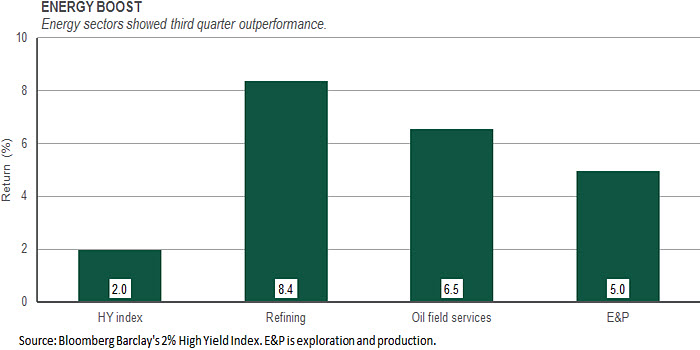 As equities have marched steadily higher in 2017, markets have departed from recent history by exhibiting low levels of volatility and lower correlations. As the chart shows, correlations between stocks rose dramatically during the financial crisis sell-off, which is to be expected as stocks are more indiscriminately sold during periods of significant weakness but correlations remained relatively elevated for several years post-crisis. Most attribute the higher post-crisis correlation to the “macro-driven market,” where central bank policy was viewed to be the driver of equity returns.

With central banks on the path toward normalization, particularly in the United States, while global growth expectations have firmed, markets have shifted their focus to company-level fundamentals. Low volatility is generally supportive of equity returns, and lower correlations provide opportunities to capture more alpha than when the market is macro-driven. While there’s a tendency to equate low volatility to complacency, given the economic backdrop and gradual central bank movement, we are less concerned that the muted volatility conditions spell trouble for equities over the intermediate-term. A small correction is inevitable, but we could have said the same thing at the beginning of the year and missed a gain 15% trying to avoid a 5% pullback. 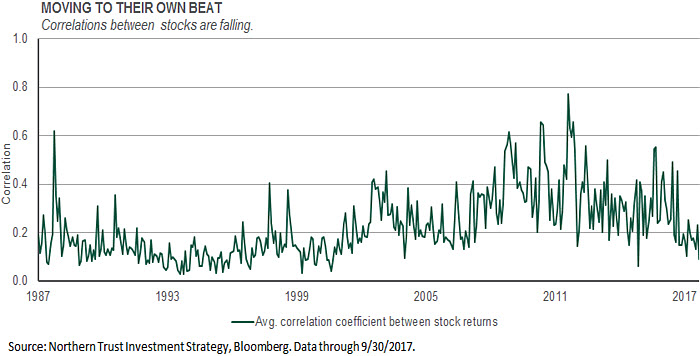 Investors worldwide have been anticipating a “global reflation trade” – global growth acceleration that would push inflation higher, bringing interest rates along with it. Recently investors have been teased with higher commodity prices, upward-trending Chinese inflation and increased central banker rhetoric about the need to unwind accommodative monetary policy. Then the September U.S. jobs report hit, showing that unemployment had fallen to 4.2% and wage growth continued to strengthen, now at 2.9% year-over-year.

However, the wait for the global reflation trade is likely to continue. While wage growth is correlated to inflationary pressures overall, low levels of wage growth show a much weaker relationship.

As the chart shows, wage growth above 4% has a 0.7 correlation with core inflation but wage growth at 4% or less has a correlation of only 0.3. Important to understanding whether higher wages lead to higher inflation is determining the productivity associated with any increase. Wage gains tied to higher productivity need not be inflationary and can actually support continued economic growth expansion – a key tenet of our Stuckflation theme.

More recently, the global reflation trade has diminished as U.S. and Chinese inflation reports have come in softer than expected. In the United States, expectations for inflation have rolled over from recent highs and investors look for inflation to be below 2% over the next 10 years. We think this cost of insurance for inflation protection is about right and remain strategically allocated to inflation-linked bonds. 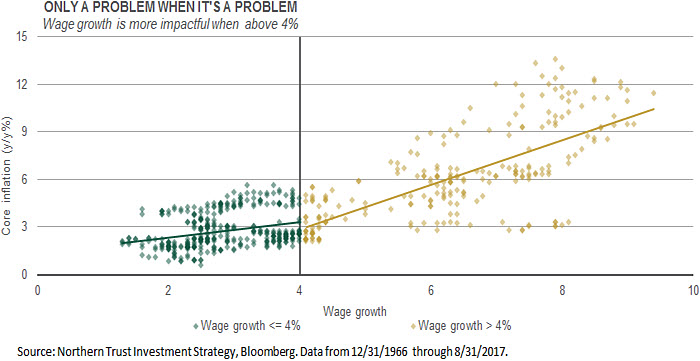 …Early in this report we decomposed the returns achieved in major equity markets so far this year. It’s a good news/less good news story. While returns have been heavily supported by earnings growth this year, growth is certain to slow and equity returns likely will follow suit. While we still expect positive returns, markets will be challenged to match the U.S. dollar-based returns realized during the last 10 months. Notably, developed markets outside the United States and emerging markets have a greater valuation and dividend cushion than U.S. markets.