Lorimer Wilson April 25, 2020 Comments Off on Gold’s Performance During Previous Recessions Suggests What To Expect This Time 839 Views

…Many investors predict the near-term future price of gold based on a number of assumptions discussed below and this article either  substantiates or refutes those assumptions, as follows:

1. Inflation rises: Inflation may be coming (given the money creation in the world), but as long as aggregate demand remains suppressed, we won’t see inflation right away. We believe that once inflation does hit, gold will almost certainly be the asset of choice. 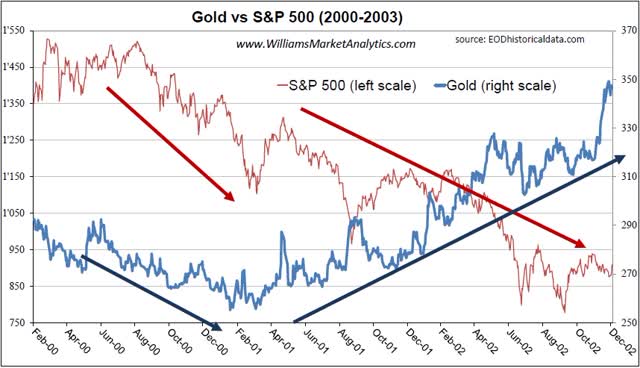 In the first nine months of the equity bear, gold fell with stocks. Then, in the remainder of the equity bear, gold de-correlated and rose into the end of the bear market. Over the 2000-2003 period, the daily correlation coefficient between gold and stocks was -0.71. In other words, betting on a near-term rise in gold prices based on falling equities prices proved to be the right trade.

Betting on the near-term trend in gold based on the direction in stocks proved to be more complicated in 2007-2009. We distinguish three different phases for gold during the period, shown in the chart below: an initial counter-trend phase, a second positive correlation phase in which both stocks and gold fell together, and a final phase of de-correlation between the two assets. 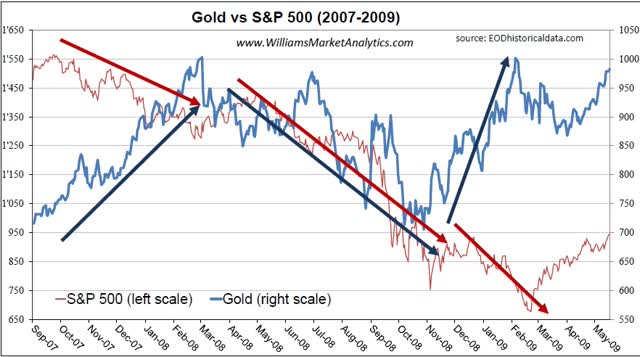 3. Treasuries rise: Over the 2000-2003 period, the daily correlation coefficient between gold and Treasury yields was -0.58, meaning that gold tended to trade in the same direction as Treasury bond prices. 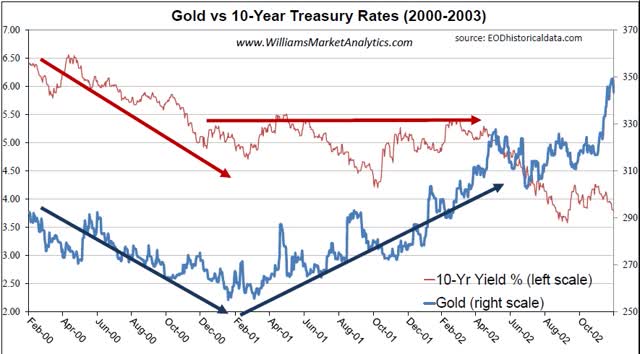 The arrows in our chart above show that in the first part of the recession, yields fell as gold price depreciated. Then, from early 2001, gold rallied even as rates were range-bound between 4.5% and 5.5%.

Over the 2007-2009 period, the daily correlation coefficient between gold and interest rates was only -0.29, meaning gold moderately traded in the same direction as Treasury bond prices (see chart below]. Both assets were considered risk-off alternatives. 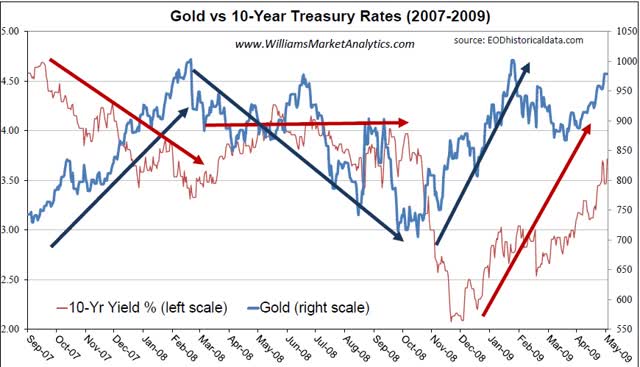 4.The USD depreciates: Over the 2000-2003 recession period, the daily correlation coefficient between gold and Treasury yields was -0.56, meaning that gold tended to trade inversely to the dollar, which is generally what investors expect. 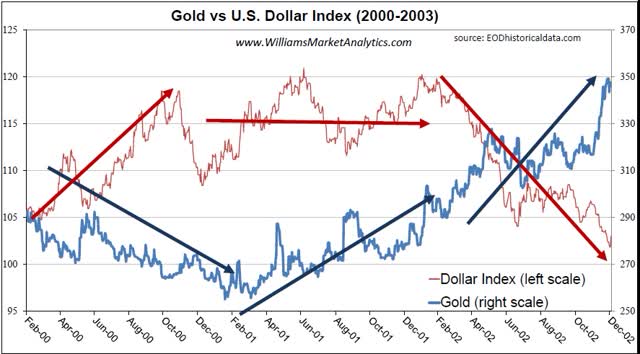 Looking at the chart above, we see the overall tendency for gold to rise when the dollar falls, but the relation also broke down frequently, if you are hoping to day-trade gold based on trends in the greenback. 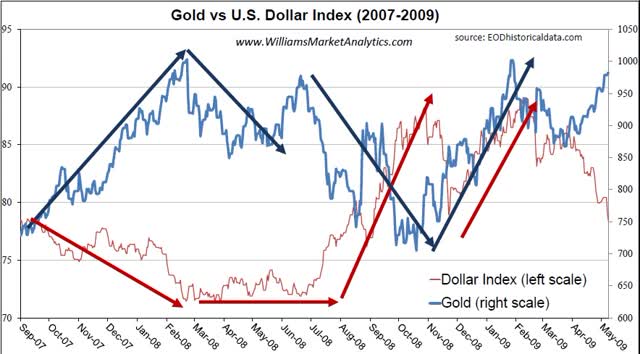 As shown by our arrows in the chart above, IF the current recession resembles 2007-2009, we would be hesitant to buy gold if our bet was on the U.S. running into debt problems and seeing pressure on the currency. During the worst part of the Financial Crisis, the dollar rose while gold fell!

Gold may make sense in a balanced portfolio for its relative de-correlation to other asset classes and lower volatility BUT, betting specifically on gold in anticipation of a crash in equities, a weakening dollar or rising yield, has a spotty track record in the prior two recessions…

The above article is an edited ([ ]) and abridged (…) version of the original article to ensure a fast and easy read.  Please note that this complete paragraph must be included in any re-posting to avoid copyright infringement.

Editor’s Note: The author’s views and conclusions in the above version of the original article are unaltered and no personal comments have been included to maintain the integrity of the original article.  Furthermore, the views, conclusions and any recommendations offered in this article are not to be construed as an endorsement of such by the editor.

1. History Says: “Gold & Silver Will Go Much Higher After This Stock Market Crash”

This article looks at the severity, duration, and recoveries of physical gold and silver in three periods that seem to most resemble what’s happening today: the Great Recession, the 1970s, and the Great Depression to see what we can learn.

2. How Does Silver Perform During (and after) A Recession? You’ll Be VERY Surprised! (+6K Views)

If you are buying silver because you expect a recession will take its price higher, you are skating on thin ice. The expectation is fundamentally flawed and there is nothing historically to support the expectation for higher silver prices during recessions.

What is driving the gold price higher and how may market fundamentals influence its price in the future?

4. Inflation: What Exactly Is It? What Causes It? How is It Measured? (+2K Views)

Exactly what is inflation, and how do we measure it? It is very important to investors, savers, and people in general, that we understand.

5. Inflation Is Back – Hyperinflation Is Coming – And It Will Have An Explosive Effect On the Price of Gold & Silver! (+3K Reads)

It now looks that inflationary pressures are starting in earnest…In the last two years, inflation has gone from 0% to 2.5% which is a 5-year high…and could easily reach 10% in the next couple of years and ultimately a lot higher as inflation turns into hyperinflation. That will have an explosive effect on metal prices.

Share
Previous Which States Are the Most – and Least – Prepared For A Recession
Next von Greyerz’ Advice Regarding Gold: “Don’t Wait For the Storm to Pass – Learn to Dance In the Rain!”