Miner ETF (GDXJ) will create an opportunity to buy some of the world’s most valuable junior gold companies for pennies on the dollar all thanks to a coming tsunami of selling that has nothing to do with the companies themselves… [Frankly,] I expect the opportunity around the corner will be so big that I’m getting millions of dollars of my own money ready to deploy…[Let me explain what’s happening and why I am so very bullish.]

The comments above & below are edited ([ ]) and abridged (…) excerpts from the original article written by Marin Katusa (KatusaResearch.com)

Excessive Growth In GDXJ Popularity Led To A $4 Billion Problem

Investors reckoned that by holding GDXJ, they got “juice” on the upside, but not the downside risk associated with owning just one or two gold juniors. [As a result]…the growth in market capitalization for GDXJ grew by 480% from January 2010 to May 2017 (see chart below)…but, unfortunately, this tremendous growth has become a $4 billion problem for the ETF company. 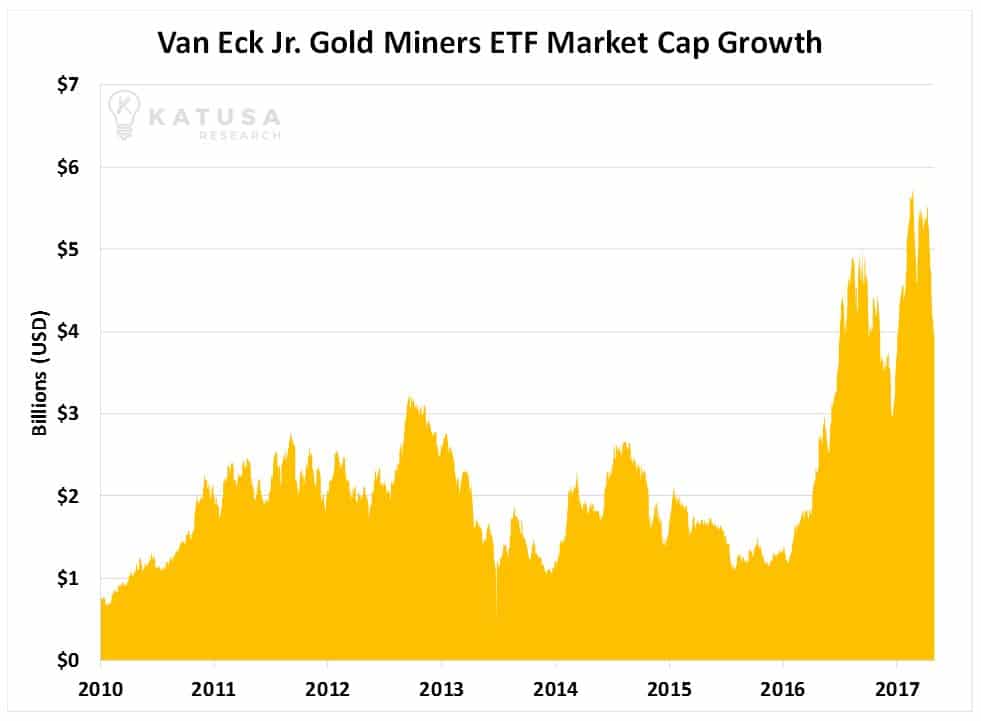 GDXJ buys and sells companies according to changes in an underlying index created by VanEck called the MVIS Global Junior Gold Miners Index. The fund [is supposed to] essentially mirror the activity within the index fund…[but, with the major growth in GDXJ popularity]…it had too much cash and not enough places to put it.

Why? Because many junior gold stocks are Canadian [and,] as soon as an entity owns more than 20% of a Canadian-listed company, regulations restrict its trading ability and make holding the position a general pain in the behind unless you are in it for the very long haul.

VanEck didn’t want to own 20% of any gold stock, so it restricted itself to ownership stakes in individual names to “just” 19.9%…[which] essentially capped how much VanEck could invest into each gold company… and eventually caused it to run out of stocks to buy.

No sane financial firm will willingly turn down cash to manage and collect fees on so, instead of leaving the cash on the sidelines, Van Eck used the cash to invest in companies with larger market caps, known as the mid-tiers. The GDXJ most notably began to deviate away from the index in September 2016 when it began purchasing shares in the large mid-tiers (+$1 billion market cap), while its underlying benchmark index MVIS Global Junior Gold Miners Index did not. GDXJ was created to give investors exposure to juniors, but because so much capital flowed in, the “Gold Junior ETF” became more of a “Gold Mid-Tier” ETF.

The MVIS Global Junior Gold Miners Index is set to be reviewed and rebalanced on June 9, 2017 and between now and then, I expect there to be significant volatility in all the sub-$1 billion market cap junior and mid-tier gold companies [in the index].

Companies’ shares will be sold by GDXJ so the new ETF can become a “large mid-tier to small major” gold ETF and, once this is done, and the new positions are bought, the GDXJ will rebrand itself accordingly. Then, within 12-24 months, a new ETF for juniors to replace the demand of the old GDXJ will be created. This “reshuffling of the ETF deck” will create a great opportunity for informed gold stock speculators…

To qualify for [inclusion in] GDXJ:

The index will be reviewed every quarter to make sure the index is working properly [with the extent of constituent participation rebalanced every quarter].

By increasing the maximum size allowed into the index, mid-tier companies such as Yamana Gold, Pan American Silver and Eldorado Gold will be included in the index [but to enable that to happen] – to free up cash to pay for these new investments, holdings in every other company within the index will need to be reduced.

Small gold companies that don’t have enough size or liquidity to be included in the new fund will be hit with massive amounts of selling. Again, the GDXJ fund owns more than 19% of some junior [and] when 19% of a small company’s “float” is sold, it can send its stock price down 20%… 30%… even 50% in a month. I know this might sound crazy, but it happens often in thinly-traded junior resource stocks…

The forced selling I expect to see in many junior gold stocks will force share prices much lower. Add in the hedge funds that are short selling before the GDXJ starts selling its position, and this will create extra selling. This will create an incredible opportunity, but only after the selling pressure of the hedge fund short positions and the GDXJ subsides.

It also goes much deeper than just the index itself rebalancing. Other ETFs which benchmark against the MVIS Global Junior Gold Miners Index will also be forced to reposition themselves accordingly or change their fund mandate, including other funds hitting stop losses, and the selling will provide an ideal environment for alligator buying.

This forced selling will cause some gold stock investors to hit stop losses and dump shares:

Eventually an “avalanche” of selling will hit the market and it will have absolutely nothing to do with the underlying values of the gold companies themselves. The selling avalanche will strictly be a function of a market warped by robotic, unthinking computer programs.

This selling will exhaust itself in a final “last gasp” puke-out where the final few dozen desperate, ignorant sellers sell their shares with no regard to their intrinsic value – and that will create an incredible stock market anomaly

Those words should be music to your ears… because that is the kind of opportunity any investor worth his salt looks for in the market.

To capitalize on the forced selling I expect we’ll see, I’ve taken the list of GDXJ holdings and created my own method for analyzing their assets, liquidity, market values, and various other qualities.

A key part of my team’s analysis is something called the “Days to Liquidate Position” number.

This is the number of days it would take to sell the fund’s entire position in a stock based on the number of shares the fund owns and the stock’s average daily trading volume of the past 90 days.

To be clear, the fund won’t liquidate or reduce positions based on the time frames in our table. This is just a measure of how much of a stock the fund owns in relation to its typical trading volume. You can think of it as a measure that factors in how much water needs to be drained out of a bathtub and the size of the drain.

This measure is critically important to our analysis because simply looking at a GDXJ’s holding’s market value in a vacuum doesn’t tell you enough. We need to know how much of it GDXJ owns and what kind of trading liquidity it has.

The higher a stock’s Days to Liquidate Position number, the more selling pressure from GDXJ that stock will experience, should GDXJ make a major move in it.

We expect stocks with very high Days to Liquidate Position ratings will get hit the hardest.

For reference, here is a snapshot of how our spreadsheet looks for 20 GDXJ holdings that are expected to be reduced: 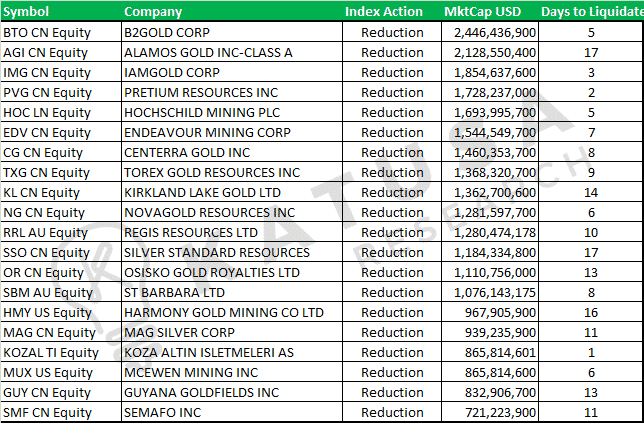 (In addition to using Days to Liquidate analysis, I’m also tracking the actions of the short sellers I described above. I plan on using these guys as my allies and I will use their negative energy and short dollars to my advantage. I am tracking the short positions in every gold company in the GDXJ fund and I update this data constantly.)…