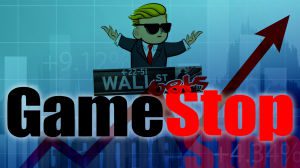 ….[As you are most likely well aware,] GameStop’s (GME) stock has exploded over the past few days. After trading below $20 per share for most of December and the first few weeks of January, it’s now trading at almost $200/share. Why is it suddenly soaring?…[Well,] it’s a classic short squeeze, but this time, Reddit-style. Here’s a closer look at what that means, how it works, and why it can cause massive spikes in stock prices like we’ve seen this week. 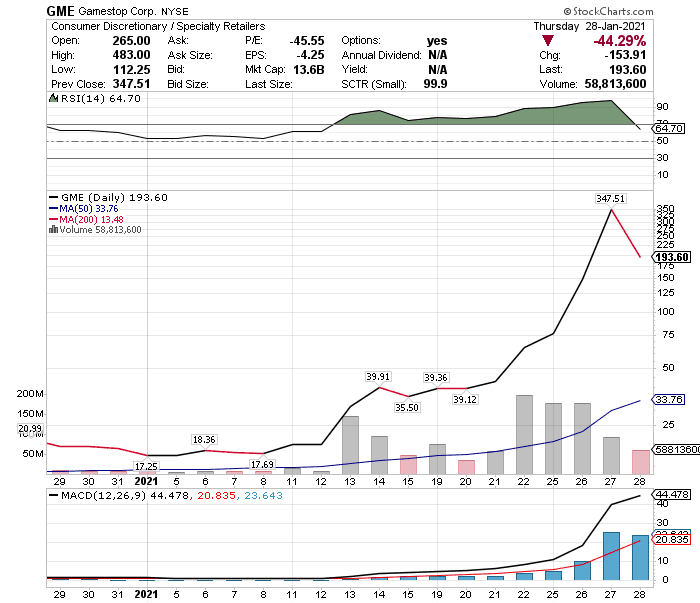 How and Why Do Investors ‘Short’ Stocks?

When someone shorts a stock, they’re trying to sell something that they don’t actually own because they think they can make money later by buying it back at a lower price. Hedge funds do this a lot, but short-selling can be very complicated and risky for individual investors to attempt.

Here’s how it works: If you believe a stock’s value will increase over time, you want to buy it and hold it, which is known as taking a “long” position but, if you anticipate that a stock’s price will decrease, you could take a “short” position. To do this, you would borrow shares of the stock and sell them to another investor (even though you don’t own them). If you can sell the stock to that new investor for a higher price than what it will cost you to purchase the shares from the original owner to cover your borrowing, you will profit from short-selling.

If the stock’s price keeps rising, though, the short seller will have to repay the borrowed shares at a higher price than they sold the shares for. Because stock prices can (in theory) rise indefinitely, short-selling can lead to potentially  unlimited losses. With a long position, by contrast, an investor’s potential gains are unlimited but the most you could lose is 100% of what you invested.

A short squeeze can happen when there is enough increased demand for a stock that also has a lot of sellers making short sales (in other words, it has a high short interest ratio). That perfect storm of technical factors can push stock prices into the stratosphere–people are buying the shares, which forces the short sellers to buy the stock in an attempt to cut their losses so everyone is buying–the long buyers and the short sellers, and often a stock with a troubled future that attracts a short seller will not have a lot of trading volume, so small changes in demand can move the price quickly.

What Happened With GameStop?

Prior to about two weeks ago, Gamestop (GME), the stock, had more or less been a reflection of Gamestop, the business, which had been sucking wind for quite some time. That made some very obvious sense, because Gamestop is a physical retailer of a product generally sold over the internet… Even before the pandemic consumers were done with Gamestop…

There were a lot of institutional investors betting that GameStop would go the way of BlockBuster. Notably, as of Dec. 31, 2020, the short interest as a percentage of the float for GameStop was 260% so there were many more people shorting the stock than there were shares available in the market. This is the perfect environment for some goofy trading to happen…

Enter r/WallStreetBets, a Reddit forum for stock traders, with over 3.4 million users. People on the forum began talking up GameStop, for a variety of reasons, which led to massive coordinated buying. As one investor explained  to CNBC, some of the investors in the forum are fundamentally driven investors who believed that GameStop could turn its fortunes around, particularly after e-commerce pet food company Chewy founder Ryan Cohen took an interest in the firm last August BUT many traders seem to be driven by a sort of anti-Wall Street backlash–perhaps believing that it’s entertaining to see big hedge funds struggle at the hands of retail traders. Many traders purchased calls, which allow them to apply even more upward pressure on the short sellers per dollar spent. Whatever the reason, current fervor around GameStop has driven the price up massively over the past few days.

This type of speculation can be thrilling–it creates an energy that feeds off itself. As a founder of the WallStreetBets Reddit forum explained in a Kiplinger’s article, “WSB treats stock trading like a video game” and with one-click trading apps like RobinHood, stock trading can feel like a video game, too…[but] investing shouldn’t feel like a game, especially if you’re committing large sums of money to it. There’s a big difference between gambling and investing, and if you’re only buying shares of a business because its stock price has skyrocketed, you’re not investing. My advice–please don’t fear that you’re missing out on the GameStop trade, and be very skeptical of any other stock that seemingly everyone is piling into. [Source of the above commentary is from Morningstar.com.]

Want To Play? Here Are Your Best Choices

Short squeezes will remain a big story in the financial-news media until heavily shorted stocks that have been pushed up by individual investors connected through social media come crashing back to earth.

The biggest “winners” during this craze have been GameStop, up 1,745% for 2021 through Jan. 27, and AMC Entertainment, which has popped a more modest 839%. There are many others listed, below.

[According to] Brad Lamensdorf, who co-manages the AdvisorShares Ranger Equity Bear ETF…a percentage of short-sales to total shares available for trading of “over 30% to 40% is outrageously high.”

Among the Russell 3000, there were 68 stocks with at least 25% short interest as of the close on Jan. 27, according to FactSet. The data provider uses the total float at of the end of the previous month as the denominator, but the numerator — the number of shares sold-short — is updated twice a month, typically on the 25th day of the month. So the data is rather fresh, and the percentage short for GameStop was down to 120% from 138% only two days earlier, according to FactSet’s data.

There is another way to look at short exposure — dollars, rather than percentages. If we look at it that way, Tesla Inc. (TSLA) -3.32% is the most heavily shorted stock, even with short interest of 7.4%. The company’s market capitalization was $819 billion at the close on Jan. 27, making for $60.9 billion in short positions.

According to FactSet’s data, there are 15 U.S. companies with at least $3 billion in short positions whose shares have risen by at least 20% during 2021, namely:

GameStop tops the second list as well but, even if a short percentage is relatively low, as it is for Tesla, there is a lot of money betting against the stock. Others of note on the second list include Plug Power Inc. (PLUG) +1.33%, which makes hydrogen fuel cells and is 16% (or $4.1 billion) sold short; DoorDash Inc. (DASH) -4.80%, with $4.4 billion (8%) in short positions; and even coronavirus-vaccine maker Moderna Inc. (MRNA) +2.45%, with $4.7 billion (also 8%) in short positions. Beyond Meat Inc. (BYND) -6.40%, a constituent in the munKNEE Pure-Play Plant-Based Food Stocks Index, made both lists, with 43% of shares outstanding sold short, for $5.2 billion in bets against the stock. [Source of the above commentary is from MarketWatch.com]

How Does This End?

…The battle over GameStop has taken on something of a David vs. Goliath feel, with some people outside of finance painting it as a reckoning for parts of Wall Street. Never before has a group of amateur investors taken on a hedge fund like this and won.

There is some belief that WSB signals the arrival of a powerful new force as large numbers of retail investors find influence by acting in concert or following one another into a big trade. That may serve as a check or balance on other large forces, such as hedge funds, which are used to throwing their weight around without ordinary investors affecting a price.

Right now, the speculation activity is only around a few companies, which isn’t that uncommon, but the broader concern comes when what are known as retail investors — amateurs buying stocks for their own personal gain — become overly exuberant and inflate stock prices, sometimes by taking out loans to buy shares.

In addition, some skeptics point to the situation around GameStop and other companies as evidence that the stock market has reached a dangerous level of enthusiasm and speculation. [Source of the above commentary is from NBCnews.com]

Editor’s Note:  The original sources of information for this post as highlighted above have been edited ([ ]) and abridged (…) for the sake of clarity and brevity to ensure a fast and easy read.  The authors’ views and conclusions are unaltered and no personal comments have been included to maintain the integrity of the original article.  Furthermore, the views, conclusions and any recommendations offered in this article are not to be construed as an endorsement of such by the editor. Also note that this complete paragraph must be included in any re-posting to avoid copyright infringement.

munKNEE.com has joined eResearch.com to provide you with individual company research articles and specific stock recommendations in addition to munKNEE’s more general informative articles on the economy, the markets, and gold, silver, psychedelic drug stock and cannabis investing.
Check out eResearch. If you like what you see then…